The pope and several other world leaders commemorate the first International Day of Human Fraternity.

“Today, there is no time for indifference,” the pope said Feb. 4 at a virtual event commemorating the first International Day of Human Fraternity.

The pope was among several world and religious leaders who took part in the Feb. 4 virtual event, which was hosted in Abu Dhabi, United Arab Emirates, by Sheikh Mohammed bin Zayed Al Nahyan, the crown prince.

Among those taking part in the online global meeting were Sheikh Ahmad el-Tayeb, grand imam of al-Azhar University, and António Guterres, secretary-general of the United Nations. 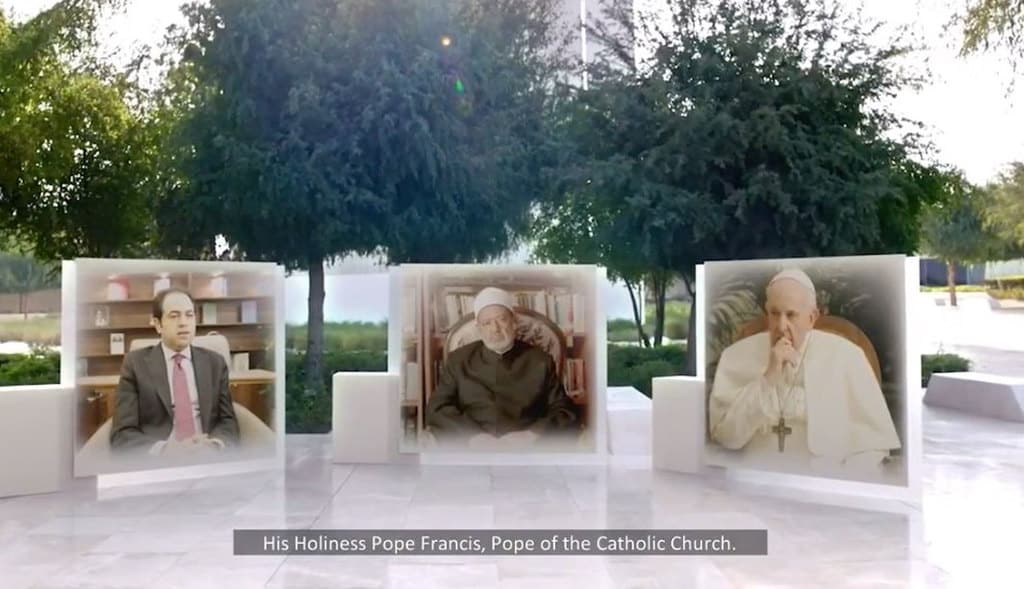 The date chosen for the event marks the day in 2019 that Pope Francis and Sheikh el-Tayeb signed a document on promoting dialogue and “human fraternity” during his apostolic visit to the United Arab Emirates.

The Higher Committee of Human Fraternity was established after the pope’s visit to implement concrete proposals toward fraternity, solidarity and mutual understanding proposed in the document.

The event also included a presentation of the committee’s Zayed Award for Human Fraternity to Guterres and to Moroccan-born Latifa Ibn Ziaten.

Accepting the award, Guterres thanked Sheikh el-Tayeb and Pope Francis for “pushing humankind to come together in unity, in dialogue to promote peace, to promote fraternity, to promote the unity that is necessary to address all the challenges to defeat hate and to make sure that human solidarity wins the battles we are facing.”

Ziaten was honored for her work in France in promoting peace and dialogue to young people who often fall prey to extremist ideology. Ziaten established the Imad Association for Youth and Peace, which she founded after her son, a French soldier, was murdered in 2012 by a Muslim extremist in Toulouse.

Congratulating her for the award, the pope said that despite the pain of losing a child, Ziaten risked her life to “dare to say, ‘We are brothers and sisters’ and to sow words of love.”

“Thank you being the mother of your son, of so many boys and girls; for being a mother of this humanity that is listening to you, learning from you the path of fraternity,” he said.

Thanking the pope and Sheikh el-Tayeb for the award, Ziaten said the recognition “will really help me in my fight, my work today.

“I lost a son, but today I reach out to many children. Today I’m a second mother to many children I saved in detention centers, in homes, in schools so they don’t fall into hatred,” she said.

In his address, the pope began by greeting participants as “sisters and brothers” and affectionately greeted Sheikh el-Tayeb as “my brother, my friend, my companion in challenges and risks in the struggle for fraternity.” 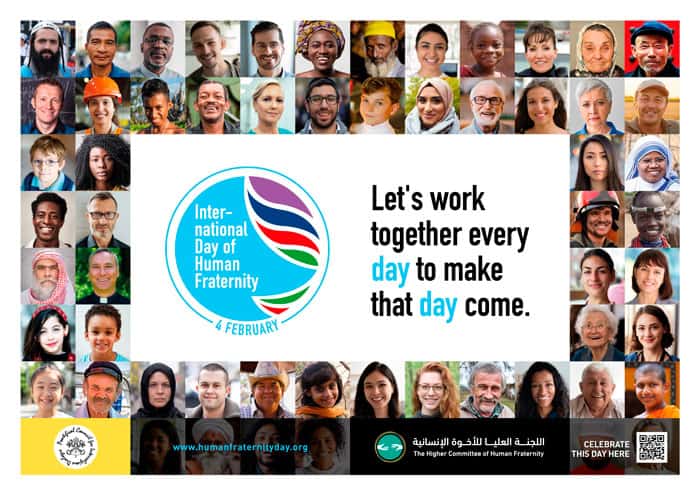 This is a promotional image for the Feb. 4 International Day of Human Fraternity. Pope Francis was among several world and religious leaders who participated in a virtual meeting Feb. 4 to mark the celebration, which has been established by the United Nations. (CNS photo/Vatican News handout)

The pope thanked the grand imam “for his company on the path of reflection and the drafting” of the document on human fraternity.

“Your testimony helped me a lot because it was a courageous testimony. I know it was not an easy task. But with you we could do it together and help each other. The most beautiful thing of all is that first desire of fraternity turned into true fraternity. Thank you, brother; thank you,” he said.

The pope also thanked Judge Mohamed Mahmoud Abdel Salam, secretary-general of the Higher Committee of Human Fraternity, calling him “l’enfant terrible” of the project, a French expression meaning a successful person who uses unorthodox or innovative methods to achieve their goals.

The pope thanked Salam for his efforts and lauded him as “hard-working, full of ideas” and one “who helped us to move forward.”

Pope Francis said the International Day of Human Fraternity was a moment of listening, of sincere acceptance and “of certainty that a world without brothers and sisters is a world of enemies.”

“It not only takes a war to make enemies,” the pope said. “It is enough with that technique—it has become a technique—that attitude of looking the other way, of getting rid of the other as if he or she didn’t exist.”

Featured image: A screen capture shows Pope Francis attending a Feb. 4, 2021, virtual meeting marking the International Day of Human Fraternity, a new effort to promote dialogue between cultures and religions. The pope was among several world and religious leaders who participated in the meeting. (CNS photo)