While the land is suitable for growing crops in rural northeastern Nigeria, people there are close to starving because of ongoing violence, said a Catholic Relief Services official.

Daniel Thompson, who works for Catholic Relief Services in Maiduguri, capital of Borno state, said the desperation of the children begging on the streets of Maiduguri, and their growing numbers, is shocking. “And if the destitution here, in the biggest city in the northeast, is so bad, then just imagine how devastating it is in the smaller towns and rural areas,” he said.

The Boko Haram insurgency, which began more than a decade ago, has killed more than 36,000 people and displaced 2 million in northeastern Nigeria.

More than 30 million people in over 30 countries are “just one step away from a declaration of famine,” U.N. Secretary-General António Guterres told a March 11 Security Council meeting on conflict-driven hunger. Famine and hunger “are concentrated in countries affected by large-scale, protracted conflict,” he said. 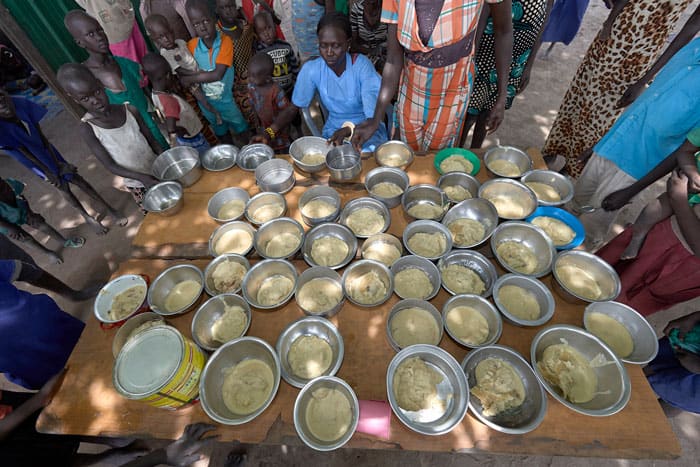 Thompson said more than 2.1 million people have sought safety by moving into the cities and towns of Borno state. He said that, “with armed insurgents moving freely outside the towns, farmers cannot cultivate their crops.”

As well as COVID-19-related restrictions on movement, the government does not allow fertilizer to be brought into the area because it can be used to make explosives, and this ban makes growing crops even harder for those still trying, he said.

People who have been “cut off from making a living from farming and fishing” and moved into urban areas “are unable to find productive livelihoods there and don’t have money to buy food,” Thompson said. Also, food prices have risen steeply during the coronavirus pandemic, he said.

The number of food insecure people in Borno state is projected to rise to 2.7 million by August, he said.

Many families have been separated and almost 80% of displaced people in northeastern Nigeria are women and children, he said. In many cases, the men have been killed or recruited into the armed groups, but sometimes families decide that the women and children should seek safety in the towns while the men stay and try to recover their livelihoods, he said.

While it may be comparatively safe in the towns, women and children who arrive there without knowing anyone are particularly vulnerable to sexual assault and kidnapping, Thompson said. Nigeria has seen many kidnappings in recent years, the most notorious in 2014, when jihadist rebels abducted 276 girls from the secondary school in Chibok. More than 100 of those girls are still missing. 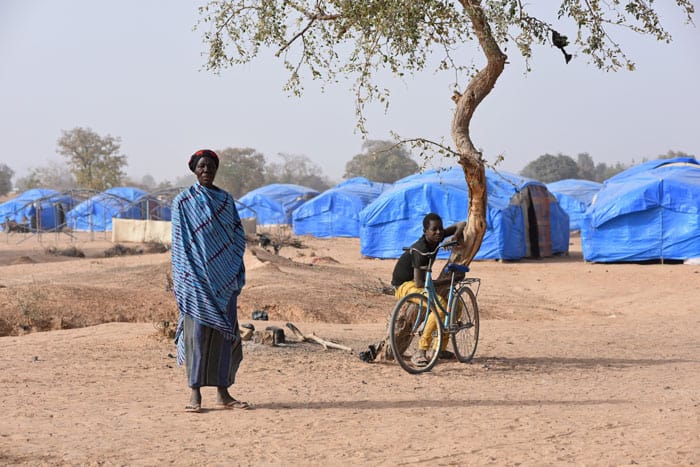 A displaced woman and young man are seen at a camp in Pissila, Burkina Faso, Jan. 24, 2020. Parts of Yemen, South Sudan, Burkina Faso and Nigeria are close to or already facing famine. Other countries face severe food insecurity or worse. (CNS photo/Anne Mimault, Reuters)
In parts of Yemen, plagued by years of civil war, “many children are starving,” said Bishop Paul Hinder, who heads the Apostolic Vicariate of Southern Arabia from Abu Dhabi, United Arab Emirates.

He told Catholic News Service March 9 that while “many people try to escape” the conflict and the severe lack of food, water and health care, they take with them the problems “they hoped to get rid of” as they move to other parts of the country in far western Asia.

Finding “secure transportation corridors in order to bring the aid to the places where it is needed” is very difficult for international agencies, and negotiations are taking place to improve this, he said.

While “the mutual mistrust of all the parties involved in the conflict has not yet been overcome … every now and then there are rays of hope,” Bishop Hinder said. The people of Yemen are “tired of the war” but are trapped by “those who are not interested in peace,” he said.

People trying to eke out a living through farming in West Africa’s Burkina Faso face problems similar to their counterparts in nearby Nigeria, said Amidou Traore, who works for Catholic Relief Services in Burkina Faso.

They have been forced to stop growing cereal crops such as sorghum and millet because “armed insurgents are able to hide in the fields and then come into the villages and attack,” he said March 11.

Recurrent droughts and floods have added to the crisis, Traore said.

“We did a small assessment recently in the northern part of Burkina Faso to see how serious the damage is for livelihoods, and most people said food insecurity is a major problem,” he said. From this, “we saw that we need to ensure that people eat before we focus on income-generating programs.” 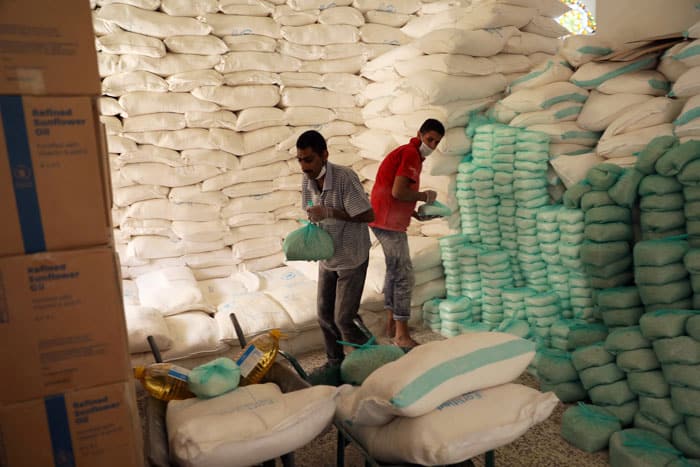 Farmers had ripe tomatoes, onions and potatoes ready for market in early 2020 when the local markets suddenly closed along with international borders in response to COVID-19, Traore said.

“They usually take the income gained from selling this produce” to buy staple foods for their families, he said, noting that “if they can’t sell, then they aren’t able to buy food to eat.”

While many markets have opened again, “it is difficult to catch up, and food prices have risen steeply,” Traore said.

Guterres told the U.N. meeting that in war-torn South Sudan, food prices are so high that “just one plate of rice and beans costs more than 180% of the average daily salary — the equivalent of about $400 here in New York.”

In South Sudan and in neighboring Sudan’s Nuba Mountains, “most people get one meal a day if they can find it,” Bishop Macram Max Gassis, retired bishop of El Obeid, Sudan, told Catholic News Service in February.

The malnourished people in the Nuba Mountains are “moving skeletons,” and their compromised immune systems expose them “to all kinds of diseases, not just COVID-19,” he said.

Most are in the northern Tigray region, where Ethiopian government troops began an offensive against Tigray’s former ruling party after regional forces attacked federal army bases in November. Thousands of people have been killed in the conflict and hundreds of thousands have been displaced.

In Zimbabwe, more than 3 million people in rural areas will need emergency food assistance through March, Catholic Relief Services said in a March 10 statement. A locust invasion, consecutive droughts and political upheaval have plunged the southern African country into disaster and “families are struggling to grow food while food prices are soaring,” it said. 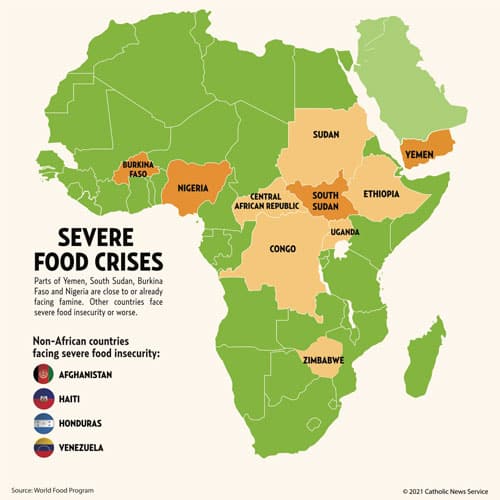