Brave Myanmar Nuns Refuse to be Silenced by Military Power

As a Kachin nun earns global plaudits for her courage, more sisters are standing with the people against oppression.

While the world is closely watching Myanmar’s crisis following the military coup, a Catholic nun in Christian stronghold Kachin state has set a shining example with her fearlessness in confronting security forces.

Sister Ann Rosa Nu Tawng earned international acclaim on Feb. 28 when she knelt in the road to plead with security forces not to shoot protesters.

The Vatican newspaper and international media highlighted the Sisters of St. Francis Xavier nun’s courage in standing her ground.

A day after her brave move, Emeritus Bishop Francis Daw Tang of Myitkyina praised Sister Nu Tawng’s courageous action for the Church and for the people.

On March 8, during a general strike against the coup held in several cities including Myitkyina, Kachin state’s capital, the nun repeated her brave act in kneeling down and pleading with police officers not to shoot unarmed civilians.

While she was kneeling down in the road, Bishop Daw Tang and another nun were helping to mediate between security forces and anti-coup protesters. 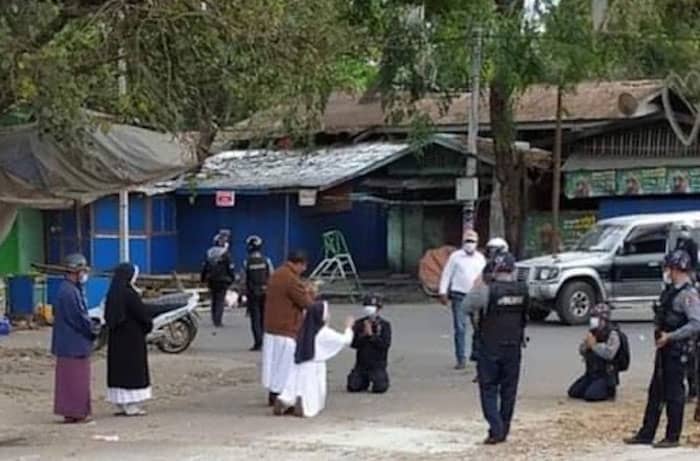 Sister Ann Rosa Nu Tawng and Bishop Francis Daw Tang plead with security forces not to crack down on protesters in Myitkyina on March 8. (Photo supplied to UCA News/Myanmar)

However, security forces began a crackdown on protesters around noon that led to two protesters being shot dead and several others injured.

These were the first deaths since the Feb. 1 coup in conflict-torn Kachin, where most of the state’s 1.7 million people are Christians including 116,000 Catholics.

At least 56 people have been killed since the demonstrations began on Feb. 6, according to the United Nations.

The Kachin nun’s bravery in the Buddhist-majority country has been saluted by many people.

Nuns have played a significant role in the nationwide anti-coup protests by marching in the streets, praying at convents and standing before churches to express their solidarity with the people of Myanmar.

In early February, nuns from Sisters of St. Joseph of the Apparition reached out to protesters and offered them drinks and snacks.

They also visited two families in Mandalay, the country’s second-largest city, where two Buddhists were killed by security forces to console them and pray for the departed souls.

Nuns from various congregations have joined laypeople and seminarians to march in the streets for a peaceful solution to the crisis by reciting the rosary and singing gospel songs in Yangon, Mandalay and Loikaw.

On March 6, nuns from the Sisters of Charity congregation reached out to six families in Monywa in central Myanmar to pray for the deceased and provide rice and cooking oil.

At least five people were killed by security forces in Monywa on March 3, the bloodiest day of the protests when 38 people died across the country. 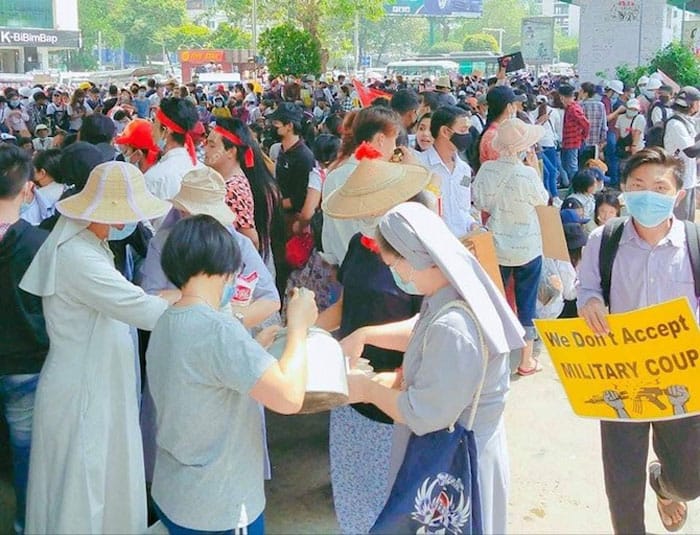 Nuns from the Sisters of St. Joseph of the Apparition congregation offer drinks and food to young protesters in Yangon on Feb. 25. (Photo: SJA via UCA News/Myanmar)

Despite church leaders asking priests, religious men, women and seminarians not to go out on the streets, many have shown acts of unity with the people of Myanmar in calling for an end to military dictatorship and a return to democracy.

A letter released on Feb. 9, signed by Cardinal Charles Bo of Yangon, president of the Catholic Bishops’ Conference of Myanmar (CBCM). and its general secretary Bishop John Saw Yaw Han, prohibited Catholic symbols and flags being displayed in demonstrations.

Amid strong objections from some clergy and young Catholics, the letter was removed from the CBCM’s official Facebook page.

Sister Nu Tawng, who has marched in the streets with fellow Christians, said she could not understand why the clergy and religious were prohibited from joining protests.

“It’s a nationwide protest against military rule beyond the boundary of religions, race and ethnicity. Why don’t we stand up for the people?” she told UCA News.

A Kachin Catholic activist based in Yangon posted on her Facebook page: “Salutations to the nun from Myitkyina but condemn the CBCM for its statement.”

“You are always my hero,” she added while sharing photos of Sister Nu Tawng.

Good Shepherd sisters in the United States and Canada said: “We pray for the people for their strength and safety. They are courageous and faith-filled people who seek and deserve respect and freedom and whose rights are being violated in this military coup.”

Quoting their foundress, St. Mary Euphrasia, they added: “If you do not speak out, if you do not sound the alarm when it is needed, you will be justly convicted by your silence.”

Featured image: Nuns from the Sisters of St. Joseph of the Apparition march in the streets of Yangon in February. (Photo: SJA via UCA News/Myanmar)