Catholic nuns, priests and laypeople among those taking to the streets to voice opposition to the coup.

Catholic nuns, seminarians and laypeople have marched on the streets to pray for peace as pro-democracy protests intensify in Myanmar three weeks after the Feb. 1 coup.

Nearly 1,000 Catholics, mostly young people, marched on the streets of Yangon on Feb. 21 while hundreds were on the streets in Mandalay on Feb. 20 to recite prayers and the rosary.

Last week nuns, priests and laypeople also took to the streets in Kayah state, a Catholic stronghold in northeastern Myanmar, to pray for peace.

Christians from other denominations joined Catholics on the streets in several cities in Kachin and Chin states to pray for peace.

Nuns have provided food and drinks to protesters in Yangon while some have organized prayer meetings at their convents. 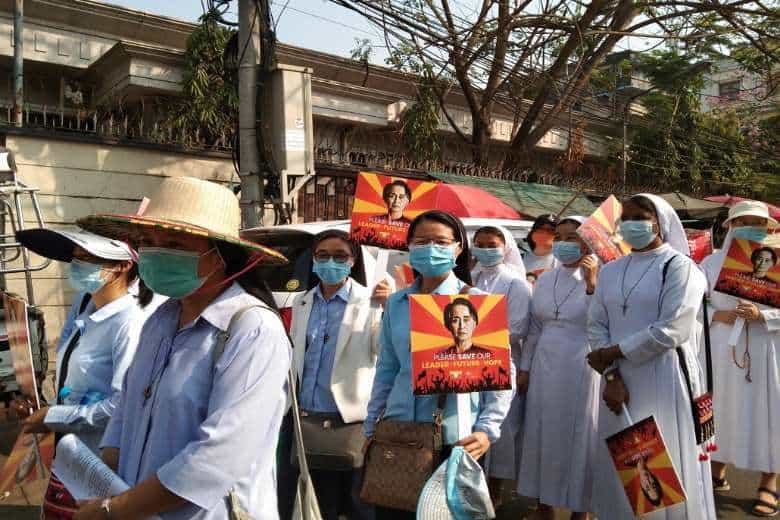 On Feb. 19, dozens of Catholic youths held a demonstration in front of the U.S. embassy in Yangon while thousands of anti-coup protests gathered in front of the embassies of China, Japan and Singapore.

Myanmar has seen daily protests from urban cities to remote areas including Christian strongholds where ethnic groups have showed their support for pro-democracy rallies.

On Feb. 20, two people including a teenager were killed and more than 20 injured in Mandalay, Myanmar’s second-largest city, during a violent crackdown by security forces on protesters.

The latest bloody crackdown has sparked strong condemnation from the United Nations, the United States, Britain and the European Union. 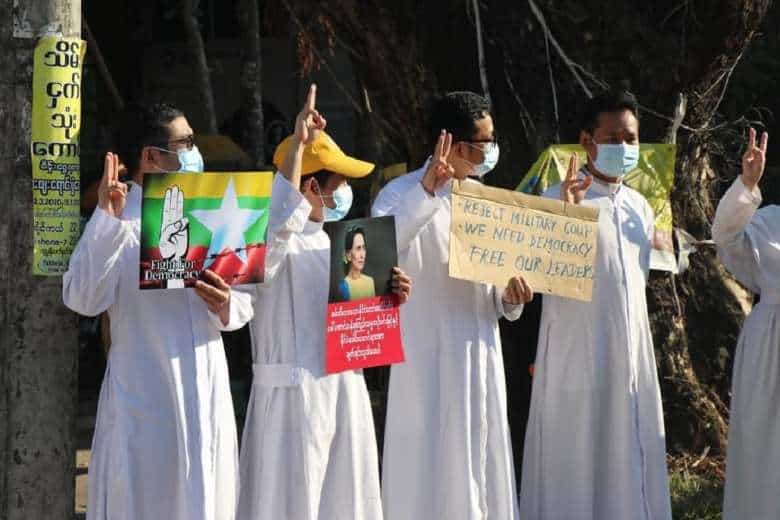 Cardinal Charles Bo of Yangon has called on the faithful to pray and fast for reconciliation as the nation is locked in hopelessness and despair through the coup.

“Let the dove of peace return to our nation. Let this nation rise up to be a new Myanmar of peace and prosperity to all. Let the rainbow of peace and reconciliation rise again.”

The outspoken prelate warned about power, money, arrogance, oppressing others in the fragile nature of our life. “The mightiest powers will fall and their graves may become history,” he said.

The Catholic Bishops’ Conference of Myanmar (CBCM) has appealed to all stakeholders to return to dialogue following the coup.

“We, Catholic bishops, send this appeal specially to those in power, pleading restraint in the streets and a return to dialogue,” it said in a Feb. 21 statement.

The statement was signed by CBCM president Cardinal Bo, executive secretary Bishop John Saw Yaw Han and other bishops from across the country. 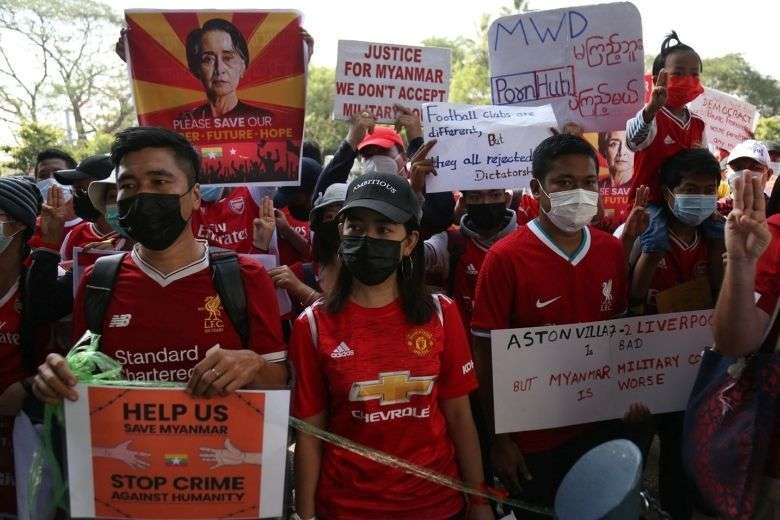 Myanmar Premier League football fans take part in a protest against the coup in Yangon on Feb. 12. (Photo: STR/AFP)

Catholic leaders decried bloody events in the streets as ‘the sad and shocking recent events have brought huge sorrow to our nation.”

The funeral of the first casualty in the protests, a 20-year-old woman, was held in Naypyitaw on Feb. 21 after she was shot in the head on Feb. 9.

“The heart-rending scenes of youth dying in the streets wound the conscience of a nation,” the bishops said. “Let not its sacred ground be soaked in fraternal blood. The sadness of parents burying their children has to stop. Mothers’ tears are never a blessing to any nation.”

The bishops noted that the nation had a great promise just a month ago: dreams of enhanced peace and robust democracy.

“Despite the onslaught of the global pandemic, the nation held an election. The world admires our capacity for managing our differences,” they said. “Today, the world weeps with us, shattered by the fragmentation of this nation once again. Our youth deserve better.”

The bishops called on all stakeholders to return to dialogue and invest their energy in reconciliation. “Healing needs to start with the release of detained leaders.” 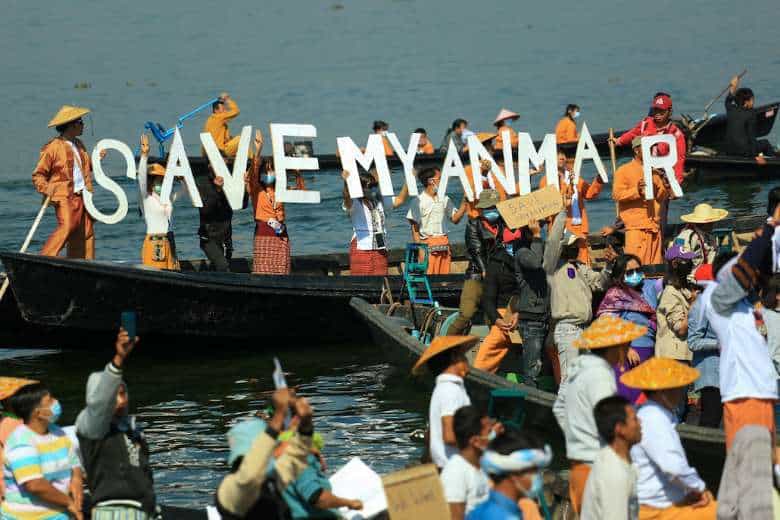 Pope Francis and Christians around the world have expressed solidarity with the people of Myanmar and called on the military to release all detained civilian leaders including Aung San Suu Kyi.

Huge anti-coup protests were being held in several cities on Feb. 22 to show the strong public opposition to military rule.

All supermarkets, shops and markets were closed and the public were urged to join a general strike.

Good Shepherd Sisters in the United States and Canada have condemned the military coup as they are gravely concerned that conditions in Myanmar will drastically decline with “this blow to democracy.”

“We pray for the people, for their strength and safety. They are a courageous and faith-filled people who seek and deserve respect and freedom and whose rights are being violated in this military coup,” the sisters said in a Feb. 18 statement.

“We join with the international community, unanimously standing with the people of Myanmar on the side of democratic, fair and just elections and the rule of law.”

Some 640 people have been arrested, charged or sentenced since the coup, according to the Yangon-based Assistance Association for Political Prisoners.

Feature image: Myanmar musicians perform outside the British embassy during a demonstration against the military coup in Yangon on Feb. 19, 2021. (Photo: AFP)