Acomujerza cooperative, born out of the trauma of war, gives Salvadoran women the opportunity they need to support their children.

In January 2020 there was great excitement at Acomujerza, a selling cooperative in Zaragoza, El Salvador, where Maryknoll Lay Missioner Melissa Altman serves. The members were about to turn their first profit since the cooperative’s founding in 2002.

“We had just started being debt free,” says Altman. “Everyone had worked very hard so they could finally record a profit and disperse funds to the members at the end of the fiscal year, and then COVID-19 shut everything down.”

During quarantine some of the staff were able to make masks in their homes for frontline workers. While the government has begun easing restrictions, the economic toll has been profound across the country.

Acomujerza (an acronym derived from the legal name of this industrial cooperative of women in Zaragoza) provides an opportunity for community members to earn a living by producing and selling clothing and other handmade goods. The cooperative was born out of a desire of members of the social concerns ministry at Nuestra Señora del Pilar parish to help children orphaned during the country’s 12-year civil war. In the years following the war, which ended in 1992, these parishioners wanted to expand their outreach to women who needed to provide for their children. The dedication of the parishioners working with members of the Cleveland Mission Team and others led to the creation of the cooperative, which today has about 25 members.

The majority of members working at the cooperative are single moms. One of them is Esmeralda. She and her 11 siblings fled their countryside farm at the onset of the war when they were told soldiers were coming to burn everything. The family became displaced people in their own country.

After the war, Esmeralda took a job at a sewing factory, where, she says, it was common to have someone standing over her shoulder checking the pieces she made. Workers there were not even allowed to go to the bathroom when they needed. One day, she says, the workers were told they had to work through the night to finish an order. They did not get paid for overtime. 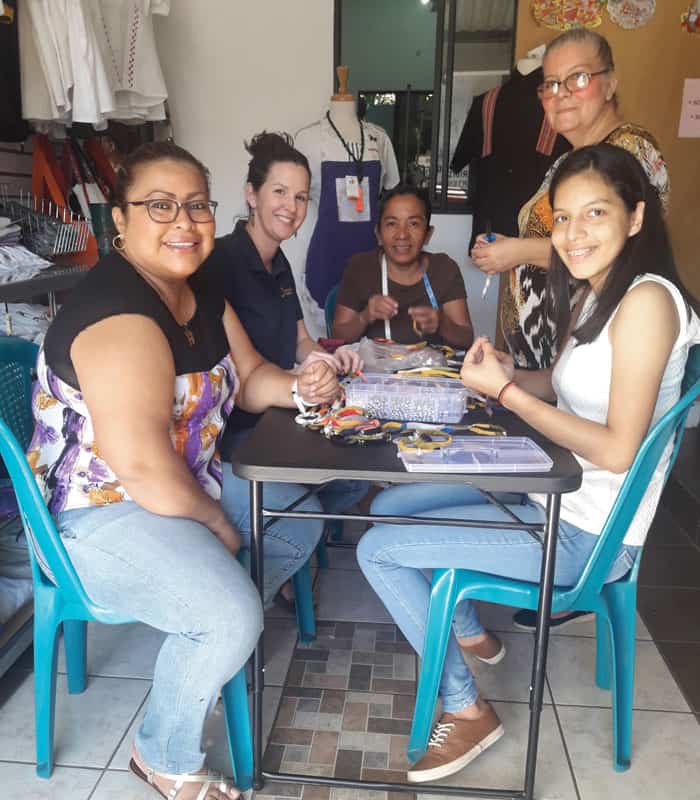 Esmeralda, who was pregnant at the time, says the workers began to talk about organizing to stand up for themselves. Soon after, the factory shut down and everyone was out of a job. However, Esmeralda had not only gained valuable sewing experience at the factory, she also learned firsthand about workplace abuse.

Her sister Paula Perez, one of the founders of Acomujerza, invited Esmeralda to join the cooperative. There, to Esmeralda’s delight, she not only acquired more sewing skills but also learned about self-esteem, working together in a group, conflict resolution and communication. Now, after 15 years at the cooperative, Esmeralda is one of the head seamstresses.

“The fact that I get to work with my friends and be part of the decision making is amazing,” she says. “Even when times are difficult, we always find a way to make it through the challenges we face.”

Altman says she sees clearly the dignity that working at Acomujerza gives Esmeralda and the others who work there. “These women are coming together against sexism, violence and trauma from a terrible civil war,” she says.

As members of the cooperative, they have a voice and they are able to make their own decisions, Altman says. However, they still struggle financially. Each worker makes only about $1 an hour and at times they find themselves scraping together pennies to pay the cooperative’s light bill.

Acomujerza members are not looking for a handout but a way to sell their products, she says. Altman’s goal is to help open up new markets for their products. She sees her most important role as assisting with product development and telling the women’s story so that those who hear it will be moved to lend their support. 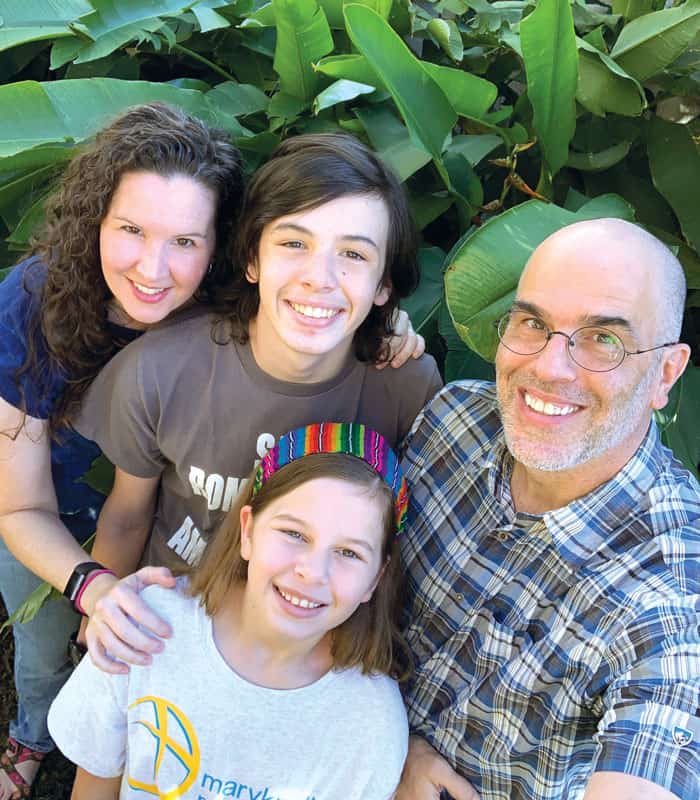 The Altmans (left to right), Melissa, Eli, Evey and Peter, are building friendships in El Salvador that are changing the lives of others and their own. (Melissa Altman/El Salvador)

Altman has also been able to connect Acomujerza to local young people and to supporters through a friendship bracelet project. The cooperative buys the fabric for the bracelets from a local family. Then the women at Acomujerza make strings and distribute them to four or five high school and college students, who make the bracelets in their homes and return them to be sold. The students are paid 25 cents for each bracelet and Acomujerza receives part of the proceeds from each sale.

The Maryknoll Fathers and Brothers, Sisters and Lay Missioners bought a bulk order of the bracelets to give out at a conference. From that order, one bracelet maker earned $75. “I did not have enough money to pay for my gym uniform; now I can buy it,” the overjoyed student told Altman. 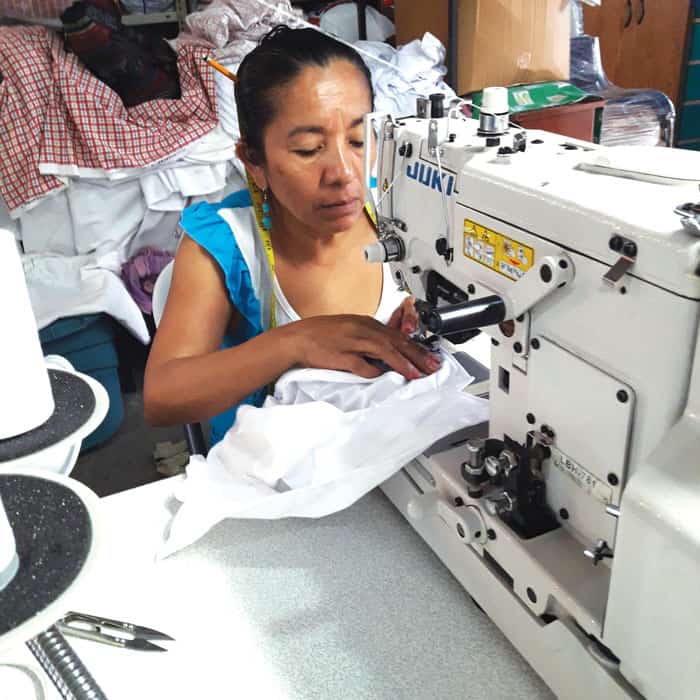 Esmeralda sews buttons on school uniform shirts at Acomujerza cooperative, where she has worked for 15 years and is now a head seamstress. (Ana Morales/El Salvador)

“These kids are using the money to lighten the burden of their parents by buying things like gym uniforms or school supplies,” Altman says. “This is another way for us to help families. We hope we can connect more people who would like to purchase these products to help the families in El Salvador earn enough money to stay in their communities and provide basic necessities for their families.”

As a mission family, Altman, her husband Peter, who works with internally displaced people, and their children, Eli and Evey, are building friendships in El Salvador that have not only changed the lives of others but their own lives as well.

“It is most impressive for me as a mom to witness my children advocate for the dignity of the friends they have come to care for in El Salvador,” Altman says. “They have friends who come from neighborhoods where the homes have dirt floors and my children have the ability to see that these friends are no different from their friends with a different economic reality. At 14, I see my son through his lived experience being the voice that says every person, no matter what their economic situation, deserves respect and dignity.” 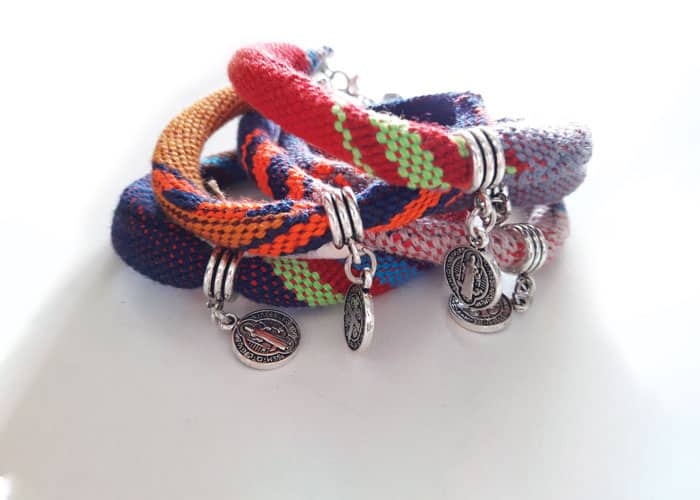 Bracelets are made out of hand-woven Salvadoran cloth. (Melissa Altman/El Salvador)

In his recent encyclical Fratelli Tutti, Pope Francis calls us to be peacemakers and to work together as a human family for the common good. He encourages us to go beyond our comfort zones to form social friendships that will help us to build a culture of peace and dialogue in order to work together to care for each other.

The Altman family is living this message. Working together with Salvadoran families, they are striving to build a more just, compassionate and sustainable world.

Carolyn Trumble is a Maryknoll mission education promoter based in Los Altos, Calif. She is a returned Maryknoll lay missioner, who served in Brazil.