Ruling on DACA among the major issues handled by high court this year.

WASHINGTON (CNS) — The busy year for the Supreme Court had the attention of the Catholic Church from major decisions it announced this past summer to oral arguments this fall around key issues impacting church belief and practice.

The court ended its previous term this summer with rulings on Deferred Action for Childhood Arrivals program, or DACA, and decisions about Catholic school teacher firings, the inclusion of religious schools in a tax credit scholarship program and an opinion about abortion providers.

In one of the most anticipated cases of the previous term, the court issued a 5-4 decision June 18 against efforts by the Trump administration to end DACA, which has enabled about 700,000 qualifying young people, brought to the U.S. as children by their parents without legal documentation, to work, go to college, get health insurance and a driver’s license and not face deportation.

The high court called the Trump administration’s attempts to end the program “arbitrary and capricious.”

The U.S. Conference of Catholic Bishops praised the court’s decision.

“To DACA youth, through today’s decision and beyond, we will continue to accompany you and your families. You are a vital part of our church and our community of faith. We are with you,” said the statement by Archbishop José H. Gomez of Los Angeles, USCCB president, and Washington Auxiliary Bishop Mario E. Dorsonville, chairman of the USCCB’s Committee on Migration. 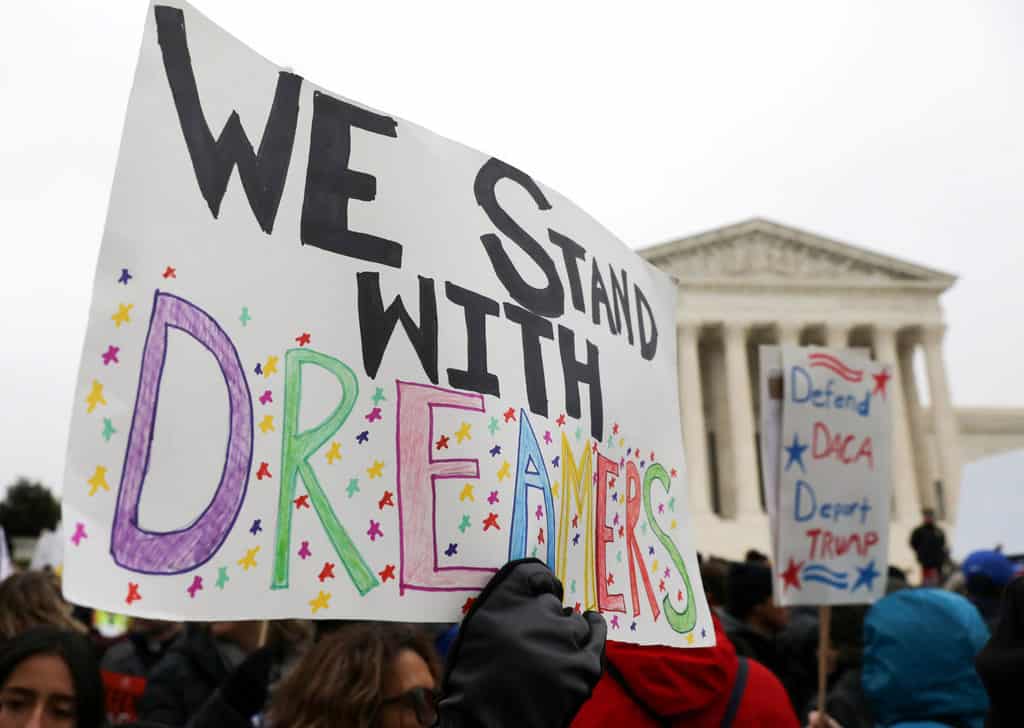 Demonstrators supporting the Deferred Action for Childhood Arrivals program, known as DACA, rally outside the U.S. Supreme Court in Washington Nov. 12, 2019. (CNS/Jonathan Ernst, Reuters)
At the end of June, in another 5-4 decision, the court said the exclusion of religious schools in Montana’s state scholarship aid program violated the federal Constitution.

When this case was argued before the court, two USCCB committee chairs said it was primarily boiled down to whether or not the “Constitution offers states a license to discriminate against religion.”

The USCCB also filed a friend-of-the-court brief, along with several other religious groups, in support of the plaintiffs, which said: “Families that use private schools should not suffer government discrimination because their choice of school is religious.”

Another case involving religious schools specifically focused on two California Catholic schools being sued for job discrimination for firing teachers. In a 7-2 decision issued in July, the court said the schools had acted within their rights.

The National Catholic Educational Association, in a friend-of-the-court brief in support of one of the schools, stressed the fired teacher, the school’s only fifth grade teacher, “bore particular responsibility for effectuating — and embodying — the integral formation that is distinct to Catholic schools.”

The court also ruled this past summer that a Louisiana law requiring that doctors who perform abortions have admitting privileges at nearby hospitals could not stand.

The opinion, written by Justice Stephen Breyer, said the case was “similar to, nearly identical with” a law in Texas that the court four years ago found to be a burden to women seeking abortions. He said the Louisiana law, similarly, was unconstitutional because it posed a “substantial obstacle” for women seeking abortions while providing “no significant health-related benefits.”

The Supreme Court ended the year with decisions in late November and early December siding with worshippers who argued being constrained by state pandemic-related restrictions on attending in-person religious services was a violation of their religious freedom.

On Dec. 3, the court said federal judges should reexamine pandemic limits on attendance at California churches, based on its decision a week earlier lifting similar pandemic restrictions on congregations in New York.

“Even in a pandemic, the Constitution cannot be put away and forgotten,” the court’s majority opinion said, regarding California churches. “The restrictions at issue here, by effectively barring many from attending religious services, strike at the very heart of the First Amendment’s guarantee of religious liberty.”

These two court decisions were reversals from the court’s action this summer when Justice Ruth Bader Ginsburg was on the bench. The court then upheld Nevada’s limits on congregation sizes, denying a request by a Nevada church for permission to have larger gatherings, like those permitted in the state’s casinos, restaurants and other businesses.

Ginsburg died Sept. 18 at age 87 and was replaced on the bench by Justice Amy Coney Barrett on Oct. 26. Barrett, a graduate of the University of Notre Dame’s Law School, is the sixth Catholic judge on the current court. Reaction to her confirmation was just as divided as it was on the announcement by the president that she was his nominee choice just weeks before the presidential election.

Barrett’s first major case, just days after she was confirmed, was on a Catholic social service agency shut out from Philadelphia’s foster care program for not accepting same-sex couples as foster parents because of the Catholic Church’s teaching upholding traditional marriage.

In this case, the justices seemed willing to find a compromise balancing the rights of religious groups against state discrimination laws.

After the Nov. 4 arguments, the chairmen of three USCCB committees pointed out that “Catholics have been called to care for children who have been orphaned, or whose parents face unique difficulties in providing care, since the earliest days of our faith.” They also said they hoped the court would “reject a hollowed-out pluralism that permits people of faith only to preach but not to practice” their beliefs.

A week later, the court took on the Affordable Care Act and during oral arguments it seemed as if the justices were inclined to leave the bulk of the law in place.

Mercy Sister Mary Haddad, president and CEO of the Catholic Health Association, urged the court to uphold the current law, saying that striking it down would be devastating to millions of Americans, including those with COVID-19. She said doing away with the health care law would “wreak havoc on the U.S. health care system and irreparably harm those most in need of care” in the middle of a pandemic.

The U.S. bishops have long emphasized that the poor and vulnerable must have access to health care, but they have objected to the legislation’s contraceptive mandate, requiring employee health insurance plans to provide contraceptive coverage.

Another November case examined President Donald Trump’s order to exclude immigrants living in the country illegally from the 2020 census for purposes of redrawing congressional districts. The U.S. bishops defended these immigrants’ right to be counted.

In a statement, Bishop Dorsonville said: “Denying the undocumented and the states in which they reside their rightful representation in Congress is counter to the Constitution and makes people feel invisible and not valued as human beings.”

“The church’s teaching is clear: Human dignity is most sacred, regardless of legal status,” he said. “For that reason, we once again affirm the need to count all persons in the census, as well as in the apportionment of congressional representatives.”

The USCCB, along with other Catholic organizations, also filed a friend-of-the-court brief in this case, arguing that excluding those without legal documentation from the apportionment base of the census sends a message that these individuals are not equal members of the human family.

In the summer and fall, the court gave the approval for a number of federal executions to take place, denying the appeals of the death-row inmates.

The court also sent some death penalty cases back to lower courts. In June, it sent a case back to the Texas Court of Criminal Appeals for further review, saying the death-row inmate had not been given sufficient legal counsel. It also granted a last-minute stay of execution for another Texas death-row inmate later that month saying the state prison officials needed to reexamine their rule that bans clergy from being with prisoners to the execution chamber.

The U.S. bishops have spoken against the federal executions which the federal government resumed this year after a 17-year hiatus and urged the Trump administration to end this practice, including in a Dec. 7 statement.

Catholic Mobilizing Network and Sister Helen Sister Helen Prejean, a Sister of St. Joseph of Medaille and longtime activist against the death penalty, have similarly called to an end to these executions and have also spoken against the Justice Department’s plan to expand how it carries out federal death sentences — to include electrocution, gas or firing squads along with lethal injections.

Sister Prejean told a reporter that a likely reason for this policy change was to “make sure that they can expedite these executions without any court cases about lethal injection.”

She noted that in many states there have been questions about the use of lethal injections as well as botched executions, which she said is the Supreme Court’s fault for having “allowed states to just experiment widely with drugs to kill people.”