Kumbo, Cameroon — Christian Cardinal Tumi who was abducted Thursday, Nov. 5, in the troubled North West region of Cameroon has been freed, a Bishop in Cameroon has told journalists Friday, Nov. 6.

“Glory be to God. Cardinal Tumi has been freed by the Separatist fighters. He is fine and in good health,” Bishop George Nkuo of Cameroon’s Kumbo Diocese told journalists shortly after the release of the Archbishop emeritus of Cameroon’s Douala Archdiocese.

The 90-year-old cardinal was kidnapped Nov. 5 evening around 6 p.m. at Baba I, a village along the Bamenda-Kumbo road (North-West region), the leadership of Douala Archdiocese confirmed in a statement shared with ACI Africa.

Twelve other people, including the traditional Chief of the Nso tribe, Fon Sehm Mbinglo II, were also reportedly kidnapped alongside the Cardinal. In Cameroon, traditional rulers of the North West region are addressed by the title Fon.

Accused of clamoring for the resumption of schools so that children can resume learning, the 13 individuals were allegedly kidnapped by a group of armed separatists under the leadership of one, “General Chaomao.”

Responding to journalists at Baba 1 where the cardinal first appeared after being freed, Bishop Nkuo said that the whereabouts of the traditional ruler of Nso and 11 others remain unknown.

“The Fon of Nso (is) still being held by his captors; we don’t know where the Fon is at the moment,” the Local Ordinary of Kumbo said and added in reference to those kidnapped Nov. 5, “They were taken in two different directions but the cardinal has been released.” 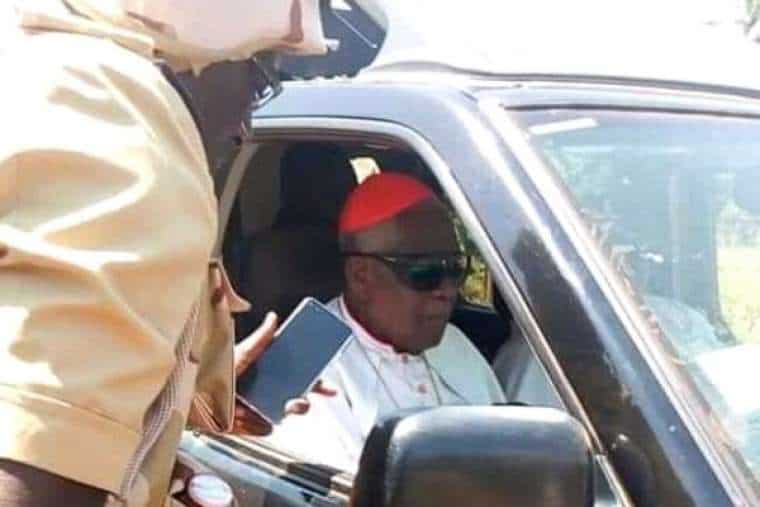 Northwest and Southwest Cameroon, the two English speaking regions of the Central African nation, have been experiencing violence since 2016 after the deployment of Francophone teachers and judges to the historically marginalized Anglophone region was resisted through protests.

The protests, which turned violent, involved lawyers and teachers in the Anglophone regions. They resisted the deployment of their Francophone counterparts arguing that the two regions operated under different legal and educational systems.

Schools in the two regions had been closed due to the skirmishes and only reopened on Oct. 5 after separatist leaders in the country demanded, in September, that the government allows students to resume learning.

However, on October 24, gunmen attacked a school within Cameroon’s Catholic Diocese of Kumba, killing at least seven children and leaving dozens injured.

Cardinal Tumi has repeatedly called on the government and the leadership of the separatist group to engage in an inclusive dialogue for a lasting solution to what has been called the Anglophone crisis.

In July 2018, Cardinal Tumi alongside other religious authorities convened the All Anglophone General Conference (AGC) in view of ending the crisis. However, the government did not grant the authorization and the meeting did not took place.

In August 2019, the Cardinal launched a nationwide crusade advocating for peace in the troubled regions of Cameroon.

“The popular initiative for peace that we want to put in place will not be a rosary, incantations, a profession of faith or an avenue for strong declarations. The crisis can no longer be healed by simple words or condemnation, but with concrete actions on the field,” Cardinal Tumi said in August 2019.

With several resolutions adopted during the National Dialogue that was presided over by Cameroon’s Prime Minister Joseph Dion Ngute in October 2019, Cardinal Tumi alongside Archbishop Andrew Nkea of Bamenda Archdiocese led separate campaigns to sensitize the population about the resolutions.

“We think that the launching of the peace drive was successful. We are not saying that it was perfect, but it was a good beginning and everyone is waiting for more to be done,” Cardinal Tumi said after presenting the report of their mission to the Prime Minister in the country’s capital, Yaounde in December 2019.

Cardinal Tumi who led the delegation to the North West region explained, “We were sent out to propose to the population and to those who will explain to the populations of the various divisions the importance of peace for anything to be done at all. Without peace nothing can be done.”

Making reference to the lack of disclosure on the content of the controversial National Dialogue that came up during his mission, the Cameroonian Cardinal observed, “We expect the content to be made known to the people as soon as possible – what will make the difference between the North West and South West and other regions of Cameroon because there are colonial and cultural differences we inherited.”

The National Dialogue was held from Sept. 30 to Oct. 4, 2019 at the Yaoundé Conference Centre with the objective of finding lasting solutions to the protracted Anglophone crisis.

Among the recommendations made by the eight commissions that debated during the National Dialogue was the granting of a special status to the North-West and South-West regions. The proposal originated from the decentralization commission.