Pope Francis has expressed solidarity with the families of seven schoolchildren who were “barbarically killed” as a result of the October 24 attack on their school located within Cameroon’s Kumba Diocese.

“I participate in the suffering of the families of the young students barbarically killed last Saturday in Kumba, in Cameroon,” the Holy Father said Wednesday, October 28, at the end of his weekly General Audience.

He added, “I feel great bewilderment at such a cruel and senseless act, which tore the young innocents from life while they were attending lessons at school.”

Gunmen attacked Mother Francisca International Bilingual Academy on October 24 and opened fire on students in a classroom. According to a media report, six children died on the spot while the seventh succumbed to the gunshot injuries on October 25.

In his remarks, which he also published on Twitter, the Holy Father prayed to God to enlighten hearts “so that similar gestures may never be repeated again and so that the tormented regions of the Northwest and Southwest of the country may finally find peace!”

Northwest and Southwest Cameroon, the two English-speaking regions of the Central African nation have been experiencing violence since 2016 after the deployment of Francophone teachers and judges to the historically marginalized Anglophone region was resisted through protests.

The protests, which turned violent, involved lawyers and teachers in the Anglophone regions. They resisted the deployment of their Francophone counterparts arguing that the two regions operated under different legal and educational systems.

Schools in the two regions had been closed due to the skirmishes and only reopened on October 5 after separatist leaders in the country had demanded so from the government in September.

In his October 28 address at the Vatican’s Paul VI Hall, Pope Francis expressed the hope that the “weapons will remain silent and that the safety of all and the right of every young person to education and the future can be guaranteed.”

“I express my affection to families, to the city of Kumba and to the whole of Cameroon and I invoke the comfort that only God can give,” the Holy Father said in conclusion.

Pope Francis is the latest Catholic leader to speak to the October 24 murder of the children and injury of others.

In a letter dated October 24, the day of the attack, the Local Ordinary of Kumba Diocese, Bishop Agapitus Nfon expressed his condemnation of the attack and wondered, “Who then could have done such a gruesome act? We are mourning and pondering in our painful hearts, is enough not enough?”

The 56-year-old Cameroonian prelate also announced that there would be a eucharistic celebration on October 30 during which prayers will be offered “for the repose of the souls of our dear and innocent students who were murdered.”

The Holy Mass will also be offered to seek “God’s consolation on their parents and families and guardians, and for all our traumatized pupils and students,” Bishop Nfon said in his statement shared with ACI Africa.

“We shall also pray for the forgiveness and conversion of the Herod(s), the perpetrators of this heinous and barbarous act, while asking our Loving Father in Heaven to intervene for a lasting solution to be found so that true justice and peace may reign,” the bishop added in his October 24 statement. 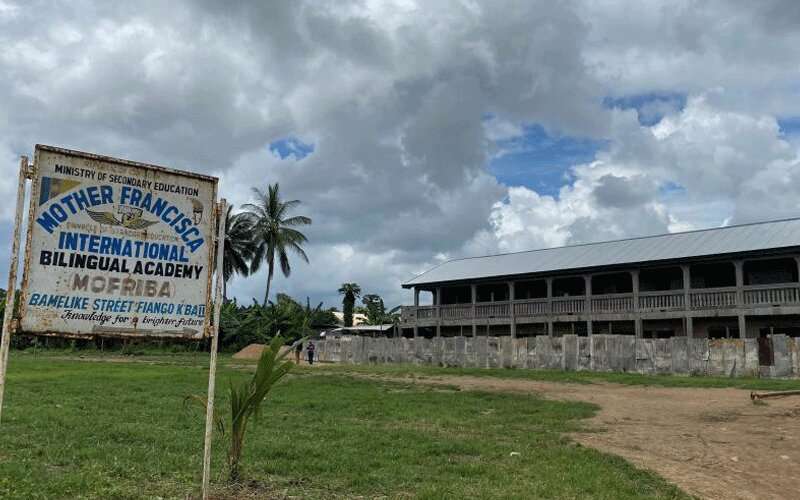 Others who have condemned the attack include members of the Society of Jesus (Jesuits) in Africa who have termed the October 24 “killing and wounding of innocent children … a heinous and despicable act.”

“We are shocked and outraged by the killing of innocent schoolchildren. We extend our deepest condolences to the families of the children and offer our prayers and moral support to the wounded and their families and to the entire community of Kumba,” the Jesuits in Africa say in their Wednesday, October 28 statement, shared with ACI Africa.

In the statement signed by the President of the Jesuit Conference of Africa and Madagascar (JCAM), Father Agbonkhianmeghe Orobator, the Jesuits in Africa also call on Cameroonian authorities to act fast in order to end the violence that bedevils the country.

“We demand that this violence stops now and that children should be allowed to live in safety without any fear of violence. We further demand that the perpetrators of the attack be brought to justice,” the Jesuits say in their October 28 statement.

The leadership of the All Africa Conference of Churches (AACC) has also expressed sadness at the killing of the children and called for respect for human life and an end to the violence in Cameroon.

“The All Africa Conference of Churches (AACC) has learnt with great sadness of the horrific massacre of schoolchildren by yet to be identified gunmen while in a classroom in Mother Francisca International Bilingual Academy in Kumba,” AACC General Secretary, Rev. Dr. Fidon Mwombeki has said on behalf of church leaders in Africa in the October 26 statement obtained by ACI Africa.

Rev. Mwombeki has added, “We are all children of one God, and all life is sacrosanct. Nobody should take away a life that he or she did not give.”

He has called on warring groups in Cameroon to give an unequivocal pledge that there will be no targeting of civilians by their combatants and appealed to the leadership of the Central African nation to investigate the heinous act, to apprehend the perpetrators, and prosecute them accordingly.