The Vatican’s leading diplomat has warned that Venezuelan migrants and refugees are facing a “humanitarian disaster” as lockdowns in host nations leave them without jobs and force some to return home in grueling conditions.

In an online conference on Venezuelan migration organized May 26 by Spain’s government, Archbishop Paul Gallagher, the Vatican’s foreign minister, urged donors to “act immediately” to fund programs that help vulnerable migrants and refugees from the South American country.

“COVID-19 continues to exacerbate the current crisis,” Archbishop Gallagher said. “Already underfunded organizations and programs are in critical need of increased support to upgrade shelters and services” so that they meet COVID-19 requirements.

According to the United Nations, there are currently more than 5 million Venezuelan migrants and refugees around the world, with about 3 million living in Colombia, Ecuador and Peru.

Food shortages, violence and poverty were forcing thousands of people to leave Venezuela each day earlier this year. But that stopped when coronavirus cases began to rise in South America in late March, prompting most countries on the continent to shut down their borders and impose stay-at-home measures.

Now, two months into the health crisis, some Venezuelan migrants are heading back home after losing their jobs, with the poorest walking for weeks as they try to reach their country. 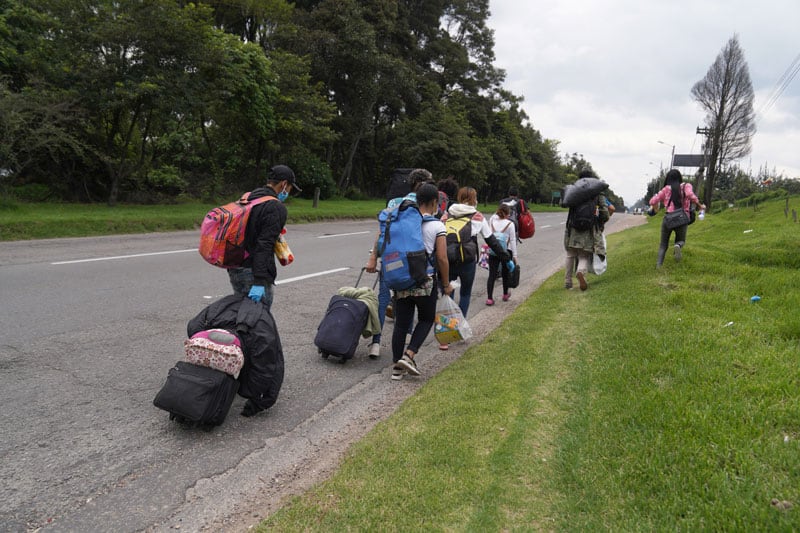 Venezuelan migrants walk along a highway leading out of Bogota, Colombia, en route to their homeland in early April, during the COVID-19 pandemic. (CNS photo/Manuel Rueda)

“My landlord threatened to evict me and I had no money to pay rent,” said Christian Garcia, a migrant who headed back home in April after losing his job at a construction site in Bogota.

Garcia was making a 400-mile trek toward the border, with his belongings stuffed into a large backpack.

“It will be tough in Venezuela,” he acknowledged. “But at least we will not have to pay rent.”

During the May 26 conference, the European Union and a coalition of member states pledged $650 million in grants for programs aimed at assisting Venezuelan refugees.

However, it is not clear yet how much of it will go toward providing relief during the pandemic.

“Some of these funds will be spread out over time,” said Daphne Panayotatos, a program officer at the Washington-based advocacy group Refugees International. “We’re still far from where we need to be” when it comes to funding, she said. 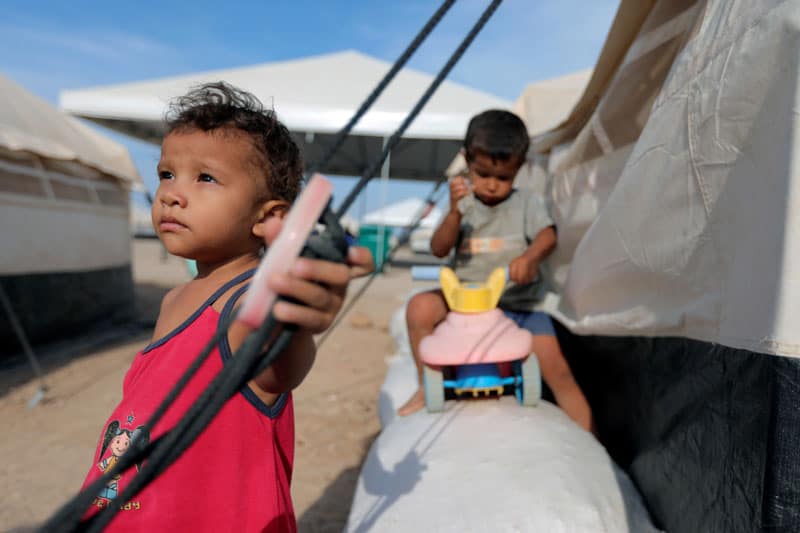 Venezuelan migrant children are seen in early May next to a tent at a camp in Maicao, Colombia, during the COVID-19 pandemic. (CNS photo/Luisa Gonzalez, Reuters)

Earlier this year, the U.N. Refugee Agency called on donors to fund a $1.4 billion plan to help Venezuelan migrants and refugees around the hemisphere this year. On May 27, the organization’s regional response website said only 12 percent of that amount has been funded so far.

Panayotatos said the needs faced by Venezuelan refugees have been changing due to the COVID-19 crisis, with more resources now required for urgent things like food and shelter, as thousands of migrants struggle to keep up with rent payments.

Catholic groups helping migrants on the ground have also said the pandemic has changed their operations.

In Cucuta, on Colombia’s border with Venezuela, a shelter for migrants is holding just half of its capacity to avoid crowding, while a food pantry that served more than 3,500 migrants each day and was getting support from the U.S. bishops’ conference has been shut down to comply with the Colombian government’s measures against large crowds. A church-run day care center for migrants’ children also has closed.

Father Israel Bravo from the Diocese of Cucuta said parishes have attempted to support migrants by distributing food rations that migrants can cook at home.

The poorest migrants are pooling their resources together and organizing communal meals that are cooked at improvised campfires.

“We would like to open our pantry soon,” Father Bravo said. “But we must comply with government regulations.”

Featured Image: Venezuelan migrants carrying their belongings make a 400-mile trek out of Bogota, Colombia, toward the Venezuelan border in early April, during the COVID-19 pandemic. The migrants had no money for bus fare. (CNS photo/Manuel Rueda)