A Maryknoll sister says years of organizing around HIV helped with coronavirus response.

EUGENE, Ore. (CNS) — When COVID-19 struck communities around the world earlier this year, religious leaders who had responded to the HIV pandemic for decades were uniquely situated to confront the challenges the new virus presented, said international health officials who participated in a three-day virtual conference on the interfaith response to HIV and AIDS.

“The World Health Organization recognizes that religious leaders and faith-based organizations and faith communities have a very significant and unique role to play during the COVID-19 response, not just by supporting local health systems, by delivering health care, and by adapting their faith practices to reduce infections, but faith leaders are also a trusted source of accurate and trusted information that allows people to make decisions to protect their health,” Sarah Hess, a technical officer with the WHO Information Network for Epidemics, told the conference Sept. 22.

Sponsored by several religious groups and supported by the United Nations and U.S. President’s Emergency Plan for AIDS Relief, the online conference brought together more than a thousand people, including several Catholic leaders.

Cardinal Michael Czerny, undersecretary of the Migrants and Refugees Section of the Vatican’s Dicastery for Promoting Integral Human Development, told the conference Sept. 24 that the world had made great progress in responding to HIV.

“We now see people resiliently living with HIV and renewing their own lives, as well as their family and community relationships. We witness their active participation and creative genius in shaping the world of the present and of the future,” he said. “There is much more access to early diagnosis and treatment, wider distribution of antiretroviral pharmaceuticals, lower prices, and growing voluntary sharing of intellectual property among researchers and generic manufacturers.”

Yet citing U.N. figures from July, Cardinal Czerny reminded participants that 12.6 million of the 38 million people living with HIV are not receiving treatment. Of particular concern, he said, were children living with the virus. According to the Joint U.N. Programme on HIV and AIDS (UNAIDS), only 53 percent of infected children are receiving treatment, compared with 68 percent of infected adults.

For years, Pope Francis and Vatican officials have been pushing pharmaceutical companies and medical device manufacturers to step up their response to pediatric HIV infections. Cardinal Czerny said they were making steady progress, yet he warned it was not enough.

“More focused attention to pediatric HIV is needed in the wider public health community, especially since children cannot advocate and monitor for themselves,” he said.

The cardinal said negative attitudes toward poor and marginalized populations stubbornly persist in religious responses to disease, and he said a “culture of solidarity,” as proposed by Pope Francis, was an antidote to the “stigma and discrimination in which many participate—consciously or unconsciously—toward those who do not fall within one’s ‘comfort zone’ of whatever category.”

Cardinal Czerny, who as a priest was a founder of the African Jesuit AIDS Network, noted that while the church supports a rights-based approach to health care, COVID-19 has made it necessary to talk about responsibilities as well.

“Faith nourishes the realization that every right comes with a concomitant responsibility to care for my family, my community, my brothers and sisters and myself in the worldwide human family—both now and future generations need to be included—and to care for this earth, our common home. When our rights are not understood and exercised in a responsible manner, we jeopardize the health of all God’s creation. The COVID pandemic has demonstrated this fact all too dramatically everywhere,” he said. 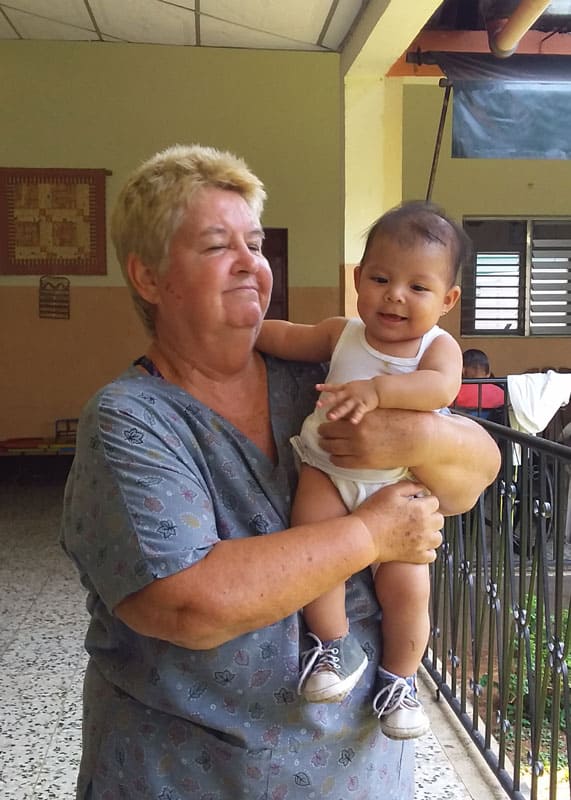 Maryknoll Sister Delia Smith holds Sophie, the child of one of the hospice residents whom the Maryknoll sister is trying to keep free from COVID-19. She was one of the presenters at a virtual HIV Interfaith Conference Sept. 22, 2020. (Courtesy of Delia Smith/Guatemala)

A Maryknoll sister who ministers to sex workers in Guatemala told the conference that years of organizing around HIV had helped produce a more agile response to the challenges of COVID-19.

“We have a group of women living with HIV. We’ve trained and empowered them as community advocates. They are mobilizing their communities in all sorts of ways at the moment. It’s wonderful that these women who felt discriminated against for so long are now the ones taking the lead in their communities,” said Sister Delia Marie (Dee) Smith.

Sister Smith, who spoke Sept. 22 during one of several panel discussions about best practices in faith-based HIV response, said the church gets in the way of its own ministry at times.

“Here in Guatemala, the response to HIV by religious leaders has been slow and sporadic. Most of the work has been done by women religious and other faith-based organizations. Because of the hierarchical nature of the church, grassroots work has always needed the approval of a priest or bishop, so we’ve had to slowly introduce the idea of sex education and HIV prevention into the parishes and church movements. Once the priest is on board, however, we can move ahead and we can move mountains. We’ve had to work at transforming the mindset of the decision makers, emphasizing that some topics, although questionable to the hierarchy, need to be tackled as soon as possible, like condom use, sexual orientation, and diversity. For too long they’ve been seen as taboo subjects,” she said.

“There hasn’t been a more critical time for faith-based institutions to step up to the plate and be exemplars of compassion and care for those people on the margins,” said Sandra Thurman, chief strategy officer in the State Department’s Office of the U.S. Global AIDS Coordinator and Health Diplomacy.

“All over the world, lots of people are in despair and difficulty that’s unprecedented in our lifetime. There isn’t any institution or group of people that have more experience or better position to provide the kind of pastoral support and be exemplars of what it means to really care for each other than our colleagues in the faith-based community,” Thurman told the conference Sept. 24.

Yet one top U.N. official said she wanted even more from the religious leaders.

Winnie Byanyima, executive director of UNAIDS, said the same people at the margins of society—gay men, sex workers, migrants, prisoners, victims of gender-based violence and others—who suffered discrimination because of HIV are suffering inordinately today because of COVID-19.

“I urge you religious leaders. You know more than anybody else. Your religions cut across countries and regions. Use your moral voice and join a coalition that is growing, demanding a people’s vaccine. That any vaccine that’s produced is a global public good,” she said Sept. 22.

Byanyima said the U.N. was proposing mechanisms to ensure that a coronavirus vaccine would be produced and made available throughout the world, and that the first to be vaccinated would be health workers, the elderly, those with chronic diseases and other vulnerable people, what she said amounted to roughly 20 percent of the population.

“It doesn’t make sense, and it is unjust, that people in rich countries, just 13 percent of the global population, would all get vaccinated while health workers and sick people in other countries wait in the queue for another four or five years,” Byanyima said.

“Use your moral voice,” she told conference participants, “to demand that any vaccine that’s produced against COVID is shared as a global public good.”

Featured image: A grandmother prepares her granddaughter for school in 2011 at a village in Chikwawa, Malawi. Only 53 percent of children infected with HIV are receiving treatment, said Canadian Cardinal Michael Czerny, undersecretary of the Migrants and Refugees Section of the Vatican’s Dicastery for Promoting Integral Human Development. The cardinal spoke to virtual conference on the interfaith response to HIV and AIDS. (CNS photo/Paul Jeffrey)