Maryknoll sister advocates for victims of Japan’s triple disaster caused by an earthquake, a tsunami and a nuclear accident.

After Japan lifted its state of emergency, due to the coronavirus, on May 31, Maryknoll Sister Kathleen Reiley expressed relief that COVID-19 was settling down in the country. But, she said, “The problem with the nuclear accident and what to do with nuclear waste will be around for hundreds of years.”

Sister Reiley, who has served as a missioner in Japan since 1968, was referring to the accident at Fukushima-Daichi Nuclear plant, which occurred on March 11, 2011. The accident was triggered by a devastating tsunami that followed a powerful 9.0 earthquake that hit a large part of Japan’s northern coast.

The quake and tsunami left more than 18,000 people dead or missing and hundreds of thousands of houses and businesses destroyed, according to Japan’s National Police Agency. More than 160,000 people fled the region near the nuclear plant because of the meltdown and more than 40,000 are still unable to return home due to radiation contamination.

Last June, Sister Reiley took the 3.5-hour train ride from Tokyo, where she lives, to Fukushima to give this Maryknoll reporter a tour around Haramachi, a town near where the Fukushima-Daichi nuclear accident happened. 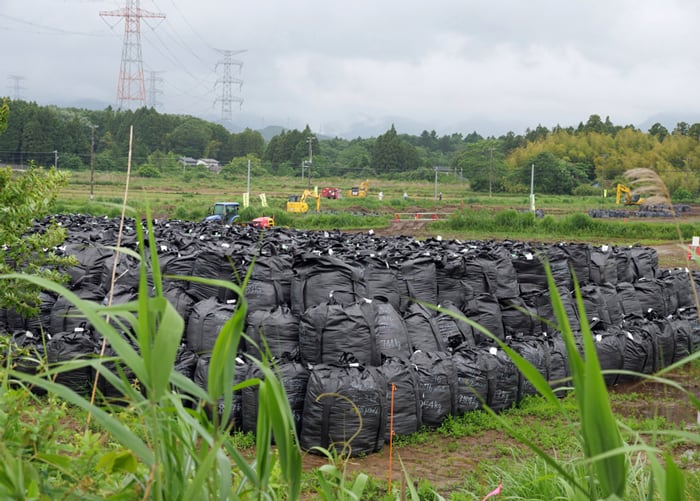 Hundreds of vinyl bags with contaminated dirt seen around Fukushima are tragic reminders of the nuclear accident that occurred there on March 11, 2011. (Sean Sprague/Japan)

The area had the feeling of a sci-fi apocalyptic movie: A ghost town with abandoned farmlands that could not be used; streets blocked with fences and no-trespassing signs; decaying houses damaged by the earthquake that cannot be repaired because they are contaminated; Geiger counter boxes under the street signs to measure the level of radioactivity; thousands of huge black vinyl bags filled with radioactive dirt; security guards wearing masks and radioactive protective gear at checkpoints, only allowing entrance to radioactive waste cleaning crews—many of them immigrants who are temporarily hired to do a job that could harm their health.

We also visited the Nuclear Disaster Information Center, a high-tech museum built by Tokyo Electric Power Co. (TEPCO), owner and operator of the Fukushima-Daichi nuclear plant. The admission-free, two-story, 1,900 square-meter exhibition space, was opened in November 2018 to inform visitors of how the nuclear disaster began and the progress made on the safety of nuclear energy. But the museum offered a stark contrast to the ghost town that surrounds it.

Mrs. Tanaka (not her real name to protect her identity) is one of the 10 percent of residents who have come back to live in the area and is still trying to rebuild her life. March 11, 2011, is seared in her memory. She recalls putting her children into her car and fleeing toward the mountains, watching in horror in her rear-view mirror the approaching wave of destruction as the tsunami swept over her town. Although she is not a Catholic, she regularly meets with other survivors at a Catholic kindergarten and community center built to help families that have returned to the area.

Auxiliary Bishop James Kazuo Koda was sent from Tokyo to live with the people. In this town with very few Catholics, the Church and the Catholic relief agency Caritas have built a base for volunteers. “There are many deep encounters among the people and the volunteers, whether they are Catholic or not,” says Bishop Koda through Sister Reiley, who served as an interpreter. “It’s a place to witness God’s love to all people.” 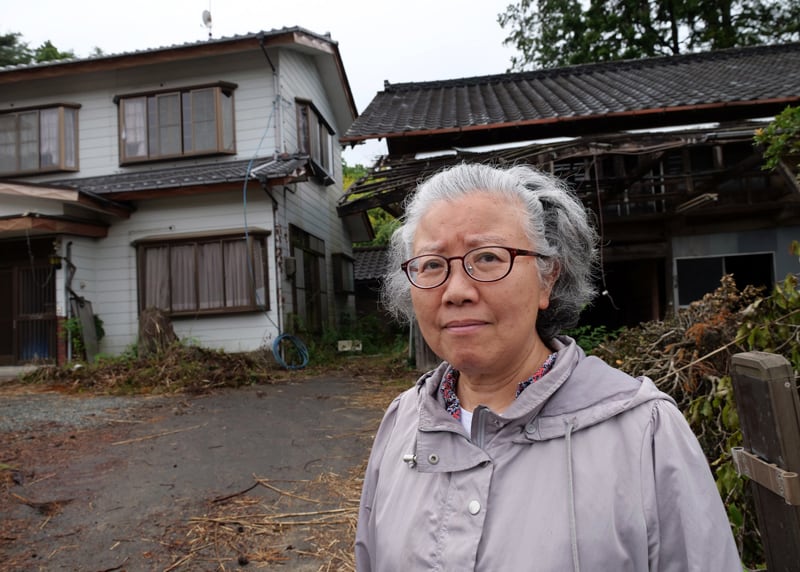 Sister Chiaki, a Religious of the Sacred Heart who lives near Fukushima, stands in front of a house that can’t be rebuilt because of radiation from the 2011 nuclear meltdown.

Sister Reiley has striven to show God’s love for the people by speaking out against nuclear energy in a country whose 52 nuclear plants, she believes, pose an enormous threat to human life.

After the triple disaster in 2011, Sister Reiley responded to the Japanese Catholic Church’s call for volunteers. “Initially I went several times a year to several different Japan Caritas bases wherever the need was at the time,” says Sister Reiley. “But gradually towns far away from the reactor returned to normal, (except) Haramachi where the need is still great for the elderly, differently abled and those people in a low economic bracket. They don’t have the means to move away from the reactor area.” 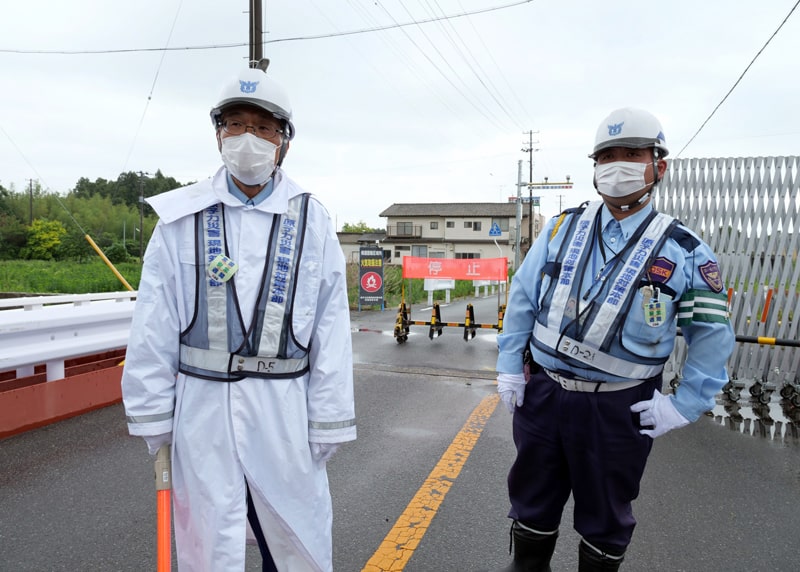 Two security officers at one of several checkpoints in the area near Fukushima. (Sean Sprague/Japan)

Due to COVID-19 restrictions, Sister Reiley has not been able to return to Haramachi, or to the children’s ward at the cancer hospital where she volunteers as a counselor, because volunteers are considered non-essential workers. But her commitment to speaking out against nuclear energy continues.

Her concern about nuclear energy began in 1979 in her native Schuylkill County, Pa. She was visiting home from her mission in Japan when there was a reactor meltdown at the Three Mile Island nuclear plant in nearby Dauphin County. It is considered the most serious nuclear accident in U.S. history, according to the U.S. Nuclear Regulatory Commission.

Out of the 24 beds for children with cancer at the hospital, at the time, seven children were from Ibaraki, explains the missioner. “But nobody can document that and say absolutely, ‘that’s why [the nuclear accident] they got cancer’.”

Still the missioner works tirelessly to raise awareness about the dangers in nuclear energy. Nearly 25 years after the 1986 nuclear accident in Chernobyl, in the former Soviet Union, Sister Reiley read an article, in a Japanese newspaper, about the high incidences of cancer linked to the nuclear accident. The report cited a study conducted by an international team of researchers led by the National Cancer Institute. That gave the Maryknoll sister an opportunity to question what happened at the nuclear facility in Japan. She visited the newspaper headquarters to speak to the editors.

“Won’t you please do some research about Tokaimura? About the accident that happened in Ibaraki?” she asked. The paper did not respond to her request. She was undaunted.

That somber day in June in Haramachi, as we drove back to the train station, we saw a farm with cattle and stopped for a lesson from Sister Reiley. She explained that the government had asked the owner to kill the cattle. The cows’ milk could not be sold nor could the cows be slaughtered to sell their meat because they were contaminated. The cows, she continued, were innocent victims of problems caused by human beings.

“But this wonderful man asked the government to let the cows live a natural life and die a natural death,” says Sister Reiley.

Then she translated a sign at the cattle ranch. “We lived here with no fear of nuclear energy and now we realize that we lost something that can never be returned to us and we want people to understand that we have to say sayonara, goodbye, to nuclear energy.”