A Man on a Cross
By David Aquije
May 1, 2020
Featured Stories | May June 2020
ShareTweet it!LinkedinEmailPrint

Every time she visits the children’s ward at the National Cancer Center Hospital in Tokyo, Japan, Maryknoll Sister Kathleen Reiley comes away renewed.

“These children are my teachers,” says the missioner, with the same passion and love she felt when she started her ministry of visiting sick children more than three decades ago. “And I tell them, ‘You know, I never know what’s going to happen to me or when it will happen, but I hope I can be like you, because you accept what is happening to you.’ ”

Sister Reiley shares the example of Mari, an 18-year-old girl, who had cancer since she was 3 years old. She asked the missioner to give other children with cancer a message: “Tell them it’s important to find some little thing they enjoy, every day.”

“Mari was phenomenal. [She was one of] three teenagers and they all had cancer quite seriously,” says Sister Reiley. “She could sing and two of them could play the guitar, the electric guitar.”

Mari and her two friends were rehearsing to give a concert in a park near the hospital to raise awareness of the needs of children with cancer when one of them died, says Sister Reiley. The doctors suggested that the other two cancel the concert. “No way! We would sing our hearts out for Kenta,” the teenagers responded.

Before entering the Maryknoll Sisters Congregation in 1963, Sister Reiley studied nursing in Washington, D.C. Assigned to Japan in 1968, she earned a bachelor’s degree in Far Eastern Studies from Sophia University in Tokyo. She also holds a master’s degree in theology from Maryknoll School of Theology and has studied clinical pastoral education at Penn State University’s hospital in Hershey, Pa.

A strong advocate of research to combat cancer, Sister Reiley is equally creative in her efforts to bring happiness to the children’s ward. She introduced Halloween to the hospital.

“I was at the Hershey medical center and saw how much the children enjoyed it, so when I went to the cancer hospital (in Japan), I said, ‘How about we have Halloween?’” says Sister Reiley, explaining that Halloween is not celebrated in Japan. “It’s caught on; now the children, staff, school teachers, parents, we all do some kind of costume and for an hour we are all equal. One time a doctor crawled in as a baby with a bottle, and a boy became a nurse. Sometimes, I’ve been a swimmer and a clown. Laughter is the best medicine.”

Sister Reiley’s laughter, smile and gentle manner are evident even when she explains her own health issues. For over 10 years, she says, she has suffered from Meniere’s disease, a condition that can lead to vertigo and hearing loss. About three years ago, doctors found a lymphoma in her small intestine. “So far, it’s just being quiet, so I hope it stays quiet. They’re lazy cells, so they keep an eye on it, but I don’t have to take any medicine, just live my life as best as I can,” she says. 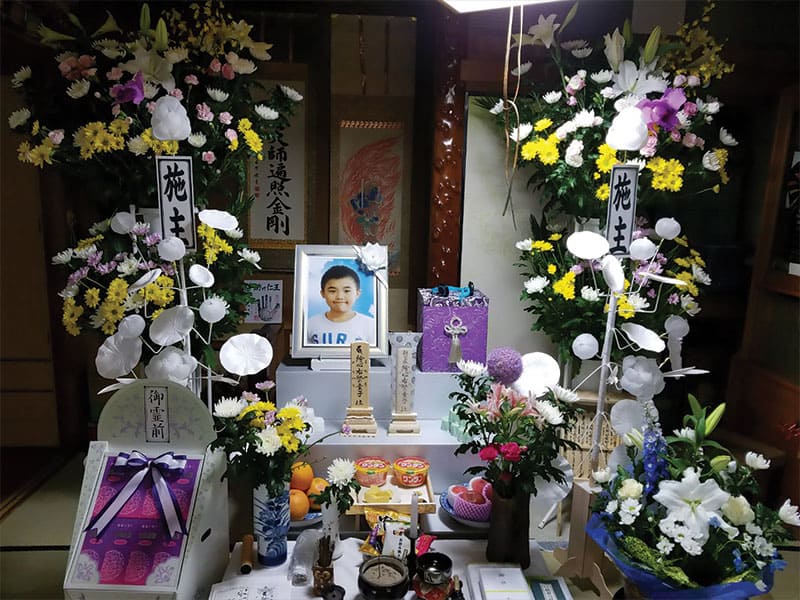 Memorial for Yuki, a 13-year-old who died of cancer. (Courtesy of Kathleen Reiley/Japan)

And with the same calmness that she talks about her own cancer, she tells the story of Yuki, a 13-year-old boy with cancer to whom she taught a breathing exercise.

“I held his hand gently and I said, ‘You just breathe in and breathe out, and you become one with your breathing and don’t think about anything. If you’re worried or you’re anxious about something, just give it over to your breath and we’ll just do that for 30 seconds or a minute, OK?’ ” says Sister Reiley, explaining that at the Japanese government hospital, in a country with a minority of Christians, she cannot talk about religion unless she is asked.

“And Yuki, who’s not Christian, said to me: ‘This is a very mysterious power. Is this God or Mary or Jesus?’ And then he said to his mother, ‘I’m not afraid to die.’ ”

Sometime later, Yuki died. When Sister Reiley talked to his mother, the mother told her that one day the children were doing an art project in the children’s ward and were asked to draw anything they wanted.

“They didn’t have any special model or anything,” says Sister Reiley. “This is what he drew.” She shows Yuki’s drawing: a man on a cross.

Featured image: Drawing by Yuki, a young cancer patient who was not a Christian. (Courtesy of Kathleen Reiley/Japan)