The president meets with Bishop Seitz of El Paso, chairman of the U.S. Conference of Catholic Bishops’ Committee on Migration.

The prayer of a migrant girl in Ciudad Juárez, Mexico, neatly written on the back of a card with the image of the Sacred Heart, was one of the mementos President Joe Biden acquired from his time at the U.S.-Mexico border. Bishop Mark J. Seitz of El Paso, Texas, handed the president this prayer card toward the end of his visit to El Paso.

“She wrote a little prayer on the back in Spanish, which I translated for the president,” Bishop Seitz said at a Jan. 8 news briefing organized by U.S. Rep. Veronica Escobar, a Democrat whose congressional district includes all of El Paso and most of its suburbs.

The president met with the bishop of this border city, who is the new chairman of the U.S. Conference of Catholic Bishops’ Committee on Migration, as well as other local officials and community leaders earlier that day.

In this first trip to the border since he took office, Biden, who is Catholic, sought to “assess border enforcement operations” and talk to those helping to manage “the historic number of migrants fleeing political oppression and gang violence in Venezuela, Haiti, Nicaragua and Cuba,” according to the White House.

Biden’s visit — which lasted a few hours — came amid criticism over how he is handling the humanitarian crisis at the southern border.

Upon his arrival the afternoon of Jan. 8, Biden greeted local officials, Bishop Seitz and Texas Gov. Greg Abbott, who like Biden is also Catholic. Abbott presented Biden with a letter condemning the president’s approach to immigration.

The president then went to the Bridge of the Americas — which connects El Paso and Ciudad Juarez, Mexico — where he observed border officers demonstrate how they search vehicles for drugs and other contraband.

Next, he made an unscheduled stop to walk along a metal border fence that separates the U.S. city from Ciudad Juárez and to speak with Border Patrol agents. At that time, Biden was asked by journalists what he had learned at the border. “They need a lot of resources, and we’re going to get it for them,” he answered.

His last stop was the El Paso County Migrant Services Center, where workers greet people released from Border Patrol and help them find transportation and other needed services.

He greeted local elected officials, activists and community leaders there, including Bishop Seitz, Ruben Garcia of Annunciation House, and Sister Norma Pimentel of the Missionaries of Jesus, who heads Catholic Charities of the Rio Grande Valley in the Diocese of Brownsville, Texas.

Sister Pimentel said the president’s presence at the border was significant. The sister stressed the need to come together as a community — including the city government, Border Patrol and faith-based communities — to safeguard people’s dignity while creating policies to face the issue of migration. 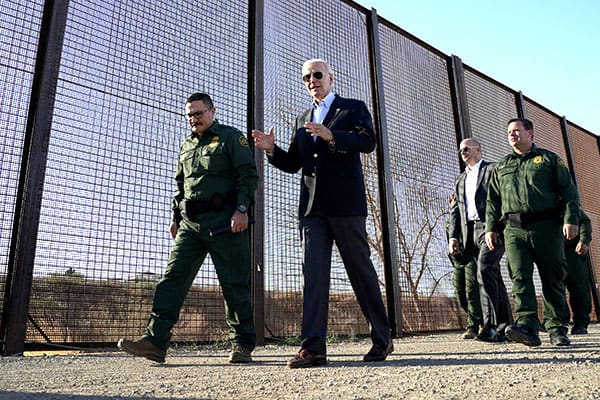 “One of the things that we as church, especially people of faith, want to make sure not to ever lose sight of is the fact that they’re people, they’re human beings, they’re families, they’re children, and we cannot lose sight of that,” she said at the news briefing. “I hope this is the beginning of further actions.”

This trip took place amid the newly announced expansion of Title 42, a federal public health rule enforced by the Trump administration during the COVID-19 pandemic that permits immigration officials to block migrants at the border seeking asylum from entry. Set to end last December, the U.S. Supreme Court in an emergency order Dec. 27 decided to keep Title 42 in effect indefinitely. The court will render a final ruling later this year; it will hear oral arguments on the matter in February.

Under an expansion of Title 42 under Biden, the rule bars migrants from Cuba, Haiti, Nicaragua, and Venezuela from entering the U.S. while providing some legal paths for them to seek entry to this country. These requirements include applying for entry or “parole” in their own country, arriving by air at their own expense with a valid passport, and having a sponsor to support them in the U.S. economically.

“What we’re trying to do is broadly incentivize a safe and orderly way, and cut out the smuggling organizations,” Homeland Security Secretary Alejandro Mayorkas said during the flight to El Paso, according to a pool report.

However, migration advocates, including U.S. bishops, have argued that many people fleeing violence and persecution would not qualify for the program. At the Jan. 8 news conference, Bishop Seitz said he worries about those already on their way to the U.S.

“They’ve sold everything they own just to be able to make the trip and made this perilous 3,000-mile journey,” Bishop Seitz said. “They finally arrive in Ciudad Juárez, for instance, and then what? Where do they go?”

The bishop said that he and other advocates for migrants shared their concerns with the president and his aides.

During his nearly four-hour visit to El Paso, Biden did not meet with migrants or deliver public remarks. After the short visit, Biden traveled to Mexico City, where he and the presidents of Mexico and Canada gathered for a Jan. 9-10 North American leaders’ summit.

Featured image: Yalimar Chirinos, a 19-year-old migrant from Venezuela, displays a sign near the U.S.-Mexico border in Ciudad Juarez, Mexico, Jan. 7, 2023. The sign reads “Hello friends, we are from Venezuela, support us with what comes out from your heart.” (OSV News photo/Jose Luis Gonzalez, Reuters)

OSV News is a national and international wire service reporting on Catholic issues and issues that affect Catholics. It is a part of OSV Publishing, a division of OSV, the largest English-language Catholic publishing company in the United States. OSV, based in Huntington, Indiana, was founded in 1912.