A Maryknoll priest reconnects East Africans to a tradition of silence.

T he words silent night bring to mind thoughts of quiet, peace and reflection on the eve of Jesus’ birth, as evoked by the Christmas hymn of that name. But for Maryknoll Father James Eble, the quest for such tranquility is a year-round mission he shares with the people he serves in Tanzania.

The idea of finding peace and quiet — getting away from the din of overcrowded urban life — is a recurrent theme in the missioner’s nearly 30 years in the developing East African nation. That search led Father Eble in 2014 to found the Lake House of Prayer, a retreat center on the shore of Lake Victoria in Mwanza, Tanzania’s second-largest city. There, he and Maryknoll Lay Missioner Judy Walter, who are both trained in Ignatian tradition, serve as spiritual directors.

“The basic vision of the House of Prayer is to share the contemplative life of the Church with everyone, but with our special preference for the poor,” Father Eble says. In the chaotic times in which we live, he adds, the need for quiet and prayer are in some ways as important as a person’s physical needs. “If we’re really going to be sharing the Good News of the Gospel, along with the corporal needs such as hospitals and schools, there’s an interior journey that every religion talks about, to be free within yourself.” 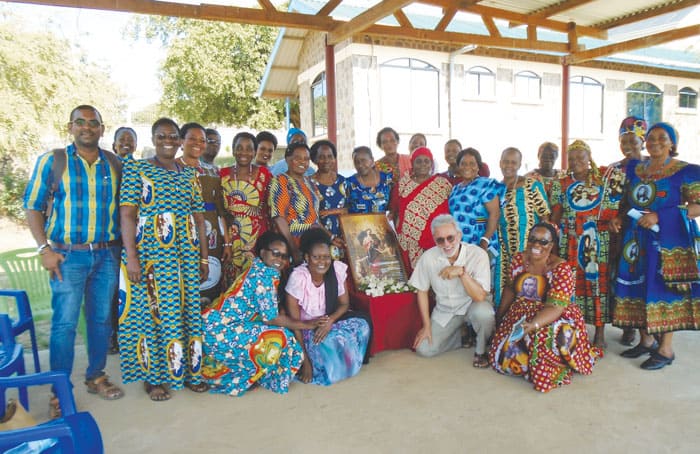 Maryknoll Father James Eble directs a retreat for the local praying community on devotion to Our Lady, Untier of Knots, teaching forgiveness and letting go of “knots” of resentment. The Lake House of Prayer, on the shores of beautiful and peaceful Lake Victoria, offers directed retreats for groups and individuals. (Courtesy of James Eble/Tanzania)

The idea for the retreat house was born in the 12 years the priest from Fairfield, California, served as pastor of Transfiguration parish in Mabatini, a poor urban section in the southeast of the sprawling city of Mwanza. There, he says, the noise was nonstop.

“You can go days at a time and it’s 24 hours noisy,” he says. “That affects you; it affects your health and your wellbeing.”

To that end, the Lake House of Prayer has no television and guests are asked to refrain from playing radios and to turn off their cell phones.

“We really focus on silence,” Father Eble says. “We use different contemplative kinds of prayer, meditation in particular, centering prayer, Christian meditation, to help people go into their inner life.”

That emphasis on silence sets the House of Prayer apart from many other retreat centers, which often can be as busy as everyday life, he says. Activities at the House are contemplative and purposely limit noise, even liturgical celebrations with loud music. “There are plenty of places you can do that but here we don’t,” he says.

Most of the guests who come are Catholic, and the prayer structure follows Catholic tradition, including daily Mass and the Church’s liturgical calendar. Yet, the House of Prayer is open to anyone, particularly from the local community, who is seeking “meditation and contemplation and rest,” Father Eble says. Guests have included Protestants and even a Muslim.

“Judy and I call it a praying community because the Lake House of Prayer is making the contemplative tradition of the Church available to the poor,” Father Eble, 70, says. 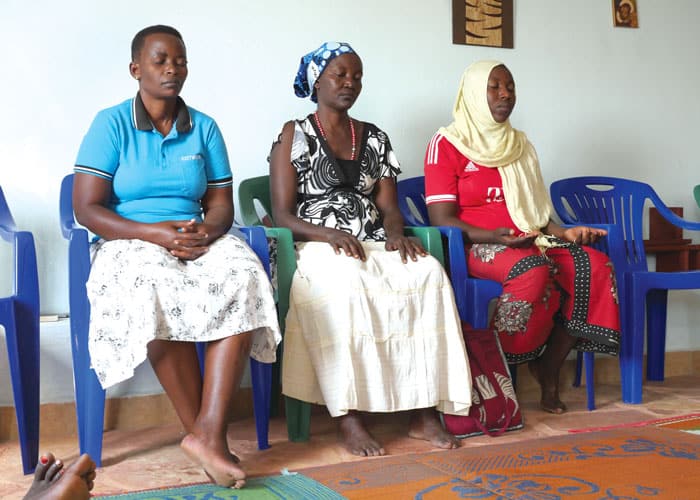 Neighbors come to the House of Prayer to take part in a praying community that makes silence, peace and contemplation available to local residents. (Sean Sprague/Tanzania)

“One of the groups who come daily here are our neighbors,” says Walter. “They are in the business of trading or fishing because we’re so close to Lake Victoria. … Very hardworking people, very poor, but they make time for God.”

Father Eble adds, “They’re invited, they come in, and we teach them this contemplative way of silence. And we get a lot of people who have benefited from that.”

The House can provide guests with a directed spiritual retreat for up to eight days, and can offer group retreats for up to 25 people. “We don’t want anything bigger than 25,” Father Eble says. “Small is beautiful.” He explains, “I give them different kinds of teaching. The big teaching we give is on forgiveness, on how to contemplatively, in a faith-filled way, let go of the need for revenge, let go of the resentment and anger, and that’s been very powerful.”

The House of Prayer is a joint project between the Archdiocese of Mwanza and Maryknoll. Initially the land was offered to Father Eble by Cardinal Jude Thaddaeus Ruwa’ichi, a Franciscan Capuchin, when he was still archbishop of Mwanza. “They agreed what was needed was a place of silence, stillness, simplicity, a place where people could really come home to themselves and deepen their relationship with God,” says Walter. “It had to be in a peaceful location, and the land that was offered was a perfect location because it overlooks beautiful Lake Victoria and is peaceful and just was the right place to offer a space for people to come to be at peace, to pray, to find themselves.”

Father Eble now works with Archbishop Renatus Leonard Nkwande. He describes the House as a partnership with the local church, and says, “This is all diocesan land and I see myself as serving the diocese.” 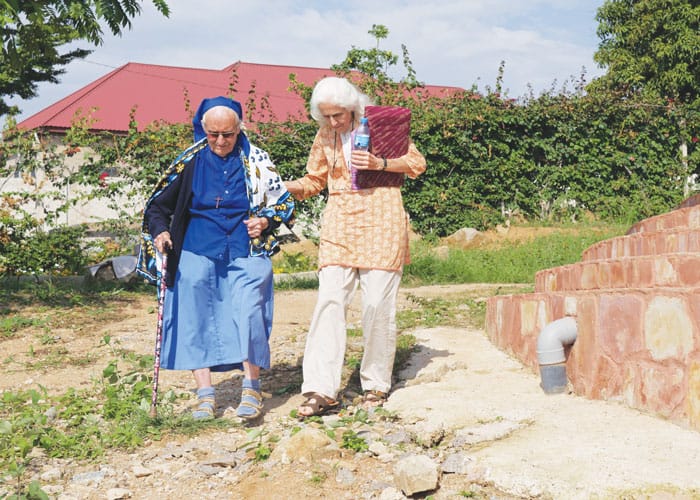 Maryknoll Lay Missioner Judy Walter (right) assists a religious sister on the grounds of the Lake House of Prayer on the shores of Lake Victoria. (Sean Sprague/Tanzania)

The House of Prayer is a way of reconnecting local people to a very African sense of tranquility while at the same time drawing on early Christian history, Father Eble says.

When he first arrived in Tanzania after his ordination in 1988, Father Eble worked for eight years among traditional tribal people in the African bush, including two years with the Watatulu people and six years on the Serengeti Plain. He says the silence and simplicity of rural village life contrasts sharply with the invading and disruptive noise of the frenetic activity of the city.

He describes “the contemplative rhythm of an African village, the silence between sentences, the patience just to be able to sit.” And he adds, “They can outwait a rock in the villages.” People who come to the House of Prayer, he says, easily make a connection with their origins in the normally quiet countryside.

Furthermore, Father Eble, says, the House of Prayer reconnects guests with another facet of African history and heritage, that of the Desert Fathers and Desert Mothers: the early ascetic, monastic tradition in North Africa from which Christian monasticism developed.

“We’re coming from that position of the experience of the desert that actually starts in the Gospel with Jesus and his own going to the site in solitude,” he says. “It started in Africa, this sort of stillness, silent meditation and prayer.”

“We try to create that atmosphere that is conducive to our modern African city,” he says. “We provide the simplicity and the silence for people to be able to let go of the noise outside, but also the noise inside.”

This Christmas Eve, as all year round, the Lake House of Prayer will rest in a silent night.