A Maryknoll immersion trip takes participants to Native American lands in South Dakota and Wyoming, where they learn about past and present Lakota struggles.

”All over the sky a sacred voice is calling your name.” — Black Elk, a Lakota leader and Catholic catechist

Within the hot summer winds last August, I could hear God Our Father calling to me and my Maryknoll companions: “Look, please. Don’t be fooled by the blue sky, the warm winds and the quiet. Feel. See. The people of this land are gifts to the world. Listen to their stories. Gaze upon their mountains. And, in the end, tell me what you saw.”

For one week, eight other Maryknoll immersion program participants and I, guided by a Lakota chief, took curious steps into the lands of the Great Sioux Nation. Sponsored by the Maryknoll Fathers and Brothers, the trip was designed to contextualize the experience of our Native American brothers and sisters. Deacon Dennis Holley — who notes that Maryknoll accompanies and serves Indigenous people around the world — promised we would “hear stories of suffering and resilience” and “gain firsthand insight” into an unfolding history.

Traveling in a van over dangerously narrow two-lane roads, we sought out the far corners of South Dakota and Wyoming.

Like time travelers, we skirted over and around the past. We paused at the memorials of Wounded Knee and the infamous Canton Asylum and at the remains of residential schools.

On Dec. 29, 1890, the Lakota had camped on the silvery edge of a crooked creek called Wounded Knee. That morning, shadowy outlines of the 7th Cavalry blurred in the mist on the hills. One shot rang out, then another. Cannon blasts tore the frozen ground. By the time the cannons finished echoing and the last rifle ceased smoldering, more than 300 Lakota men, women and children lay massacred on the snowy plain.

From 1902 to 1933, just for practicing their rituals, singing in their own languages, or dancing and pounding their drums, Native Americans could be placed in the Canton Indian Insane Asylum. Brutality and beatings — sometimes to death — followed. By the time the doors to Canton closed, 121 people were laid to their final rest in unmarked graves. Shadows of the “insane” have all but disappeared. The site is gone, the land turned into a golf course. Only a plaque commends the spirits there. A golf cart whizzed by as my companions and I, treading lightly over the sacred ground, whispered prayers for the lost men and women beneath our feet. 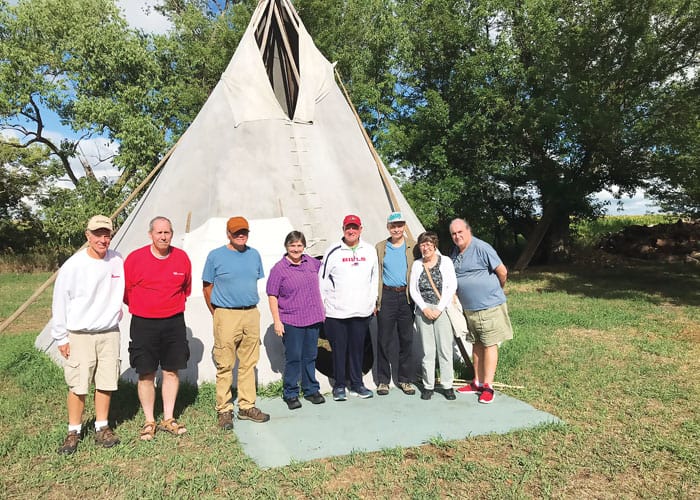 Participants in the Maryknoll immersion trip visit the teepee of their Lakota guide, an associate professor at the University of South Dakota. (Courtesy of Scott Giblin/U.S.)

Then there was the specter of the boarding houses or residential schools that forced the assimilation of Indigenous children. With the physical structures almost gone, memories of what happened inside them are scarred into the yellow grass. The tragedy of the treatment of the children and their families is lodged in books. But the wounds are etched on the faces of the first people of this land.

On this journey, the Lakota people were represented by Doctor Gary Cheeseman, associate professor of education at the University of South Dakota. Chief, sun dancer, storyteller — he opened his life to us Maryknoll visitors. He invited us into his teepee on Lakota ceremonial grounds and, inside, enveloped us with their creation story.

With the sun peeking through the top of the teepee, I stood in silence as the sweet smoke of burning sage was swept over me with an eagle feather. Swirling his medicine pipe to the four directions of the earth, the chief then shared the pipe, explaining, “There are no lies between us; we’ll always have this relationship by sharing and smoking this pipe.”

What contrast. On one hand, the Lakota chief generously proffered  the “real” story of his people in all its spiritual wealth. On the other hand, we witnessed the starkness of the Pine Ridge and Rosebud Reservations. Pine Ridge includes one of the poorest counties in the country. Housing is subpar at best. Native unemployment fluctuates between 80 and 90 percent. “On the reservations things change, but they don’t always change for the good,” Cheeseman said. 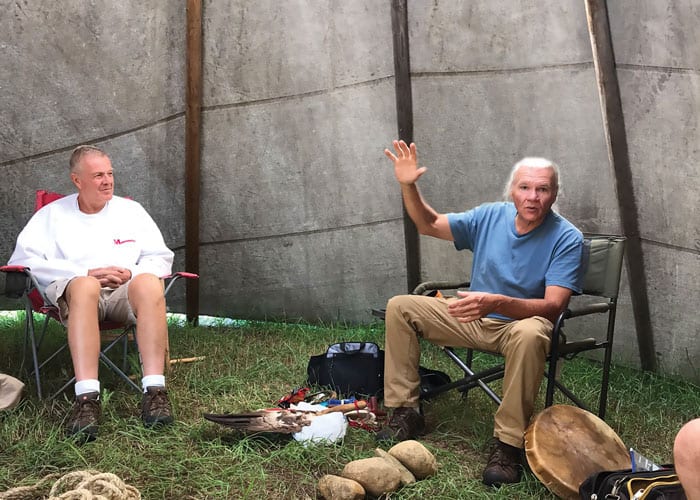 Cheeseman spoke of great Lakota leaders such as his mentor, Hunka. He made many references to the 19th century warrior chief, Crazy Horse. As I walked the ceremonial grounds where the sun dance is performed, I imagined the mighty spirit of Crazy Horse watching the dance, sitting on his noble horse.

We visited the unfinished monument to Crazy Horse in the Black Hills. After 70 years, the rock sculpture is still being carved into stone. The Crazy Horse Memorial is like the story of the modern Lakota: a story waiting to be completed. The memorial reminds visitors of what is yet to be accomplished — not only at this sacred site, but also in Native communities, through housing, job placement, better treatment for depression and substance abuse. As Cheeseman said, “When legends die, dreams end.” His whole life has been spent keeping the Lakota dream alive.

Dotted along the golden plains and the banks of the Missouri River there were also signs of hope.

In the heart of the Rosebud Reservation, St. Francis Mission stands as a beacon of empowerment. The Jesuits, or “Black Robes” as they were called, were invited to these lands by Chief Red Cloud, Chief Spotted Tail and Chief Two Strike; St. Katharine Drexel financed the first school. Today, in addition to its four churches on the reservation, the mission runs a recovery center, a dental clinic and eight community-based programs. Its Sapa Un Academy educates about 50 children, integrating Catholic faith with Lakota language and culture. 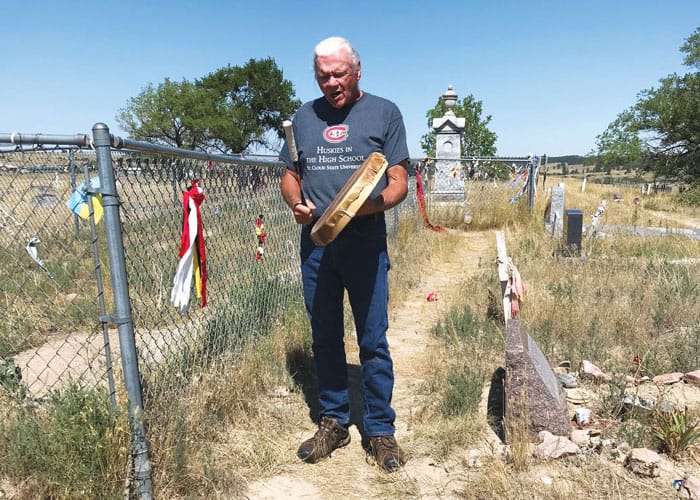 The other beacon of hope we visited, St. Joseph’s Indian School, sits between a stretch of cottonwood trees and the Missouri River. There, near Chamberlain, South Dakota, more than 200 Lakota children are educated and housed at no cost to their families. Run by the Priests of the Sacred Heart, the school’s approach is holistic. St. Joseph’s provides counseling services and medical care at a health center on the school campus, which also has a thrift store and a Lakota museum and cultural center. Horses are essential to the Plains peoples, and St. Joseph’s keeps horses as companions for students. Its mission is to be a home for healing and for dreams.

As we ended the week, with the warm August winds on the Dakota plains filling my lungs, there welled up in me a sense of desolate beauty. Looking back on our immersion experience, I see a painful history and a loneliness in the Lakota land. Yet, there is a great gift these people have to share with the world.

This is what I saw, and this is my prayer: to share this journey with you, so you can share it, too.

“Let every step you take on earth be a prayer.” —  Black Elk

Featured image: Created four years ago for St. Joseph’s Indian School in Chamberlain, South Dakota, this mural by Oblate Brother Mickey McGrath was shared by the artist with other participants in a Maryknoll immersion trip in August 2022. (Courtesy of Mickey McGrath/U.S.)