Congolese Church leaders and people take to the streets to demand an end to the violence overtaking their country.

Catholics and other Christians in Congo took to the streets Dec. 4 to protest increasing violence, often caused when neighboring countries seek the nation’s valuable minerals.

“No to the Balkanization of the DRC,” read one banner. “No to the hypocrisy and complicity of the international community,” read another. And a third read “The Congo is not for sale.”

The protest was called by the Congolese bishops’ conference and, in some areas, only the 6:30 a.m. Mass was offered so people could participate in the nationwide protests.

Cardinal Fridolin Ambongo Besungu, who was in Rome for a meeting of cardinals, voiced his support for the demonstrations.

“The purpose (of the march) is to express our anger with this recurring crisis that has lasted in the Congo for nearly three decades, and we do not see any solution in sight,” he said via video.

“Every Congolese citizen who loves his country and is touched by the suffering of his people must rise up to oppose the project of balkanization of the DRC,” Cardinal Ambongo Besungu said. He specified that the march had no political overtones, but was “to show the whole world that we are one people united for the national cause, united for the unity and sovereignty of our country but also for the dignity of our people.”

For nearly three decades, the country been shackled by violence, and the Catholic Church believes that the violence is imposed from outside, with the complicity of the international community.

In a message read by Father Paul Mateta of St. Mark Parish in Kinshasa, the bishops accused Rwanda, and to some extent Uganda, of perpetrating the violence in the East through the M23 terrorist organization.

“We want to denounce through our march some salient facts that are of great concern to us, notably the war of aggression imposed on the Democratic Republic of Congo by Rwanda and Uganda under the cover of the terrorist movement called M23,” said the message drafted by the bishops. Rwandan President Paul Kagame has always denied that accusation. 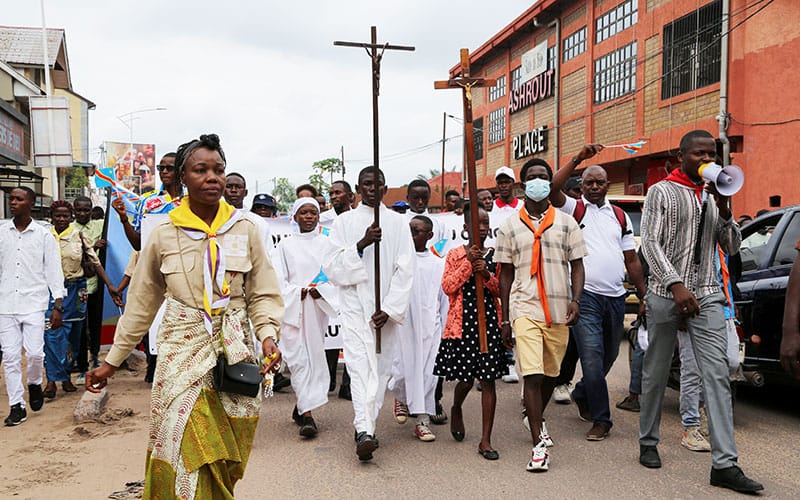 The M23 has been a permanent fixture in the East of the country and has been accused of targeting civilians. The most recent massacre targeted 50 civilians in Rutshuru, about 60 miles from Goma. The current crisis erupted in November 2021. The M23 militants overran several military posts of the Congolese army and conquered large swathes of territory, particularly in North Kivu province, just west of the Ugandan and Rwandan borders.

At the same time, Ugandan troops were deployed to the province to fight the Allied Democratic Forces, a Ugandan rebel group that also operates in North Kivu and Ituri. Congo has blamed Rwanda and Uganda for sponsoring these rebel movements and using them as cover to steal minerals so abundant in eastern Congo.

The letter also denounced international organizations such as the United Nations and its peacekeepers in Congo, MONUSCO; the European Union; Central African nations and others for standing by as massacres are carried out in eastern Congo.

“The horrors of war suffered by our compatriots in the eastern part of our country oblige us to send them a message of compassion and solidarity on this occasion; the sacrifices made by our valiant soldiers of the FARDC at the front push us to encourage them,” the bishops said.

But while Congo’s neighbors may certainly share in the blame, Bishop Sébastien-Joseph Muyengo of Uvira said he believes his nation needs be “resurrected or reborn from its ashes.”

“Everything that is happening in the East of our country is a sign of the absence of the state,” he told Catholic News Service.

He blamed the country’s politicians” who do not always play fair by betraying the country for money and power.”

Featured image: A young woman carries a cross during a march in Kinshasa, Congo, to protest escalating violence in the country, Dec. 4, 2022. (CNS photo/Justin Makangara, Reuters)