The Synod 2021-2024 has entered the continental stage, with regional representatives gathering at the Vatican to move the consultation forward.

VATICAN CITY (CNS) — While some people want to “reform” the Catholic Church and others want “to put the brakes on the synod process,” those involved in preparing the continental phase of the synod process want “to mend” the church under the guidance of the Holy Spirit and the pope, said Cardinal Jean-Claude Hollerich of Luxembourg, relator general of the synod.

As final plans are made for the continental phase leading to the Synod of Bishops 2023-24, the bishops and coordinators responsible for the regional meetings met at the Vatican Nov. 28-29.

Archbishop Broglio told Catholic News Service Nov. 30 that the meeting was “well-planned” and “quite universal,” while also making it clear how the “continental phase” was being organized differently in each part of the world.

Meeting Pope Francis late Nov. 28, Cardinal Hollerich said the synod process has faced “temptations” along the way. Particularly in the media, he said, there is a temptation to politicize the church, looking at it “with the logic of politics.”

“Some have an agenda for the reform of the church; they know very well what needs to be done and they want to use the synod for that purpose: this is instrumentalizing the synod. This is politicizing,” he said.

“On the opposite side are — to borrow your word — the ‘indietrists’ (literally, backwardists) who do not understand that a true Catholic tradition evolves while remaining a tradition in its time,” Cardinal Hollerich told the pope. “They, too, would like to put the brakes on the synod process.”

But, he said, the 30 participants from around the world who met at the Vatican in late November “want to be able to enter into a true discernment, an apostolic, missionary discernment, so that the synodal church can carry out its mission in the world. We want to walk together with you and, above all, with the Holy Spirit and with Jesus, in order to mend our church.”

The meeting at the Vatican was meant to help finalize plans for the regional gatherings called to reflect on the “Document for the Continental Phase,” a document released in late October and echoing the themes that emerged from all the national syntheses of synod listening sessions and the contributions of religious orders, Catholic movements, Vatican dicasteries and nuncios from around the world. 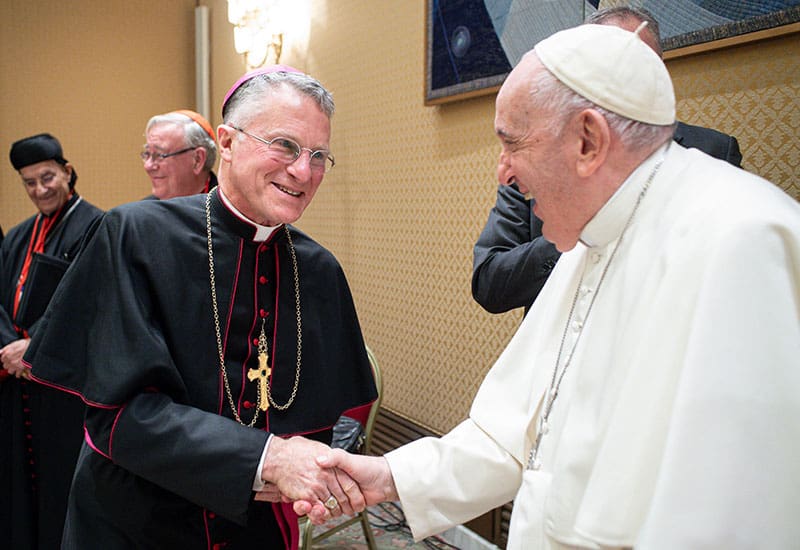 Pope Francis greets Archbishop Timothy P. Broglio, president of the U.S. Conference of Catholic Bishops, during a meeting with the presidents and coordinators of regional assemblies of the Syndod of Bishops at the Vatican Nov. 28, 2022. (CNS photo/Vatican Media)

Participants in the continental phase will be asked to discuss what in the document “resonates” with them or what they believe is missing, said Xavière Missionary Sister Nathalie Becquart, one of the synod undersecretaries.

Vatican News, reporting on the meeting Nov. 28, said representatives discussed some of the challenges the process already has raised, including “the small minority of people who have participated so far; the challenge facing the church regarding how she carries out her mission; the prevalence of personal piety rather than community-building practices and ritual; (and) the vast amount of information, proposals and suggestions that makes synthesizing or coming to conclusions difficult.”

In addition, Vatican News said, some participants saw “the need for a definition of ‘inclusive’ regarding how the voices and views of non-Catholics or former Catholics is envisioned; misunderstanding that the consultation process is meant to grant all of the requests people are raising; bringing out the voices of women is a challenge particularly in those places where societies are still patriarchal; (and) media interpretation of the synod from a sociological rather than ecclesiastical slant.”

The bishops of the United States and Canada have decided to hold 10 online sessions for their continental phase; the meetings, scheduled for 90 minutes, will take place from Dec. 14 to Jan. 21 with five sessions in English, three in Spanish and two in French.

Archbishop Broglio said the bishops chose the format to increase the number of people able to participate.

“I hope there will be an opportunity to listen to the concerns of different people,” he said. “If you do not listen, you do not know where people are,” which is essential for helping them come to a deeper relationship with Jesus.

Speaking to Vatican News, the archbishop said he hoped that listening and sharing would “help heal, at least as far as the church is concerned, some of the polarization” evident in U.S. society.

“I think the emphasis that’s been placed on listening will be a great help if people enter into these moments of conversation and dialogue and discernment with a spirit of listening to the other,” he told Vatican News.

The bishops of Latin America and the Caribbean also will hold multiple meetings, although all four will be in-person gatherings. The meetings are scheduled for El Salvador, the Dominican Republic, Ecuador and Brazil between Feb. 13 and March 10. The bishops also have decided that 55% of the participants will be laypeople while 45% will be bishops, priests, deacons and religious.

The European gathering is scheduled for Feb. 5-12 in Prague with 200 people attending in person and up to 10 more delegates from each country following online. Catholics from Australia, New Zealand and other parts of Oceania will meet Feb. 5-9 in Suva, Fiji.