SHARM EL-SHEIKH, Egypt — Vatican officials and other Catholic leaders around the globe believe the challenge of climate change requires a consensus-based approach rooted in solidarity, saying world leaders’ failure to come together and fully implement previous agreements is a threat to human well-being and the health of the planet.

At the U.N. climate conference, COP27, religious leaders are meeting various delegations of civil society groups, climate activists, experts and other faith-based organizations to deliberate on how to achieve climate neutrality — net-zero greenhouse gas emissions. The church leaders noted that such conversations across groups are essential in developing a consensus-based approach to decision-making in addressing climate change.

Leaders at the Nov. 6-18 climate summit were to discuss and commit to implementing strategies for such things as financing countries’ emissions-reduction goals and establishing new ambitions to keep global warming below 1.5 degrees Celsius. But church leaders say world leaders have not made significant progress on those goals yet, and it’s time for them to take action and save the planet from multiple climate hazards.

“There is no vision related to the environment from all the discussions of climatic factors we have received from the convening,” Archbishop Nicolas Thévenin, apostolic nuncio to Egypt, told EarthBeat, the environmental project of the U.S.-based National Catholic Reporter. “Our role is to focus on the spirit of togetherness that should be there and dominating all the meetings and topics being discussed. We should also find a solution on how as a church we must fight climate change and share the same ideas with other groups attending this event.”

The archbishop is the deputy head of the Holy See’s delegation, which for the first time has official representation at a Conference of Parties summit since they started almost three decades ago. Earlier this year, the Vatican announced it had become a formal party to the U.N. Framework Convention on Climate Change.

Archbishop Thévenin said the Holy See’s representatives would take advantage of their presence to address ways of tackling climate change and push wealthy countries to compensate poorer ones for the loss and damage caused by climate change.

“The main framework in which we are doing our role as Holy See is that we are not proposing technical solutions, but we can sometimes make people come together and be part of the solution,” he said, referring to various discussions the delegation has held with different groups to find a solution to climate change.

The archbishop said he believes that the planet can avert the worst consequences of climate change by all stakeholders coming together and finding solutions to combat it.

“In order to solve this problem of climate change, we must be more dependent on each other, listen to each other, and try to find common solutions,” he added. “Once we have discovered the approach together, we can see what to do to prevent the worsening of the situation and make the countries better places.”

At a Nov. 10 side event co-hosted by the Holy See, Senegal and Madeleine Diouf Sarr, chair of the Least Developed Countries group at the climate conference, the archbishop pleaded with wealthy nations to work together and find a solution to all climate-related issues and not to forget vulnerable communities suffering from the impact of polluting countries. 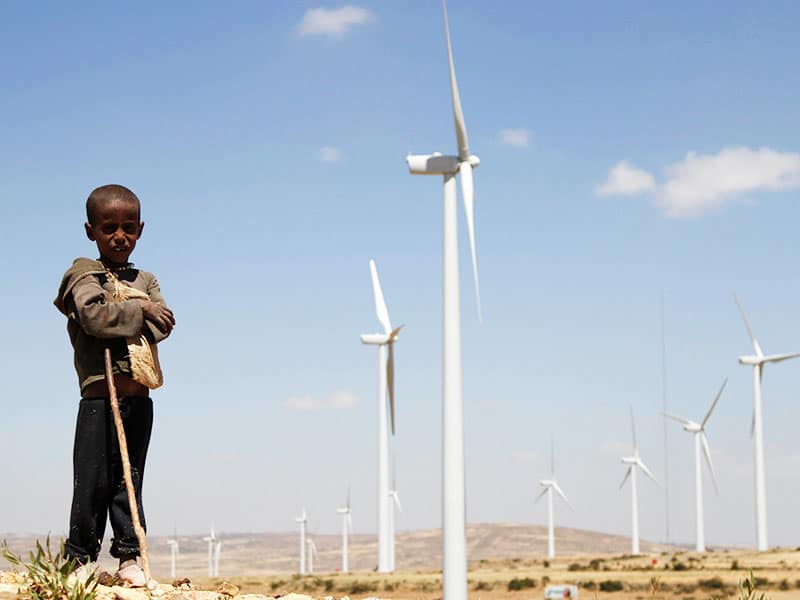 A boy is pictured in a file photo in front of wind turbines at the Ashegoda Wind Farm, near Mekele in Ethiopia’s Tigray region. At COP27, Catholic leaders urged consensus-building and solidarity to solve the global climate crisis. (CNS photo/Kumerra Gemechu, Reuters)

“It is imperative that we build bridges of solidarity. Those who are most vulnerable to the ravages of climate change are urgently calling for real support in this moment of crisis,” Archbishop Thévenin said in his statement addressing Catholics in the Senegal pavilion.

Different Catholic organizations attending the convening of COP27 agreed with his views and those of Cardinal Pietro Parolin, the Vatican secretary of state, who had earlier addressed the world leaders, reminding them that each had a responsibility to take action on climate change.

“We cannot allow for this to happen. Climate change will not wait for us. Our world is now far too interdependent and cannot permit itself to be structured into unsustainable isolated blocks of countries,” Cardinal Parolin said in his speech Nov. 8. “This is a time for international and intergenerational solidarity. We need to be responsible, courageous and forward-looking, not just for ourselves, but for our children.”

Aloysius John, secretary-general of Caritas Internationalis, the international humanitarian and development organization of the Catholic Church, said Caritas would not give up on pushing for its agendas at the COP27 convening or on finding solutions to tackle climate change that has severely affected communities around the world.

John told EarthBeat that Caritas’ main agenda is to continue advocating for developing countries and vulnerable communities, which continue to bear the brunt of consequences from the actions of wealthier nations. He said their push for the inclusion of loss and damage would ensure rich countries responsible for the largest share of greenhouse gas emissions compensate climate-vulnerable nations.

“As an organization, we represent the poor and vulnerable people around the world. Therefore, we want to make sure that the voices of the poor are heard,” he said. “Climate change is a very serious issue; in fact, it should be treated as a pandemic, because most people who are poor have gone through serious situations and are in dire need of help.”

Doreen Ajiambo, based in Kenya, is the Africa/Middle East correspondent for Global Sisters Report.

Feature image: Blossoms on a tree are pictured at sunset in Blackpool Tower Garden during a heatwave in England July 19, 2022. Heatwaves across multiple continents have dashed records, threatened public health and buckled infrastructure, signs of the climate crisis’ impact on day-to-day weather. (CNS photo/Molly Darlington, Reuters)