El Paso’s Bishop Mark Seitz remembers 5-year-old named Margareth Sofía, one of a reported 853 migrants who died so far this year on the U.S. border side alone.

WASHINGTON (CNS) — From an altar set on a platform just above the waters that straddle the U.S. and Mexico, Bishop Mark J. Seitz of El Paso, Texas, celebrated a Mass Nov. 5 to remember migrants who’ve died trying to cross the waters below or along the border in 2022.

In particular, he remembered a 5-year-old named Margareth Sofía, who died a few days before in the Rio Grande.

“She came from an impoverished town in southeast Guatemala,” the bishop said in his homily, recounting the news about her drowning. “The 5-year-old dreamed of working one day in Kansas, where she had relatives. She wanted to make enough money, along with her mother, to help her disabled 9-year-old brother.”

Trying to reach that dream, she began crossing the river, guided by her mother’s hand Aug. 24. In a matter of moments, the rip current grabbed a hold of the child.

First responders recovered her little body from the river.

“Normally, the Rio Grande, Rio Bravo (as it’s known on the Mexico side) doesn’t have enough water to be of threat to anyone,” the bishop said. “But you remember the strong storms we had at the end of August.”

Local Spanish-language media in El Paso reported that she was the fourth child to die in the river in a span of 24 hours in late August at the popular passage for border crossers.

The weekend Mass, just a few days after All Souls’ Day, marked the 25th time that the border cities of El Paso, Las Cruces, New Mexico, and Ciudad Juárez, Mexico, have gathered to pray for those who have died trying to reach the U.S.

To date this year, Bishop Seitz said, border authorities have reported 853 migrant deaths on the U.S. border side alone. It’s a number that doesn’t include those who have died in the Darién Gap, a thick jungle that connects South and Central America where many migrants travel through trying to avoid authorities.

The statistics also don’t show those who have died at the hands of organized crime in Mexico and Central America, he said.

“As we gather, we’re conscious that there are many who have not arrived safe and sound to this temporary worldly destination,” Bishop Seitz said. “It’s possible that their stories are never told until we meet them in the kingdom of God. Each one of these deaths is a lost loved one, but one never forgotten, hurt that will never end, a story that deserves to be told.” 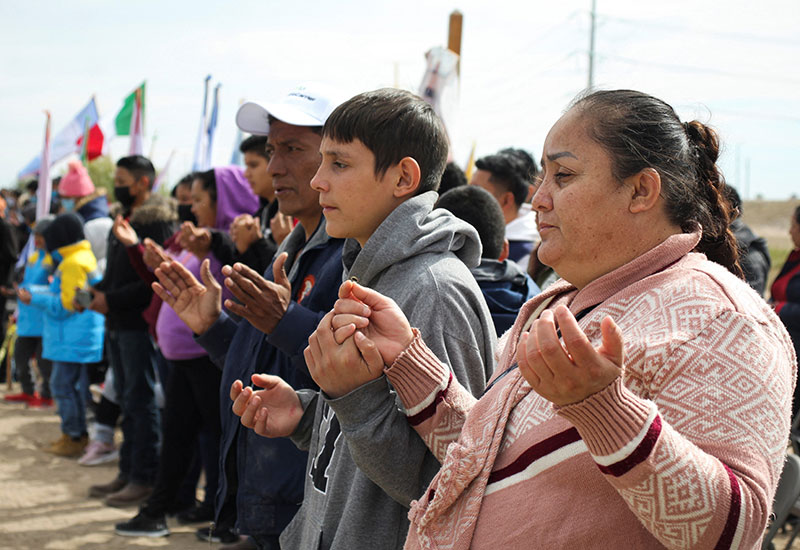 People in Ciudad Juárez, Mexico, pray during a binational Mass celebrated Nov. 5, 2022, in memory of migrants who died during their journey to the U.S. border. Catholics from El Paso, Texas, also attended. (CNS photo/Gabriel Barraza, Reuters)

Bishop Seitz, who is set to become the chairman of the U.S. Conference of Catholic Bishops’ migration committee in mid-November, was joined by Bishops José Guadalupe Torres Campos of Ciudad Juárez and Peter Baldacchino of Las Cruces. They concelebrated the Mass.

The border Mass attempts to physically take place in the U.S. and Mexico. Sometimes an altar has been set up, half in one country and half on the other, connected though the border fence, with priests sometimes offering Communion through the small openings of the wall to Massgoers on the other side.

“A border is a human creation but … there is a higher authority that also calls us brothers and sisters, children of God,” Bishop Seitz told local ABC affiliate KVIA-TV in a Nov. 5 interview. “Yes, we need borders, but even more important is that we remember that we are of the same human family, that we treat each other that way.”

Along with remembering those who have died, Bishop Seitz told the news station, those gathered also pray that “we as nations might come to a just and orderly process by which people who need to cross, can cross and (ask for) asylum,” and those who need to work “can come and work and then this way avoid so much of the pain that takes place when people have to flee from their homes.”

He has criticized Title 42 of the Public Health Safety Act, which keeps asylum-seekers out at the border, citing health concerns because of the coronavirus pandemic.

Recently, he visited a group of Venezuelans on the Mexico side of the border who had been denied entry because of the health rule and are now living in tent camps near the Rio Grande.

“We ask ourselves, what can be done to put an end to so much tragedy, so much loss, so much pain,” he said in his homily. “I think the answer is, in a certain sense, under our noses. It’s here at this border.”

The borderlands are a place of encounter between two great nations, great communities on both sides, he said.

“In spite of what seeks to divide us, we continue to be a binational, interconnected and dynamic, proud community,” he said, according to the text of his homily. “We’re not a place of confrontation but rather a place of encounter. We belong to one another. Our economies depend on one another.

“We are people of faith, we work, study, we live as families with members on both sides of the border.”

He said he wished that some could see the people who flock to the U.S. border, not as potential enemies but as “brothers and sisters they haven’t met.”

“If we could welcome people who need to cross our ports of entry in an orderly manner and allow in those who need to find safety and those who need work the opportunity to do so, then we could put a stop to those few who should not be allowed to cross,” he said. “There has been much suffering in this place but it’s also a place of great hope.”

He ended by referencing the first reading from the Book of Lamentations (3:22-24):

“The Lord’s acts of mercy are not exhausted, his compassion is not spent,” he said, “It is good to hope (and work) … for the Lord’s deliverance.”

Featured image: Bishop Mark J. Seitz of El Paso, Texas, center, and other Catholic clergy from Ciudad Juárez, Mexico, and El Paso take part in a binational Mass on Nov. 5, 2022, in memory of migrants who died during their journey to the U.S. near the border between Mexico and the United States. (CNS photo/Gabriel Barraza, Reuters)