Asia’s Catholic bishops see peace and reconciliation and “bridge-building” among different religions and traditions as the way forward.

Catholic bishops in Asia have committed themselves to engage with governments, non-governmental agencies and civil organizations to respond to issues affecting the Church and society in their work for a better Asia.

“We believe that peace and reconciliation is the only way forward. We have envisaged new pathways for our ministry based on mutual listening and genuine discernment,” said the bishops in a statement issued on Oct 30, at the end of a two-week-long general conference.

The Federation of Asian Bishops’ Conferences (FABC) organized its first general conference as a part of its golden jubilee celebrations that brought together some 20 cardinals, 120 bishops, 37 priests, eight nuns, and 41 laypeople.

The conference, with the theme “Journeying together as Peoples of Asia” sought to reaffirm the Federation’s work of the past 50 years aiming to “revitalize the Church, and envision new pathways of service.”

One of the paths they identified was “bridge-building” among religions and traditions and also “principled engagement with governments” and non-governmental agencies on issues of human rights, eradication of poverty, human trafficking, care of the earth, and other common concerns.

“The escalating violence and conflicts” in Asia call “for dialogue and reconciliation,” the bishops said without particularly naming any issue or any nation.

They also identified the need for “listening to others in genuine dialogue” as a new path to “promote a culture of peace and harmony in collaboration with our brothers and sisters of neighboring religions and traditions.”

“Neighboring religions” is a new terminology the Asian bishops began to use in the general conference as a substitute for other religions, which often dominate Asian nations and their cultures.

“We need to transform ourselves by fostering a culture of reciprocal listening where we listen to each other and all of us listen to the voice of God,” the statement said.

The bishops also expressed their intention “to improve the way” they form themselves “in faith and accompany our families and communities, especially those in difficulty.”

The bishops’ statement said their discussions and deliberations were “inspired by the hope, courage, and determination shown by the Churches in Asia to journey together and work with more dedication for a better Asia.”

What challenges the Church and society in “our multifaceted continent” is the cry for help and justice from “the poor, deprived, and marginalized.” 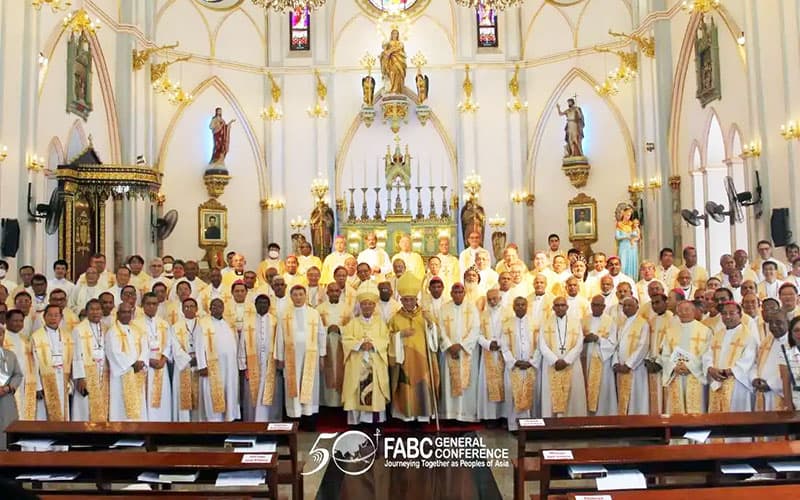 Asian leaders and delegates gathered for the FABC 50 general conference in Bangkok pose for a photograph at the Cathedral of the Nativity of Our Lady, Bang Nok Khwaek. (Photo: FABC Facebook page via UCA News)

The anguish of refugees, migrants, displaced and indigenous peoples and the exploitation of nature and impacts of climate change are also challenging the Asian people, they said.

The dream of youth seeking more significant roles in the Church and society, women seeking “an inclusive Church that respects their dignity” and families looking for support are also challenges for the Church, they said in the statement.

The bishops said one of the concerns was the “pain and suffering of some churches that need to receive relief through our empathy and solidarity.” However, they did not name any national church.

“The rising voices of extremism that need to be responded to wisely” and there is an “urgent need for a greater respect for life to be inculcated in society,” they said without naming any particular issues.

The digital revolution in Asia has both positive and negative impacts on society, they said expressing it as one of their concerns.

The bishops’ statement concluded by assuring the “people of this continent that the Catholic Church in Asia will always work for a better Asia and the good of all our people.”

Featured image: Employees wearing face masks work at a factory of the component maker SMC during a government-organized tour of its facility, following the outbreak of COVID-19, in Beijing May 13, 2020. Catholic bishops in Asia have committed themselves to engage with governments, nongovernmental agencies and civil organizations to respond to issues affecting the church and society in their work for a better Asia. (CNS photo/Thomas Peter, Reuters)