SÃO PAULO — In Brazil, like most countries, prison ministry involves visiting and praying with inmates, but as Brazil’s prisons increasingly are treated as moneymakers, the ministry also means advocating for the rights of prisoners.

People who work in the Brazilian bishops’ prison ministry can tell of the problems: lack of running water during most of the day, poor hygiene, overcrowding, insufficient and low-quality food, and disrespect for basic human needs, including access to health care services.

The bishops started the prison ministry 50 years ago, and German-born Sister Petra Pfaller, a member of the Missionaries of Christ who heads the program, sees money as one of the driving forces in Brazil’s prison system today.

“The Brazilian law offers many ways for a defendant to wait for trial out of custody. People with money can hire attorneys and manage to stay out of prison. The poor cannot do that,” she said.

“The Brazilian state has opted for a highly repressive policy when it comes to conflict resolution,” she added. “And it targets poor, Black young residents of slums.”

Recent data released by the Brazilian Forum of Public Safety showed that almost 70% of the prisoners are Black. Almost half of them are young men aged 18-29.

The fact that 30% of the prisoners have not been convicted yet is another signal of the system’s “social selectivity,” said Sister Pfaller.

Mass incarceration generates much money, Sister Pfaller added. In general, the state buys food and clothes from private providers with large amounts of public money involved. To make things worse, over the past decades, many penitentiaries have been built and administered by private companies, which are paid according to the number of detainees.

Mayra Balan, a lawyer for the prison ministry, told Catholic News Service: “Privatization has transformed the mass of people who break the law into commodities. There is a continuous pressure to expand that system. In states like Minas Gerais, for example, the proportion of private prisons is already high.” 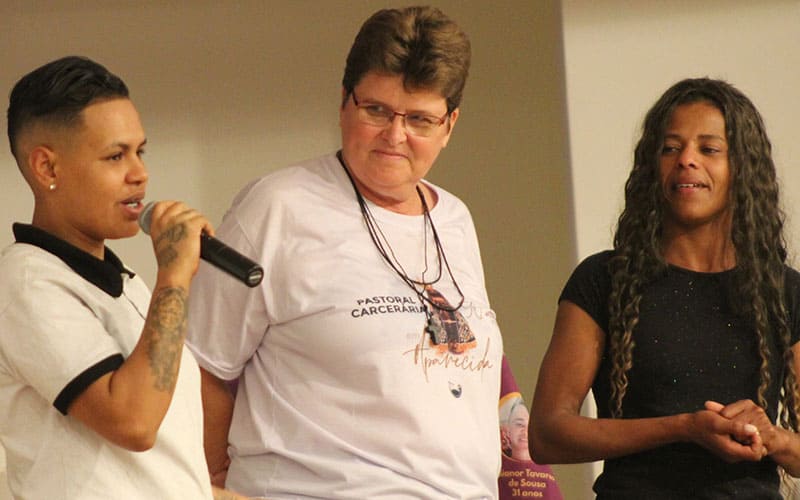 “In the case of privatized penitentiaries, nobody wants to assume responsibility for those problems. The state blames the company, and the company blames the state. The detainees end up being the ones who suffer,” Balan said.

Things can be even worse in women’s prisons, she added. Most of the women detainees are arrested for crimes connected to drugs — they usually get involved with such activities because of their partners.

Disorders connected to depression and anxiety are common. Balan said the penal system deals with those problems by medicating women prisoners. “They are ‘kept under control’ with psychotropic drugs. When they leave prison, they continue to be dependent on such drugs,” she said.

Karine Vieira, 40, experienced the harsh reality of the Brazilian penal system in 2005 when, at age 23, she was imprisoned for drug trafficking.

“In prison, you are not a human being anymore. You become a number. You suffer psychological and moral violence on a daily basis,” she told CNS.

Vieira had strong ties to criminals, so she managed to obtain better conditions in jail — her cell had “only” 24 inmates for 12 beds, and she had the means to buy and cook her own food.

“But we were humiliated every day. Guards would inspect our cell and throw soap in our food, for instance,” she recalled. Once, Vieira had to be hospitalized due to breathing problems. “It was a devastating experience. I was treated indignantly all along the process,” she said.

Vieira ended up being found not guilty due to juridical inconsistencies in her case and left the prison after six months. 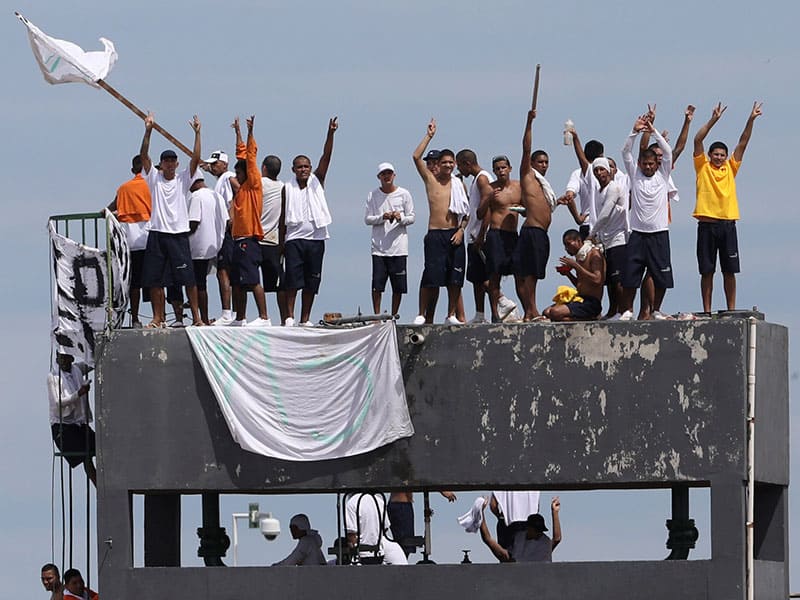 Inmates at the Puraquequara prison in Manaus, Brazil, are seen on the roof during a riot May 2, 2020. In Manaus, where more than 100 detainees were killed during riots in 2017 and 2019, prisons have been privatized. (CNS photo/Bruno Kelly, Reuters)

Today, she runs Instituto Responsa, a nongovernmental organization that helps to educate people who left prison and introduces them to companies that can hire them.

Divine Word Father Patrício Brennan, who since 2015 has been working with the prison ministry in Altamira, said after a 2019 riot that resulted in 62 deaths, new prisons were built to reduce overcrowding.

In Manaus, where more than 100 detainees were killed during riots in 2017 and 2019, all prisons have been privatized, and violence is omnipresent.

“A boy steals a cellphone and goes straight to jail. There, he will be submitted to (criminal) commanders. Things can only get worse like that,” said Maria Nazaré Saraiva Alcântara, coordinator of the prison ministry in the Archdiocese of Manaus.

Gangs control prisons. Newly arrived detainees usually have to join the gangs, which results in more involvement in criminal activities.

“For the system, it is all going well. The companies in charge of the prisons receive more money if there are more people imprisoned. Maybe that is why mass incarceration is getting worse,” Alcântara said.

Sister Pfaller said since President Jair Bolsonaro took office in 2019, violence has been growing in the penal system. A former army captain, Bolsonaro has been a supporter of violent police actions against criminals — and his rhetoric and actions have resulted in a greater militarization of prisons, she said.

“During the COVID-19 pandemic, when visitors — and pastoral agents — were impeded to get into prisons, the denouncements of torture grew exponentially,” she added.

Despite the intensification of those longtime issues concerning the Brazilian prison system, Father Valdir Joao Silveira, Sister Pfaller’s predecessor as head of the prison ministry, said the ministry has managed to “avoid even greater injustices … over the past 50 years.”

“The prison pastoral ministry has fought for the creation of several laws that concretely reduced the penal system in the country. We also struggled against torture inside prisons and helped to establish the official organism that combats it in Brazil,” he said.

The priest said the ministry was behind the implementation of the public defender’s offices in several regions of the country. It also promoted an agenda against mass incarceration, gathering several social movements in a broad alliance.

“We have always faced many difficulties,” he said, noting that even some Catholic are suspicious of people who minister to prisoners.

“We do not have the necessary structure to work. But we have always fought for the people. I am certain that if it was not for us, things would be much worse,” Father Silveira said.