Church and international leaders cite reports of Ukrainians, including children, being subjected to mass deportations.

WARSAW, Poland (CNS) — Ukrainian bishops backed U.N. reports that civilians are being forcibly deported from Russian-occupied areas of their country, recalling scenes from earlier decades. “Although we don’t know precisely where people are being sent, or on what scale, these deportations are certainly happening,” said Bishop Stanislav Szyrokoradiuk of Odesa-Simferopol.

“Many children are being taken from orphanages in Kherson and other occupied towns — and though some have tried to return, this hasn’t been possible. It’s just one of many human rights violations we are witnessing.”

In a Sept. 9 interview with Catholic News Service, he said it had been difficult to make “clear factual distinctions between deportations and evacuations,” or to obtain data on “forced and voluntary” relocations.

“While most Catholics from war-affected areas have escaped to Poland and the West, some pro-Russian citizens have also gone East, perhaps believing life will be better there,” Bishop Szyrokoradiuk said.

“But efforts are also underway to take as many Ukrainian children as possible and turn them into new people who’ll belong to Russia. Just as in past history, when Ukrainians were also taken away, children are being used for propaganda, to show how kind the Russians are.”

Since Russia’s Feb. 24 invasion, reports have circulated that civilians from Ukraine’s partly occupied eastern Donbas region and cities such as Mariupol and Kharkiv have been interrogated in “filtration camps,” before being sent to Siberia and other parts of Russia, although Moscow has insisted it offered humanitarian assistance to Ukrainians wishing to relocate voluntarily.

In a Sept. 8 website post, the Russian Orthodox Patriarchate showed Patriarch Kirill greeting Ukrainian children and teenagers from “liberated regions” of the Donbas, Kharkiv and Kyiv at a meeting in Moscow.

The post said Patriarch Kirill had told the youngsters his patriarchate “considers all the Orthodox of Ukraine to be its children” and had warned them against calls to “reject their true identity for the sake of a false one.”

Bishop Szyrokoradiuk said the photographs had been “used for Russian propaganda” and had “nothing in common with truth or faith.”

“It’s hardly surprising these children looked unhappy, given they’ve been taken from their homeland and cut off from their national roots,” the bishop said. 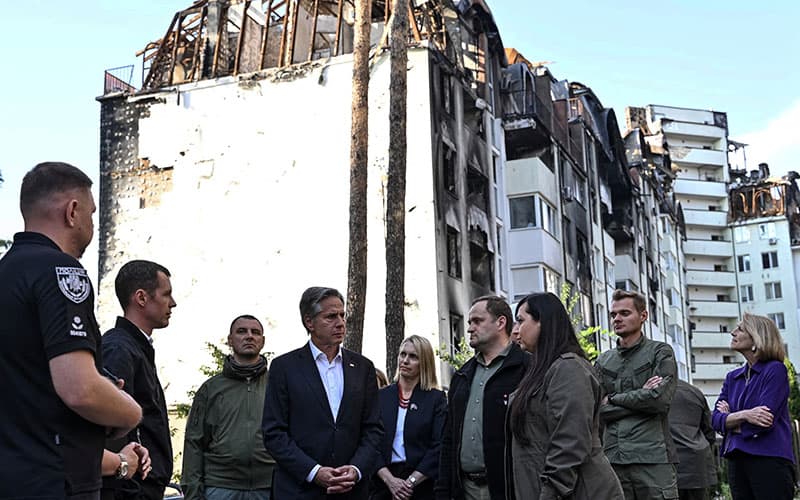 “This war has already broken all bounds of restraint and lawlessness — it has turned into a wave of terror, in which whole towns and cities are destroyed with their inhabitants, and all efforts made to erase the very idea of Ukrainian nationhood,” he said.

Speaking at a Sept. 7 U.N. Security Council open briefing, Ilze Brands Kehris, U.N. assistant secretary-general for human rights, said the U.N. had heard “credible allegations” that unaccompanied children were being “forcibly transferred” and offered for adoption by Russian families after being given Russian citizenship.

The Latvian official added that Russian forces had subjected civilians to “invasive security checks” and “numerous human rights violations,” with those deemed close to the Ukrainian government sent to penal colonies and detention centers or subjected to “enforced disappearance.”

“We urge the Russian Federation to grant unimpeded and confidential access to our office and other independent international monitors to all places of detention under their control,” she added.

Vasily Nebenzya, Russia’s U.N. ambassador, rejected the “unfounded allegations” and said Ukrainians were fleeing their country “to save themselves from its criminal regime.”

The following day, Ukrainian Catholic Archbishop Sviatoslav Shevchuk of Kyiv-Halych said it was believed 2.5 million people, including 38,000 children, had so far been sent to Siberia and Russia’s far east, in a “great wound to the Ukrainian nation.”

Auxiliary Bishop Jan Sobilo of Kharkiv-Zaporizhzhia told CNS Sept. 9 his diocese had lost contact with some Catholics who expressed fears of being sent to Russia, adding that the aim of the deportations appeared to be to “weaken the national spirit” and forcibly move Ukrainians to underpopulated areas of Russia.

“It’s hard to believe we’re seeing a repeat of actions from a century and more ago and a return to such primitive, drastic methods, which will be remembered for generations to come,” the bishop told CNS. “Those sent long ago to Siberia and Kazakhstan never lost their spirit or national awareness. Yet they’re (Russians) making the same mistake by forcibly moving people again.”

Millions of East Europeans were deported to hardship and death in Siberia and Central Asia under tsarist and later Soviet communist occupation. Although many returned from prisons and labor camps in later decades, substantial Polish, Ukrainian, Lithuanian and other minorities still remain across Russia today.

The deportation of “individuals perceived as having pro-Ukrainian or anti-Russian views” was cited in a June 29 report by the U.N. High Commission for Refugees, as well as in a July 14 report by the Organization for Security and Cooperation in Europe and a Sept. 1 report by Human Rights Watch, which said the forcible transfer of civilians to the territory of an occupying party was prohibited under international humanitarian law, including the 1949 Geneva Conventions.

In July, U.S. Secretary of State Antony Blinken said a “variety of sources” indicated Russian forces had interrogated, detained and forcibly deported up to 1.6 million Ukrainians, including 260,000 children, in “an apparent effort to change the demographic makeup of parts of Ukraine.”

Featured image: A Ukrainian boy named Gleb, 4, looks out from behind a gate with shrapnel marks on it, in the village of Pereizne, in direct proximity of the front line in the war-affected area in eastern Ukraine, in this Aug. 28, 2022, file photo. Ukrainian bishops have confirmed U.N. reports of mass deportation of Ukrainian civilians — including children — to Siberia and Russia’s far east. (CNS photo/Ammar Awad, Reuters)