Having struck the Philippines, where Caritas is leading relief efforts, Typhoon Noru is now headed toward Vietnam.

MANILA, Philippines (CNS) — Church groups in the Philippines issued an emergency appeal for aid to assist thousands of victims after Typhoon Noru hit the country, leaving a trail of devastation.

The typhoon, dubbed the strongest storm to hit the Philippines this year, made landfall Sept. 25, hitting hard in Quezon and Bulacan provinces near the capital, Manila. Ucanews.com reported the Department of Interior and Local Government said about 75,000 people were evacuated to safety before the typhoon made landfall.

On Sept. 26, the Catholic charity Caritas appealed to people to offer aid to the survivors with things like food packs. It also sought shelter materials like galvanized iron sheets, nails and lumber.

“Our primary concerns are the babies and the elderly, because they are the most vulnerable. We visited their homes to see if there is a need for them to be evacuated to the parish,” Caritas member Edna Torijos told ucanews.com. Torijos said those who decided who followed the government’s advice for preventive evacuation stayed overnight at a parish.

“Some of the members of our group were in the church making soup for the evacuees. We have more than 200 people sheltering in the church. They were afraid of the typhoon,” she added.

The parish priest of St. Anthony of Padua Parish in Casiguran said government authorities forced people living in dangerous sites, like below mountain ranges, to evacuate because of possible landslides.

“Their place is dangerous. We are just making sure that they’re safe. The rain was too strong and the river was overflowing. Landslides could be next,” Father Joefran Talaban told ucanews.com. 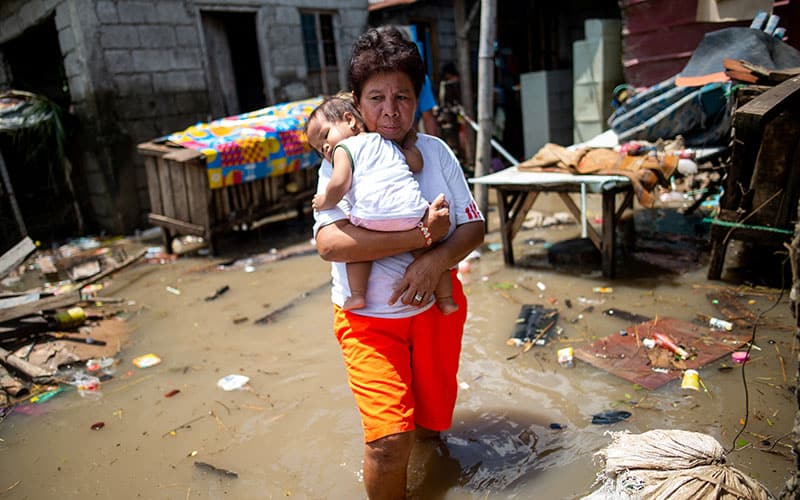 A woman carries a child through floodwaters Sept. 26, 2022, after Typhoon Noru hit Bulakan, Philippines. Noru left a trail of destruction in northern Philippine provinces with at least eight people dead, including a group of rescuers who were scrambling to save villagers trapped in floodwaters, officials said. (CNS photo/Lisa Marie David, Reuters).

Anna Truong Thi Tuoi, who lives alone in a small house, said volunteers used a boat to move her to the church. Her house has been engulfed in flood water from a nearby river.

“I feel safe here as I am scared stiff of storms that can cause a sad loss to my family,” Tuoi said. In 2006, Typhoon Xangsane destroyed her house and killed her husband.

Benedict Tran Manh Hoa, a fisherman from Thuan Phuoc village in Quang Nam province, said 60 households, including his, were evacuated to Hoi An church to avoid the storm.

Francis Xavier Ho Van Phuoc, a member of Hoi An parish council, said the parish provided housing, rice, instant noodles, drinking water and other basic needs to evacuees, regardless of their religious background.

“We are preparing food, washing facilities and using motorbikes to carry old people, children and women to the church,” Phuoc said.

Lovers of the Holy Cross Sister Anna Nguyen Thi Nguyet, head of a 12-member community in Quang Tri province, said the sisters had one ton of rice and instant noodles available and were baking 200 loaves of bread per day to serve 100 evacuees in their community during the storm.