Local pastoral leaders in the U.S. share how their parishes are celebrating the Season of Creation, observed Sept. 1 to Oct. 4.

WASHINGTON — As the pastor of Francis Xavier Church in Moundsville, West Virginia, Father That Son Nguyen has his ears tuned to hearing about the needs of the world all around. From a pregnant mother with young children — who is in want of a crib or a stroller — to threats to the environment — from a proposed cracker plant across the Ohio River — Father Nguyen believes as a priest he has a responsibility to protect all life from harm.

“To be able to sit down and listen, that’s very important,” the Vietnam native told Catholic News Service. Father Nguyen said he takes every opportunity he can to bring awareness to his parishioners in the West Virginia panhandle town to tie together the needs of people with the needs of the earth.

He can be found addressing the concept of integral ecology as expressed by Pope Francis in his encyclical “Laudato Si’, on Care for Our Common Home.” Such efforts are important, he said, because people must realize that all life on earth is connected and that humans are called to actively protect what God has created.

To open this year’s Season of Creation, St. Francis Xavier hosted a workshop Aug. 30 on the encyclical.

St. Joseph Sister Theresa Metz and parish staffer Sister Agatha Munyanyi, a member of the Sisters of the Child Jesus, discussed this year’s theme, “Listening to the Voice of Creation” in the parish presentation.

Father Nguyen is among priests across the country who are involved in myriad ways in promoting the encyclical and the ecumenical Season of Creation observed by Christians worldwide from Sept. 1-Oct. 4, ending on the feast of St. Francis.

Some clergy are leading efforts in parishes to create more awareness of the pope’s message while others have willingly encouraged parishioner-led practical, educational and Scripture-based endeavors.

Lonnie Ellis, executive director of In Solidarity, works with clergy and Catholic faith leaders seeking to reach beyond the church community to share Laudato Si’ themes. He has initiated discussions of Catholic social teaching on the environment in several states including Iowa, Michigan, Pennsylvania and West Virginia. 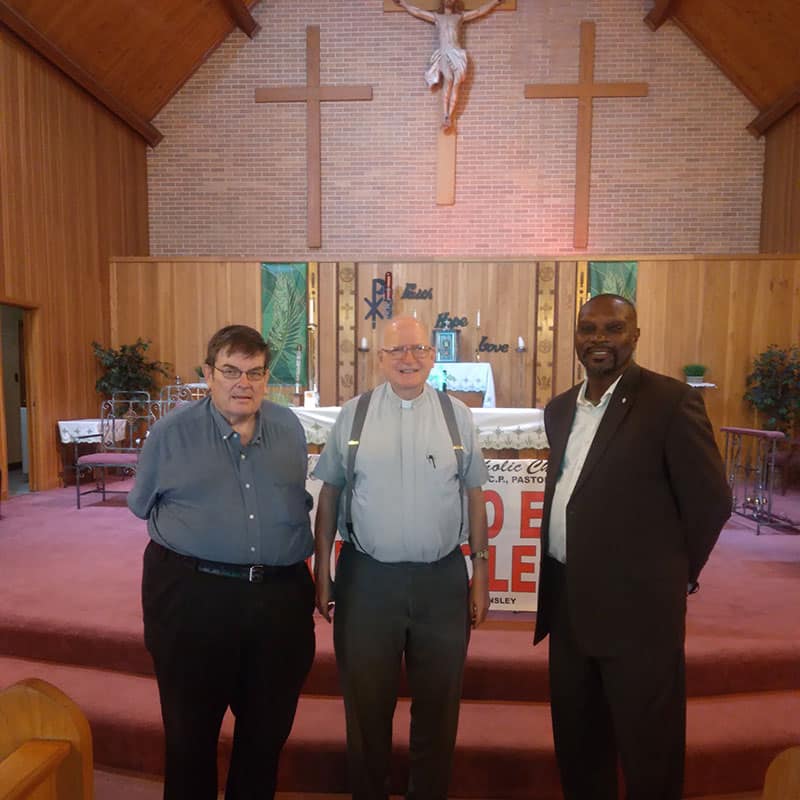 For Father John Grace, pastor of Immaculate Conception Parish in Hampton, Virginia, the call to protect the environment is a year-round exercise that is rooted in Scripture and long-standing Catholic social teaching. He has worked beyond parish boundaries to help the wider community understand the importance of the actions any faith community can carry out.

It’s from the book of James, one of the shortest in the Bible, that Father Grace particularly draws inspiration — the understanding that the manifestation of faith is expressed in “the work of our beings.”

Caring for a creation is a moral duty, Father Grace told CNS. It’s a point he stresses to parishioners, who have come to understand that their efforts today will have a lasting impact on the planet and its inhabitants.

“The environmental stuff is important because it is a gift of God. So morally I am responsible to be a good guardian of the gift,” he said. “I didn’t create the universe. I didn’t create my own existence. It begins as a gift to me. So the moral imperative is how well am I using the gift.”

Such understanding of Scripture has led the parish to install more than 400 solar panels on the church, classrooms, rectory and administrative offices beginning in 2019. It is the first Virginia parish to be 100% solar.

Immaculate Conception parishioners also have contributed funds to provide 11,000 trees for planting in Kenya through the International Small Group Tree Planting Program. In 2021, the parish raised $17,000 to purchase water filters for 250 Navajo Nation families in Arizona who do not have access to clean water or electricity.

“I call this over-the-horizon experiences. What I mean is the solar panels will last 35 years. The trees are good for 50 years and the water filters are lifetime,” Father Grace said. “This is attracting the attention of older people because this is sort of their legacy. We are leaving our camp site better than we found it.”

At another Immaculate Conception Parish, this one in Durham, North Carolina, Franciscan Father Jacek Orzechowski, pastor, is guiding church members through the seven-year Laudato Si’ Action Platform, an initiative introduced by the Vatican Dicastery for Integral Human Development last fall. 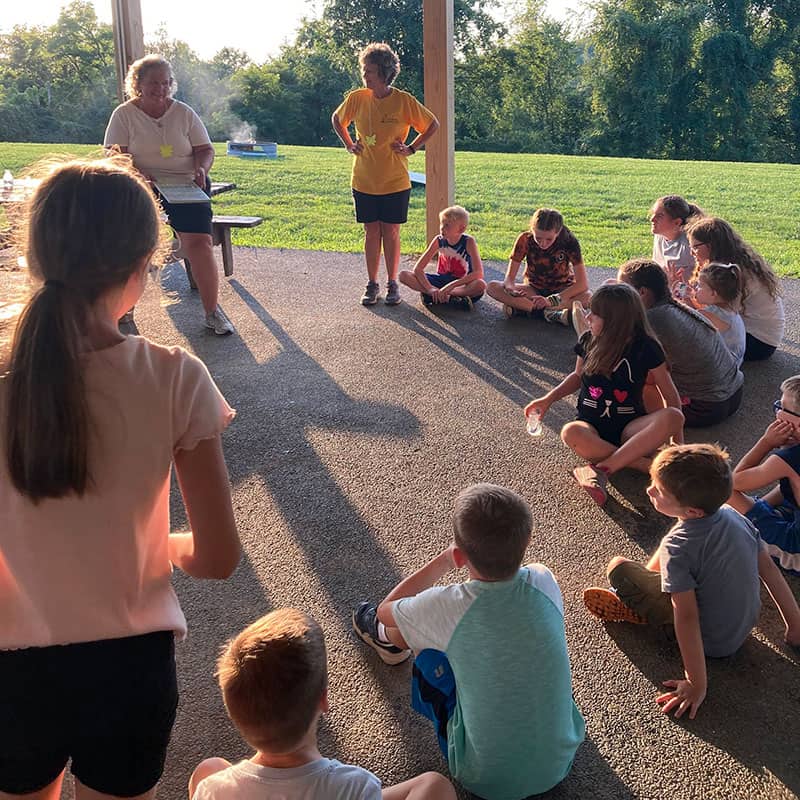 The goal is to help the parish, of which 60% of members speak Spanish, to develop an “ecological spirituality,” he said. The Polish-born priest regularly preaches at Mass about care for creation and ecological themes found in the Scriptures. A parish committee distributes resources and prayers related to ecological care as well.

“For me, the Gospel compels me to respond to the cry of the poor, the cry of the earth,” Father Orzechowski said. “The issue of climate justice and the issue of the biodiversity crisis are among the most urgent and significant moral issues facing us as a church and humanity.

“They are not just political issues, economic issues, but they are profoundly spiritual,” he added. “They are the core of our faith in a way.”

Prior to Father Orzechowski’s arrival in 2020, parishioners already were spearheading green initiatives in response to the papal encyclical. The headliner project was the installation of solar panels that provide about 20% of electricity needs for the church and parish school.

Not all parishes and pastors have taken on such large-scale undertakings in response to Laudato Si’.

Father Paxton said he draws from resources developed by the Passionist order that are being sent to their priests nationwide for use in parish life.

“The Passionists as a congregation are trying to respond to Laudato Si’ as an answer to Pope Francis’ call for the whole Church to get involved. So that’s where I’m trying to begin,” he said.

“Pope Francis just gives a straight-forward, faith-filled response to what’s going on. I think it’s this whole concept of integral ecology, where it’s about how we treat each other as human beings. It’s integral to how we treat everything else, all of creation,” he explained.

Parishioners at the three Passionist-staffed churches around Birmingham — Holy Family, nearby St. Joseph and St. Mary in Fairfield — are planning a special Mass Oct. 4 to close the Season of Creation.

John Meehan, a St. Mary parishioner, told CNS the Mass is meant to raise up Catholic teaching and encourage others to join the decades-long faith-based environmental work of the three parishes.

Meanwhile, to help parishes celebrate the Season of Creation, Jesuit Father James Hug has developed a Catholic liturgical guide that can be used throughout the five-week period. It includes prayers based on the sacramentary, appropriate musical suggestions, Scripture reflections and general intercessions.

Father Hug, who serves as sacramental minister for Adrian Dominican Sisters in Michigan, said he developed the guide to share “God’s gift of creation through prayer and liturgy.”

He also said he is hopeful that the guide — downloadable in English and Spanish at www.dominicancenter.org — will encourage more parishes to incorporate “green” themes into parish prayer life.

Featured image: Father John Grace, pastor of Immaculate Conception Church in Hampton, Virginia, stands among an array of solar panels the parish installed in 2019. The project was one of several the parish has undertaken in response to Pope Francis’ encyclical “Laudato Si’, on Care for our Common Home.” (CNS photo/courtesy Immaculate Conception Church)