Comboni Sister Maria De Coppi, a missioner with six decades of services in Mozambique, was killed by Islamic terrorists.

THE VATICAN — In his Angelus address of Sunday, Pope Francis honored an Italian missionary sister who was killed by Islamist terrorists in Mozambique. Speaking from the window of the Apostolic Palace on Sept. 11, the pope said: “In this moment of prayer, it is dear to me to remember Sister Maria De Coppi, Combonian missionary, killed in Chipene, Mozambique, where she served with love for almost 60 years.”

“May her witness give strength and courage to Christians and all the people of Mozambique.”

Sister Maria De Coppi was shot and killed last week as terrorists ransacked and burned the Catholic mission where she served in Mozambique’s Diocese of Nacala.

The Italian priests and sisters who served at the mission were able to evacuate 68 students who were living at the mission before the church, boarding houses, rectory, and school were destroyed in the five-hour attack on the night of Sept. 6. 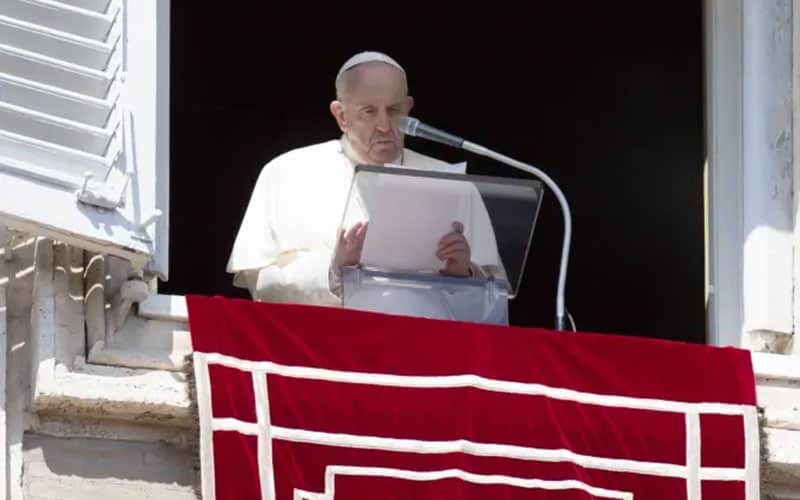 Pope Francis speaks at the Angelus address on March 20, 2022. During his address on September 11, 2022, the Holy Father expressed his sorrow at the death of 84-year-old Comboni Sister Maria De Coppi, killed days earlier in Mozambique. (ACI Africa, Vatican Media).

Sister De Coppi was about to flee with the other missionaries when she turned back out of concern for the 12 female students who had stayed behind at the mission, according to the pontifical charity Aid to the Church in Need.

The 84-year-old religious sister left a voicemail for her niece, Gabriella Bottani, shortly before her death, the Italian newspaper Corriere Della Sera reported.

In the voicemail, Sister De Coppi said that Al-Shabaab insurgents were close to the mission and the situation was “very tense.”

“It appears that they are armed, that they have already kidnapped people, killed someone,” she said. “Wherever they pass, they carry out massacres.”

Churches have been burnt, people beheaded, young girls kidnapped, and hundreds of thousands of people displaced by escalating extremist violence in Mozambique in recent years.

A missionary in Mozambique told Aid to the Church in Need that the local insurgents who have been targeting Christians in the region have ties to the Islamic State.

According to Corriere del Veneto, another Italian newspaper, Sister De Coppi’s last phone message included these words: “Here they shoot. See you in paradise. They are burning the house. If you don’t hear from me anymore, I take this opportunity to apologize for my shortcomings. And to tell you that I loved you very much. Remember me in prayer,” she asked, and added, “If the good Lord gives me the grace, I will protect you from there. I have forgiven those who will kill me. You do the same. A hug.”

During Holy Week in 2020, insurgents perpetrated attacks on seven towns and villages in northern Mozambique’s Cabo Delgado province, burning down a church on Good Friday and killing 52 young people who refused to join the terrorist group, according to the local bishop.

More than 1,000 people have been killed in attacks in Mozambique since 2017, according to the Center for Strategic and International Studies. Some of these attacks were claimed by the Islamic State, while others were carried out by the homegrown Ahlu Sunna Wal, an extremist militant group, locally known as Al-Shabaab, which has been kidnapping men and women.

Mozambique’s President Filipe Nyusi said that on Sept. 6, “As a result of terrorist attacks, six citizens were beheaded, three kidnapped, six terrorists were captured, and dozens of houses torched in the districts of Erati and Memba, Nampula province.”

Bishop Alberto Vera of Nacala said that the attackers “destroyed everything” at the Chipene mission.

“The attackers broke open the tabernacle and vandalized part of the sacristy, looking for whatever they could find — probably money,” he added.

Cardinal Matteo Zuppi, the president of the Italian bishops’ conference, paid tribute to Sister Maria, saying that her sacrifice “will be a seed of peace and reconciliation” in Mozambique.

“We cry for another sister who with simplicity, dedication, and silence offered her life for the love of the Gospel,” Zuppi said.

Featured image: Comboni Sister Maria De Coppi was killed during an attack by militants at a mission in the village of Chipene in the province of Nampula, Mozambique, during the night between Sept. 6-7, 2022. Sister De Coppi, who had served in Mozambique since 1963, is pictured during an interview Oct. 8, 2021, in Italy with La Tenda Tv Vittorio Veneto. (CNS photo/courtesy La Tenda Tv Vittorio Veneto)