The arid landscape near Kibwezi in southeastern Kenya leaves little doubt that climate change has gravely affected the people here.

“The hope was that this would become an agriculturally productive area, but it didn’t work out,” says Maryknoll Father Lance Nadeau, who served in Kenya for over 20 years and is now superior general of the Maryknoll Fathers and Brothers.

A generation ago, this swath of land between two sections of Tsavo National Park was envisioned as a region for pastoralist indigenous groups to settle, raise crops and livestock, and provide education for their children.

That dream crumbled before it could even begin as the changing climate made the hoped-for agricultural mecca an unattainable goal, Father Nadeau says.

Increasing temperatures and decreasing annual rainfall mean shorter growing seasons. They also lead to longer walks to graze and water livestock. Hundreds of naturally-fed watering holes that served as reservoirs for most of the year are now dry. In the area, water flows through the Galana River and its tributaries only in the rainiest of times. Since the autumn of 2020, with consecutive annual droughts severely impacting an estimated 20 million people across East Africa, the water level has been too low to fill agricultural diversion channels. Farmers whose lands are not adjacent to the river are left without a steady supply of water.

Local residents hold saplings of drought-resistant mukau trees as part of a project at the St. John the Baptist mission near Kibwezi in southeastern Kenya to plant mukau groves. These native mukau trees, which thrive in drylands, will provide needed shade, help with water and soil retention, and also eventually provide timber for sale and building projects. (Gregg Brekke/Kenya)

Despite these dire conditions, people in Kibwezi have been bolstered by a series of innovative projects, initiated a decade ago, that help residents of the Kibwezi farmlands survive and thrive. In partnership with the St. John the Baptist mission and its outstation chapels, the Maryknoll Fathers and Brothers have been helping residents with food assistance, livestock breeding, well drilling and water retention efforts.

Father Nadeau first traveled to the area in 2009 to meet the family of Dominic Mutunga, one of his students at Kenyatta University. At the time, Father Nadeau was serving as pastor of Christ the Teacher Catholic Chaplaincy Center, and Mutunga was chairman of its parish pastoral council. The Maryknoll priest had arrived in Kenya in 1999 and initially worked among the people living the slums of Nairobi. In 2001 he began his work at Kenyatta University while also over the years overseeing assistance programs, especially in northern Kenya on the border with Ethiopia and South Sudan. 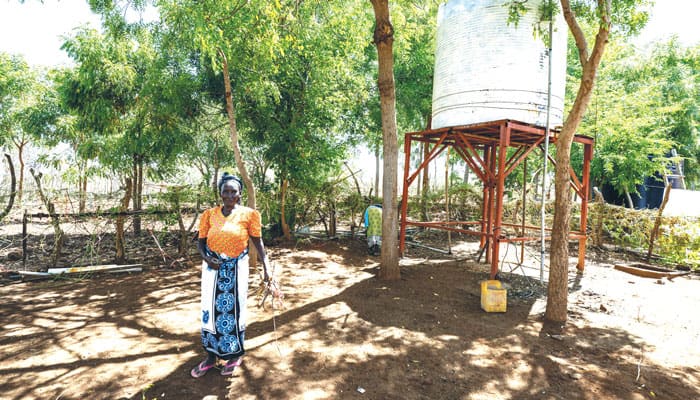 A woman at the St. John the Baptist mission stands near a water storage tank that is part of a Maryknoll project to drill wells in the drought-ravaged area of Kibwezi in Kenya. (Gregg Brekke/Kenya)

Through his work at Kenyatta, Father Nadeau got to know students such as Mutunga from these remote rural areas. He was “shocked” by the razor’s edge most people walked between survival and death.

The missioner was moved to act and to find ways to meet the people’s needs.

“I got involved in a number of projects — food assistance started in 2010 and water projects, livestock projects, reforestation projects began around 2012 and continue today,” he says. “There are eight wells and they’re adding another one soon. Hundreds and hundreds of goats are now at the various outstations. Agriculture turned out to be so unpredictable — or should I say so predictably disastrous — that the goats provided a way for people to make some money and buy food, and not rely on food assistance.”

Food assistance is part of the overall project, but is distributed on a food-for-work basis. People receiving allotments of corn or other food items help with one of the many tree planting, gardening or construction projects underway in the mission. The assistance is open to all, regardless of religious affiliation, and the projects — such as planting groves of drought-resistant mukau trees — provide much needed shade, water and soil retention along with the long-term prospect of timber sales. 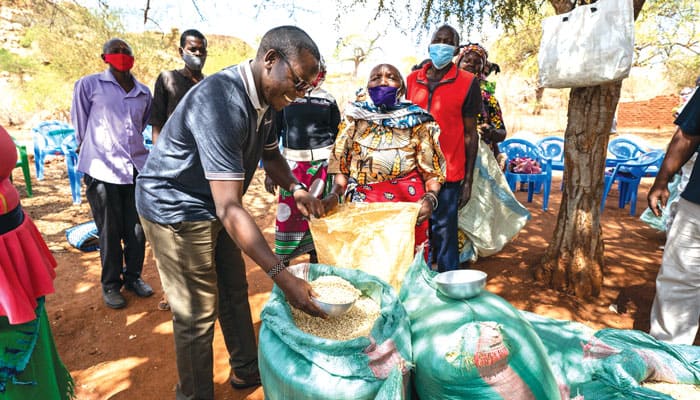 Dominic Mutunga, who connected Father Lance Nadeau to the needs of people in the Kibwezi area, helps distribute food at the Dunguni outstation of the St. John the Baptist mission. (Gregg Brekke/Kenya)

“Climate change has become a very discouraging reality,” said Mutunga as he toured the Kibwezi region in late 2021, visiting his family and the Maryknoll project sites (Father Nadeau’s student had gone on to join the Jesuits). “What gives me hope is that the people themselves are aware they also have a responsibility in this,” he continues, “from the smallest ways in which they can be part of this solution.”

Mutunga, who holds degrees in public health, said this work is not an exclusive effort of the people at the St. John the Baptist mission, but something that has a ripple effect. “One tree makes a difference and that goes on multiplying,” he said. “So there’s still immense hope.”

Providing water via wells — called “boreholes” locally — is an essential part of making the area sustainable for the pastoralist communities, helping to offset the loss of dried-up traditional watering holes. Father Nadeau says the wells themselves are also intended to be self-sustaining.

Each well is staffed by an attendant  who collects a small sum for each 20-liter (5-gallon) container filled with water, he says. The income pays the attendant and provides a small reserve for maintaining the pumping equipment and paying for electrical service — or, in many cases, providing solar panels. 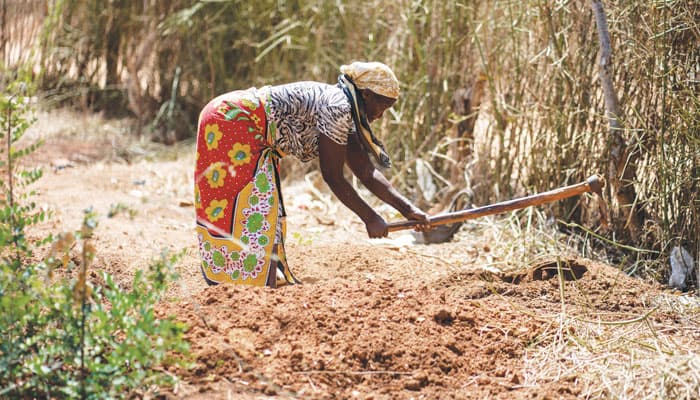 A woman tills the soil, preparing to plant corn on the grounds of the St. John the Baptist mission near Kibwezi, Kenya, where the Maryknoll Society funds a food and water project. (Gregg Brekke/Kenya)

Father Nadeau, who returned to the States in 2021 to assume the leadership of the Maryknoll Fathers and Brothers, has relied on the generosity of donors to build and expand these services, noting that the average cost is approximately $30,000 U.S. per well installation, which includes a solar power system.

The placement of the wells is strategic, he says. “We usually try to get them in an area where there’s a dispensary, a primary school, a secondary school, a church or a technical college so that the community can benefit from it, too.”

While not all 120,000 residents of the Kibwezi region are pastoralists, the majority of people nonetheless rely on the land for their livelihoods. Survival in such harsh conditions is a daunting prospect, and climate change is only making it harder, Father Nadeau says.

“These are tough people,” he says. “So many people have innate gifts, not only of intelligence but of resilience. Extended families, in small communities, pull together and work for the common good. So that, more than anything else, is what gives me hope: the grit or the survival instincts of the people that I’ve met, who can face unbelievable hardships and survive.”

Featured image: Volunteers at the St. Nicholas outstation near Kibwezi, in southeastern Kenya, help with food distribution as part of a Maryknoll feeding program. (Gregg Brekke/Kenya)