Maryknoll Father Vincent Capodanno, a chaplain who gave his life for others, is honored in memorial Masses in New York and Washington, D.C.

STATEN ISLAND, N.Y. (CNS) — On the 55th anniversary of his death in Vietnam, Maryknoll Father Vincent Capodanno was remembered at a Mass celebrated in his hometown in a chapel that bears his name.

More than 250 people filled the Father Capodanno Memorial Chapel at Fort Wadsworth in the Staten Island borough of New York to honor the chaplain’s selfless service and pray for his canonization.

The Mass took place just weeks after the chaplain’s sainthood cause gained public attention over a recommendation by a group of theological consultants to the Dicastery for the Causes of Saints at the Vatican that the cause be suspended.

Bishop Peter J. Byrne, an auxiliary bishop of New York, who celebrated the memorial Mass, said in his homily, that the recommendation by the theological consultants is a “pause” in a process that involves human beings evaluating information and considering how relevant the testimony of a potential saint’s life was to the time in which they lived.

“Ultimately, it is in God’s hands,” Bishop Byrne said.

“Father Capodanno gave his life in order to be sure his Marines were able to receive the sacraments,” he added at the Mass that drew Father Capodanno’s extended family, friends, military veterans, active duty service members, emergency responders and local officials. The bishop also pointed out that the suspension of the chaplain’s cause will be appealed by Archbishop Timothy P. Broglio of the Archdiocese for the Military Services.

Father Capodanno, known as the “Grunt Padre”, was serving a second tour of duty in Vietnam as a Navy chaplain ministering to Marines when he was wounded during a North Vietnamese ambush in the Que Son Valley Sept. 4, 1967. 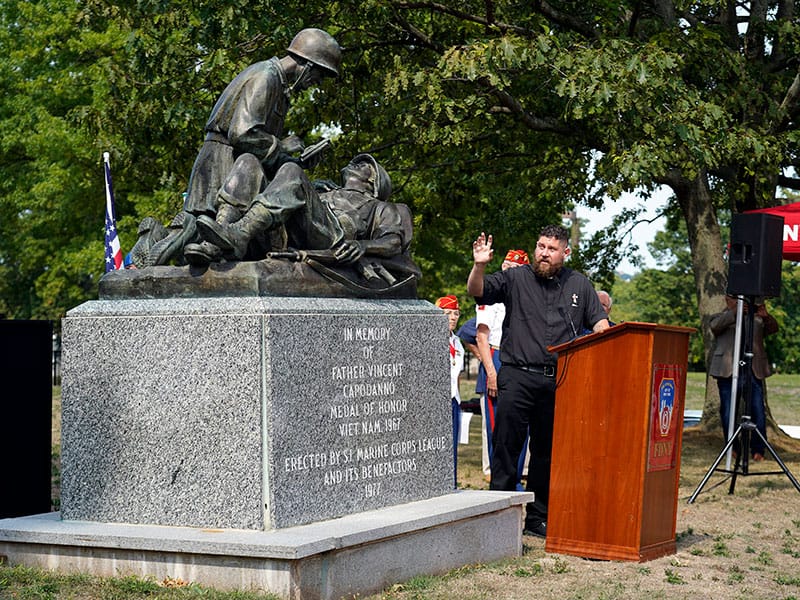 Despite his injuries, he went to the aid of a fellow corpsman who was pinned down by an enemy machine gunner. While he administered medical and spiritual attention, the unarmed chaplain was struck by 27 bullets and died at age 38.

He was posthumously awarded the Medal of Honor in 1969, in addition to the Purple Heart, Navy Bronze Star and the Vietnamese Cross of Gallantry with Silver Star.

Father Capodanno was born in New York in 1929, the 10th child of Italian immigrants. He was ordained a Maryknoll missioner in 1958 and served in Taiwan and Hong Kong before asking permission from his religious superiors to join the Navy Chaplain Corps. He was commissioned as a lieutenant in the spring of 1966 and went to Vietnam.

His sainthood cause was officially opened in 2002 and he was declared a Servant of God in 2006.

In 2013, Archbishop Broglio presided over the formal renewal of the opening of the cause. (Editors’ note: It is a common occurrence for a canonization cause to be opened or spearheaded by the diocese for which the person being considered served. The cause of Father Capodanno is being led by the Archdiocese for the Military Services, as he was killed while serving as one of its chaplains.) Archbishop Broglio formally closed the archdiocesan phase of the cause in May 2017 and the findings of the local tribunal were sent to the (then-named) Congregation for Saints’ Causes for review. 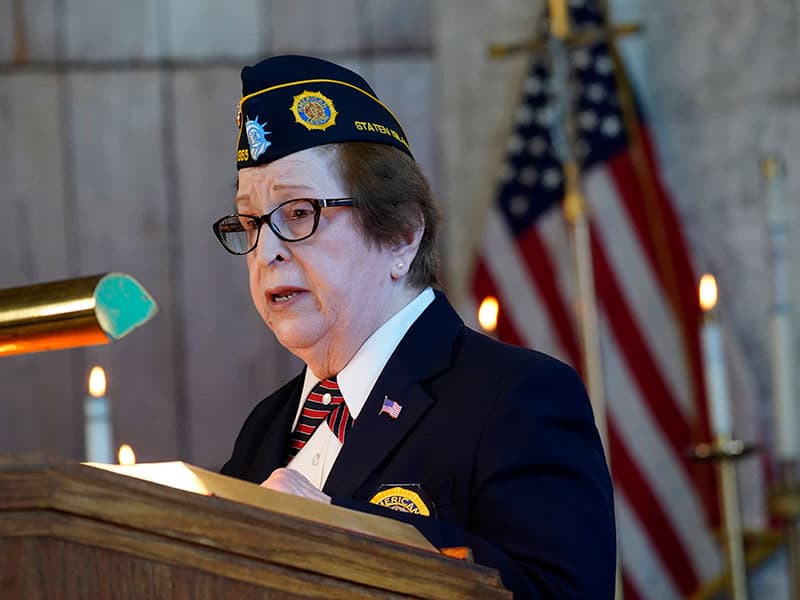 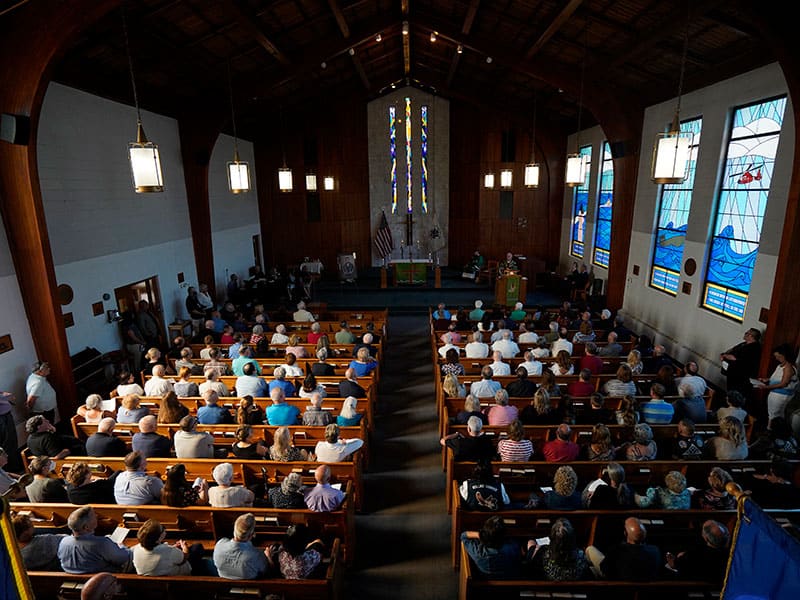 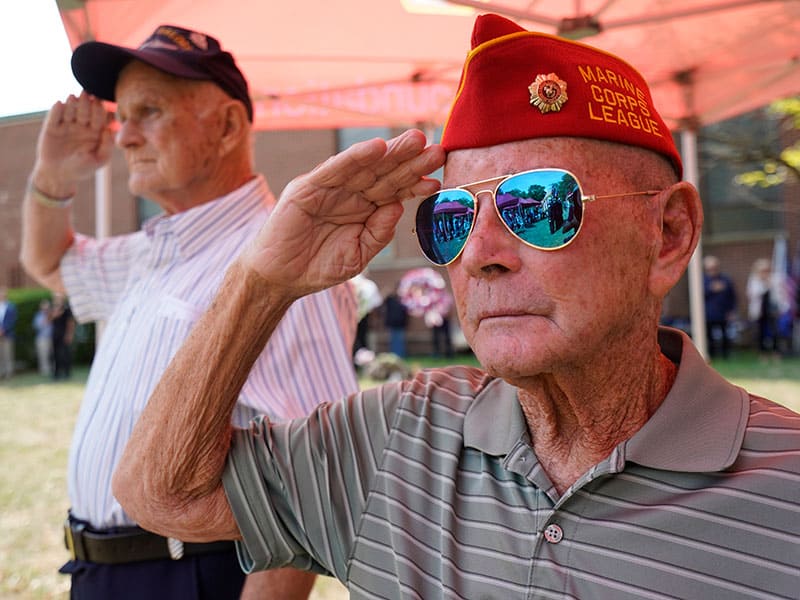 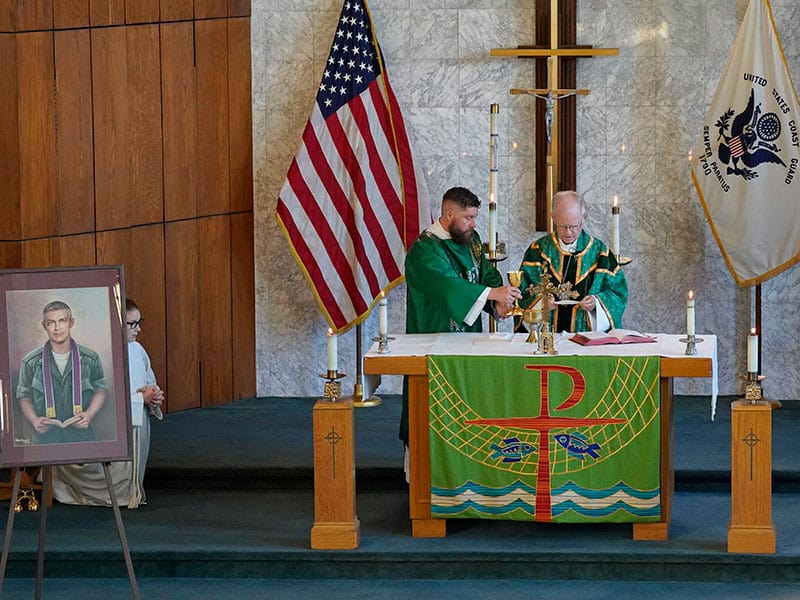 The positio — a formal brief arguing for canonization — was submitted in May 2020.

During a veterans’ memorial ceremony after Mass on the lawn adjacent to the chapel, Al Lambert, a cousin of Father Capodanno, urged participants to pray and stay focused on the cause. He paraphrased Father Capodanno s last words, “Be calm soldier. Remember today God is here with us.”

Mary Preece of the Archdiocese for the Military Services, vice-postulator of the chaplain’s cause, said news of the theological consultants’ response the chaplain’s sainthood cause has boosted interest in the Father Vincent Capodanno Guild, an association established in 2013 to promote his canonization.

She also noted that people have recently come out of the woodwork with stories about Father Capodanno.

“We now have a bankable miracle for the next step in the process,” Preece said, noting that the case of a woman cured of multiple sclerosis through the chaplain’s intervention has been fully investigated and determined to be miraculous.

At a Sept. 6 Mass in Washington at the Basilica of the National Shrine of the Immaculate Conception, Archbishop Broglio did not directly address the possibility of a suspended cause for Father Capodanno.

In his homily, he said Father Capodanno’s “witness draws us here this evening.”

“But we can think of other Christians, as well,” he said, naming Servant of God Father Emil Kapaun, who died in a prisoner of war camp in the Korean War, and St. Maximilian Kolbe, a priest who volunteered to take the place of a young husband and father and die at the hands of the Nazis in the Auschwitz death camp.

“We might have gathered with thoughts of a beatification; however, that is not the case,” he said at the beginning of the Mass, attended by Gen. Mark Milley, chairman of the Joint Chiefs of Staff, who is Catholic.

The archbishop said whatever God has in store in this situation “is better than whatever we can plan or imagine,” adding that many have already “been enriched by the experience of the Servant of God.”

Contributing to this story was Mark Pattison in Washington.