Religious leaders in South Sudan start a peace campaign to ensure refugees can return to a peaceful environment.

KAKUMA REFUGEE CAMP, Kenya (CNS) — Sitting on a mat with her four children outside her tent in this United Nations camp, Achol Dut, a South Sudanese refugee, said she wants to return to her country and rebuild her life. Her country’s obstacles to peace and stability have prevented her move.

“Life is difficult in a refugee camp,” said the 42-year-old mother of six. “Our children spend days without meals, and access to medicines and education is hard.”

Dut fled her village in South Sudan’s Jonglei state in December 2017 after government soldiers attacked their village in the middle of the night, killing residents, abducting several people, burning homes, and destroying schools, churches and hospitals.

“I lost my husband and two other children during the attack,” said Dut, noting that she moved to Kenya to save her remaining children from additional attacks. “I had to walk for five days to Kakuma without water and food, and we could sleep in the bush and sometimes in churches and schools.”

She is among thousands of refugees who want to return to their country and rebuild their lives. Their desire to return home has prompted religious leaders in South Sudan to start a peace campaign to ensure refugees can return to a peaceful environment.

The campaign brings together local leaders, government officials and leaders from all ethnic groups who, after the training by religious facilitators, are supposed to spearhead peaceful dialogue and reconciliation in their areas to ensure residents live in peace, love each other and promote social cohesion and interdependence among different ethnic groups.

South Sudan’s more than 11 million people include more than 60 ethnic groups, although more than half of the population is either Dinka or Nuer. Residents are divided along ethnic lines, and the country descended into civil war in 2013 after President Salva Kiir, a Dinka, fired then-Vice President Riek Machar, a Nuer.

In September 2018, South Sudan’s warring factions signed a peace deal to end the five-year civil war. Under the deal, Machar was appointed as Kiir’s deputy, and the two leaders agreed to share the leadership positions in the newly created government. However, the agreement has remained extremely fragile over a lack of trust, sharing of power, and a lack of political will — resulting in a new wave of attacks.

More than 400,000 people have been killed and an estimated 4 million displaced since 2013. With more than 2 million South Sudanese refugees across East and Central Africa, refugee concerns are increasingly coming to the fore of South Sudan’s peace process. People want to return to their country, and the church leaders believe they can only return to a peaceful country. 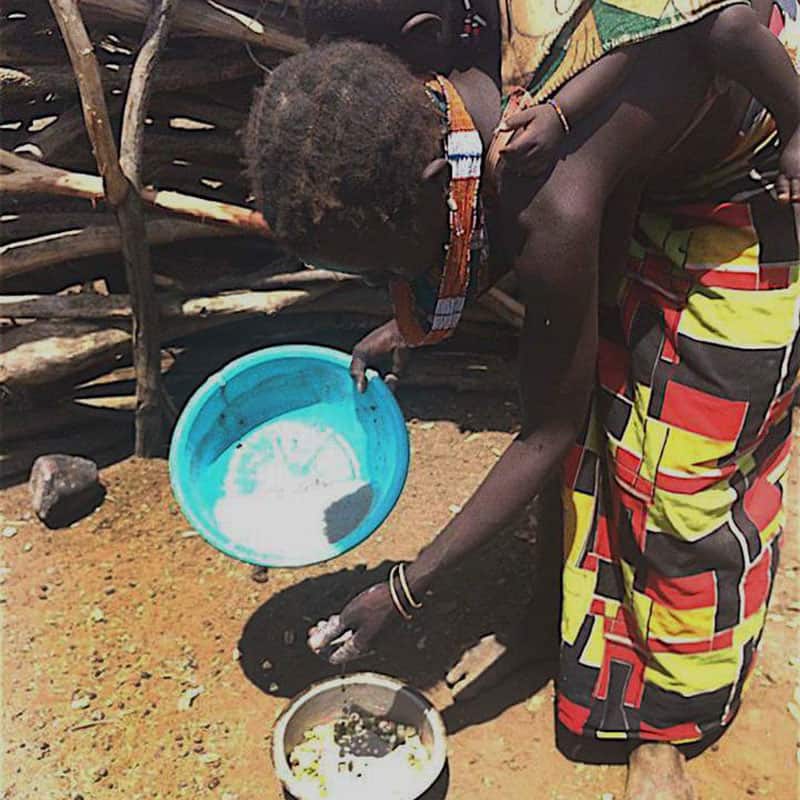 A South Sudanese woman carrying her daughter checks her flour before preparing a meal in 2017 at a camp for internally displaced people in southeastern Sudan, where the civil war has claimed hundreds of lives in recent years. (CNS photo/Tonny Onyulo)

“We want to ensure peace prevails in our country and people can reconcile and live with each other like brothers and sisters,” said Kuok Deng Kuok, a catechist in South Sudan’s Wau Diocese. “When we have a peaceful environment, our brothers and sisters who fled the war will be able to return and start a new life without worry.”

Kuok said church leaders are encouraging elders and leaders in every village to carry out door-to-door peace campaigns to urge residents to desist from revenge killings and road ambushes.

“We understand that for our people to return from neighboring countries, we must permanently resolve the issues that made them flee. We must assure them of their safety and ensure they have a livelihood when they return,” he said.

Bishop Christian Carlassare of Rumbek said church officials were working with leaders of different regions across the country to promote peace and ensure peace agreements signed by Machar and Kiir are implemented, so that refugees can return home.

Bishop Carlassare said officials in his diocese have been touring villages and homes to spread messages of peace and reconciliation through the Gospel, to ensure members of the warring tribes come together and forgive each other.

Diocesan officials also have been preaching love and ethnic tolerance. They have reached out to residents traumatized by rape and other violence to counsel them so that they can heal and not seek revenge.

“We have urged residents from different tribes to forgive themselves and build peace in their lives. The people of this country have no option but to reconcile and live in peace. We need each other, and we should not attack one another,” said Bishop Carlassare.

“Many refugees living outside the country are willing to return and start life again, but they don’t know how they should return. Those who have dared to return have met a lot of challenges on their way,” he said. “Some have been killed or kidnapped by either soldiers or rebels, and others have been denied entry into the country. Such threats have discouraged the remaining refugees.”

Bishop Sakor Eyobo called on international partners to support the government in ensuring refugees return to the country.

“The government should be ready to help refugees who want to return home by building them houses and ensuring schools and health centers are functional,” he said. “When they return, they will also need food, water, clothes, and other essential items.”

Featured image: South Sudanese youths pose at Palabek refugee settlement in northern Uganda April 13, 2022. Many refugees at the camp, including children, desire to return to their country, but South Sudan’s security situation has prevented them from doing so. (CNS photo/Tonny Onyulo)