Pope: Wise Elders Are “a Light for Others”
By Catholic News Service
Aug 24, 2022
News
ShareTweet it!LinkedinEmailPrint

Pope Francis concludes his catechesis on old age, teaching that the wisdom of elders is a blessing for both old and young.

VATICAN CITY (CNS) — Elderly men and women are called to pass on their wisdom and shine a light toward a better tomorrow for future generations, Pope Francis said.

As one approaches the final leg of their mortal journey, little details, such as “a caress, a smile, a gesture, an appreciated effort, an unexpected surprise, a hospitable cheerfulness, a faithful bond become more acute,” and what is most essential in life “becomes definitively clear to us,” the pope said Aug. 24 during his weekly general audience.

“This wisdom of old age is the place of our gestation, which illuminates the lives of children, of young people, of adults, of the entire community. We, the elderly should be this for others; a light for others,” he said.

In his catechesis, the final in a series of talks on old age, the pope reflected on the recent feast of the Assumption, which he said served as a reminder that “the destination is heaven.”

For Christians, he explained, death is “a little like a second birth.” 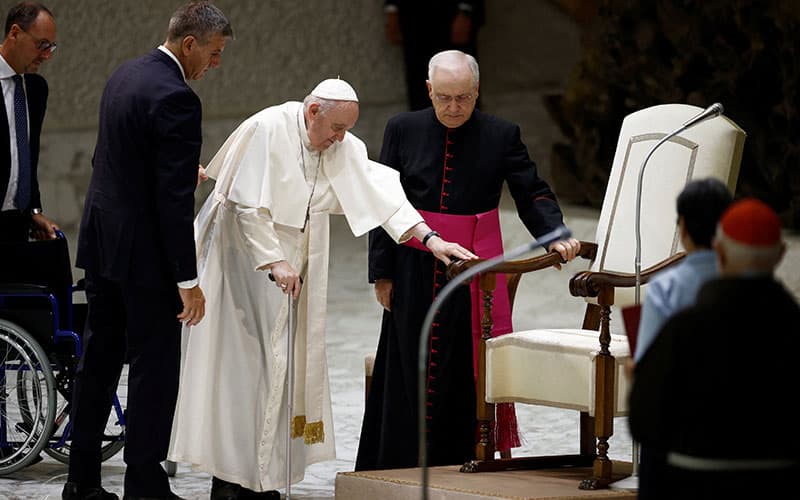 Pope Francis is assisted as he arrives at his chair during the weekly general audience at the Vatican Aug. 24, 2022. (CNS photo/Guglielmo Mangiapane, Reuters)

Jesus’ Resurrection from the dead, the pope continued, and his subsequent appearance to his disciples are a source of hope that allows Christians to see death not as an end, but as “a kind of step toward the encounter with Jesus, who is waiting for me to bring me to (God).”

“The Risen One lives in God’s world, where there is a place for everyone, where a new earth is being formed, and the heavenly city, man’s final dwelling place, is being built,” he said. A life lived according to the Gospel, he added, prepares Christians for the passage into eternal life and “puts us in tune with the unprecedented destination of the life we sow.”

“Our whole life appears like a seed that will have to be buried so that its flower and its fruit can be born. It will be born, along with everything else in the world. Not without labor pains, not without pain, but it will be born. And the life of the risen body will be a hundred and a thousand times more alive than we have tasted it on this earth,” the pope said.

Pope Francis called on all Christians to “hope for this fullness of life that awaits us all,” that is not “a bored expectation” but rather “an expectation with eager anticipation.”

During last week’s audience, dedicated to the same series on old age, Pope Francis said the vocation for every older man and woman is to bear witness to the faith and to the wisdom acquired over the years.

“The witness of the elderly is credible to children. Young people and adults are not capable of bearing witness in such an authentic, tender, poignant way, as elderly people can,” the pope said. He said it is also very compelling when the elderly bless life as it comes their way and show no resentment or bitterness as time marches on and death nears.

“The witness of the elderly unites the generations of life, the same with the dimensions of time: past, present and future, for they are not only the memory, they are the present as well as the promise,” the pope said.

“It is painful and harmful to see that the ages of life are conceived of as separate worlds, in competition among themselves, each one seeking to live at the expense of the other. This is not right,” he said. An alliance between the elderly and young people “will save the human family,” he continued. “There is a future where children, where young people speak with the elderly. If this dialogue does not take place between the elderly and the young, the future cannot be clearly seen.”

Humanity, even with all its progress, still seems “to be an adolescent born yesterday,” which needs “to retrieve the grace of an old age that holds firmly to the horizon of our destination.”