MOGADISHU, Somalia (ACI Africa) — Pope Francis has drawn the attention of the international community to “the serious humanitarian crisis” facing the people of Somalia and the horn of Africa nations.

Speaking after leading the Angelus prayer on Sunday, August 14 at the Vatican’s St. Peter’s Square, the Holy Father said the people in the affected African countries are in danger of death due to famine caused by drought.

“I wish to draw your attention to the serious humanitarian crisis affecting Somalia and parts of neighboring countries. The people of this region, already living in very precarious conditions, are now in mortal danger because of drought,” Pope Francis said.

He advocated for support from across the globe, saying, “I hope that international solidarity can respond effectively to this emergency.”

“Unfortunately, war diverts attention and resources, but these are the goals that demand the greatest commitment: the fight against hunger, health, education,” the Holy Father added.

Somalia and the Horn of Africa countries including Kenya and Ethiopia are experiencing “a historic drought,” the worst in more than four decades, the United Nations (UN) has reported.

In the August 11 report, Africanews.com has quoted the United Nations High Commissioner for Refugee (UNHCR) and the Norwegian Refugee Council (NRC) as saying that the situation of drought in Somalia has displaced up to one million people, with more than 755,000 of them remaining “within the country’s borders” and the others having “fled abroad.”

The humanitarian crisis in Somalia follows “four failed rainy seasons that have decimated crops and livestock,” the report indicates.

Earlier this year, the leadership of the overseas development agency of the Catholic Bishops of Ireland, Trócaire in Somalia, called for “drastic action” to provide reprieve to the people in drought-stricken Horn of Africa nation. In a February 11 report, the Country Director of Trócaire in Somalia, Paul Healy, said the effects of the drought were “truly devastating.” 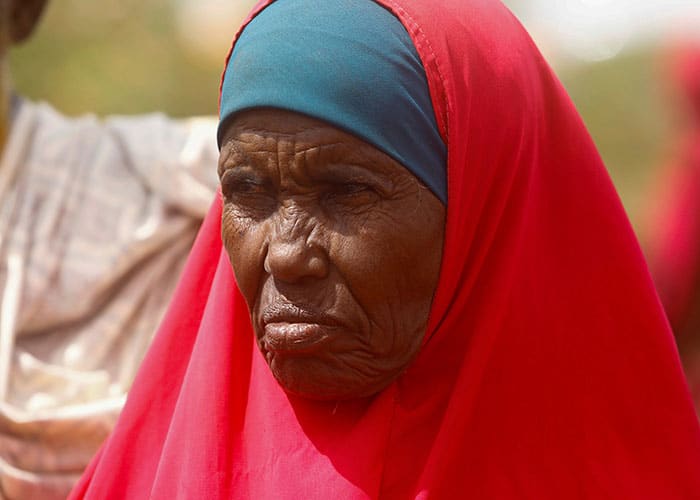 A displaced Somali woman waits for relief goods at a camp during a severe drought near Dollow May 26, 2022. (CNS photo/Feisal Omar, Reuters)

“Severe water shortages have heightened the risk of disease outbreaks, with people and animals now competing for untreated water from hand-dug shallow wells and dwindling rivers. Cases of acute watery diarrhea/cholera, and outbreaks of measles, are on the rise in multiple drought-affected locations,” Healy said.

The Trócaire official made reference to witness accounts, saying that there were Internally Displaced Persons (IDPs) feeding on animal carcasses at night, a practice that was worsening severe risk of disease.

“These are times of great hunger. Children are the most vulnerable. There is limited access to food, and food prices are rising, predisposing families and their children to severe malnutrition,” the District Commissioner of Luuq District in the Southwestern Gedo Province of Somalia was quoted as saying.

In the February 11 report, Fatuma Ganun Mohamed, an IDP, was quoted as saying that the drought “took our livestock; we had to leave behind our rural house and the little we had to get something to eat for our children.”

“Living in the camp is very difficult, especially for the children, who are very thin and sick most of the time,” Ms. Mohamed said.

In April, Healey said that extreme hunger was ravaging various parts of Somalia’s Gedo region and warned that the situation, which was occasioned by climate change, was likely to worsen if urgent action would not be taken.

“Severe hunger has taken hold and it will get much worse in the coming months unless urgent action is taken,” Healy said in the April 7 report. He made reference to the Dollow referral health center in Gedo where he said the 110 babies being delivered and discharged within 24 hours on average makes the hunger situation dire as these children are vulnerable.

“These are times of great hunger. Children are the most vulnerable. There is limited access to food, and food prices are rising, predisposing families and their children to severe malnutrition,” Healy said in the report.

He continued, “The failure of three successive rainy seasons has destroyed livelihoods and forced families to leave their homes in search of food and water.”

Healey also said that the ongoing war between Russia and Ukraine had worsened the situation as the flow of raw materials to the Horn of Africa countries had been disrupted.

“Now, staple foods such as wheat are becoming increasingly scarce and expensive as trade routes from Ukraine and Russia are severely disrupted. Many countries in the region usually import 60-80 per cent of their wheat from Ukraine,” Healy reported. “With these imports disrupted, the price of bread and other staple foods is rapidly rising, affecting the poorest families most of all,” he said, adding that the number of Somalians in dire need of humanitarian assistance was almost up to half of the total population of the Horn of Africa nation.

Last month, Healy reported there was “severe malnutrition” in parts of Somalia’s Gedo region and that the situation was to “get much worse” if action was not to be taken urgently.

“Severe malnutrition has taken hold in Somalia and it will get much worse in the coming months unless urgent action is taken,” he was quoted as saying in a July 11 report. Healy added, “Since January, at least 448 children have died from severe acute malnutrition.”

Featured image: A displaced Somali woman feeds her child in a shelter during a severe drought near Dollow May 26, 2022. During his Angelus address Aug. 14, Pope Francis called for international solidarity in helping the people of Somalia, who “find themselves in mortal danger due to drought.” (CNS photo/Feisal Omar, Reuters)