WASHINGTON (CNS) — Some border residents and organizations are speaking out against the Biden administration after the U.S. Department of Homeland Security revealed plans to fill in gaps of a border wall to keep migrants out near Yuma, Arizona.

“It’s a shame that Biden has continued to carry out the worst of Trump’s immigration policies,” said the organization RAICES Texas in a July 29 tweet.

DHS announced July 28 that it had approved the construction, saying it was necessary to protect migrants illegally crossing into the country near a dam and who were getting hurt.

Secretary of Homeland Security Alejandro N. Mayorkas in the announcement said U.S. Customs and Border Protection would take on the project to close four gaps along an incomplete border barrier “to address operational impacts, as well as immediate life and safety risks.”

But Republican opponents said they believed it was a political ploy to help Democratic U.S. Sen. Mark Kelly of Arizona seem tough on immigration, helping him win in November’s midterm elections.

Mayorkas in his statement said that the “area presents safety and life hazard risks for migrants attempting to cross into the United States where there is a risk of drownings and injuries from falls. This area also poses a life and safety risk to first responders and agents responding to incidents in this area.” 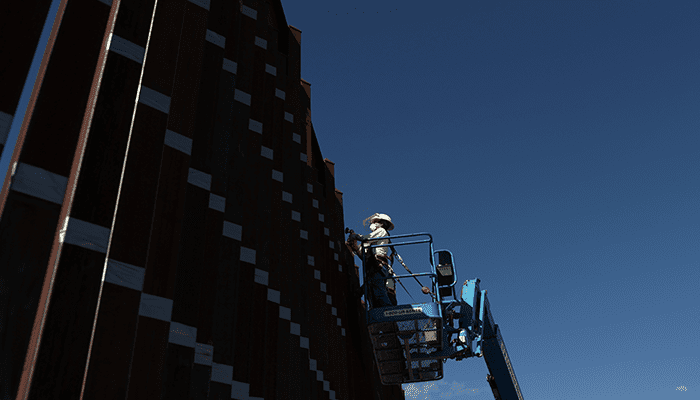 The administration received similar blowback when it announced in early July it was doing the same in San Diego at a location called Friendship Park, where people, including many families separated by the border, used to gather before the coronavirus pandemic to touch hands and sometimes hug.

The Biden administration said it was planning to build two 30-foot-high barriers there, also citing safety concerns for migrants and government staff.

“Sorry, not buying it,” said John Fanestil of the Friends of Friendship Park during an early July Zoom meeting encouraging people to protest construction of the wall.

“If they build these walls they’re desecrating this landmark location,” said Fanestil. “It is arguably the most historic and culturally significant location on the border.”