Pope Francis tells European youth to “make noise” and if people don’t listen to them “shout even louder.”

VATICAN CITY (CNS) — Young Europeans must be a sign of unity and inclusion to counter today’s culture that seeks to divide humanity through violence and indifference, Pope Francis said.

In a message to participants at a European youth conference, the pope encouraged young people to not “be drawn into shortsighted ideologies that want to show others, those who are different from ourselves, as enemies.”

“Be in solidarity with everyone, not only with those who look like us, or give off an image of success, but with those who suffer, whatever their nationality or social status,” he wrote in the message which was released by the Vatican July 11.

Sponsored by the European Union, the July 11-13 EU Youth Conference gathers young people from across Europe to discuss issues such as sustainable development, education and the environment.

In his message, the pope said that young people in Europe today are “less ideologized,” which makes them capable of transforming “the ‘old continent’ into a ‘new continent.'”

“As young Europeans, you have an important mission,” the pope said. “If in the past your ancestors went to other continents, not always for noble interests, it is now up to you to present the world with a new face of Europe.”

Young people, he said, must make their “voices heard” by older generations, and “if they do not listen to you, shout even louder, make noise; you have every right to have your say on what concerns your future.”

Reflecting on his Global Compact on Education, an initiative he launched in 2019, the pope said that among its proposals is the call for young people to be witnesses to “the value of inclusion.”

Students who study abroad, for example, are proof that the encounter between different people helps one “to have a broad outlook in order to be open up to others, and not discriminating against anyone, for any reason.”

Education, he continued, should be “based not on competitiveness but on solidarity,” so young people should not aspire to “enter elite educational environments, where only people with lots of money can be accepted.”

“Such institutions often have an interest in maintaining the status quo, in training people to ensure that the system works the way it is,” he said. “Rather, those schools that combine educational quality with service to others should be valued, since the purpose of education is personal growth directed toward the common good.” 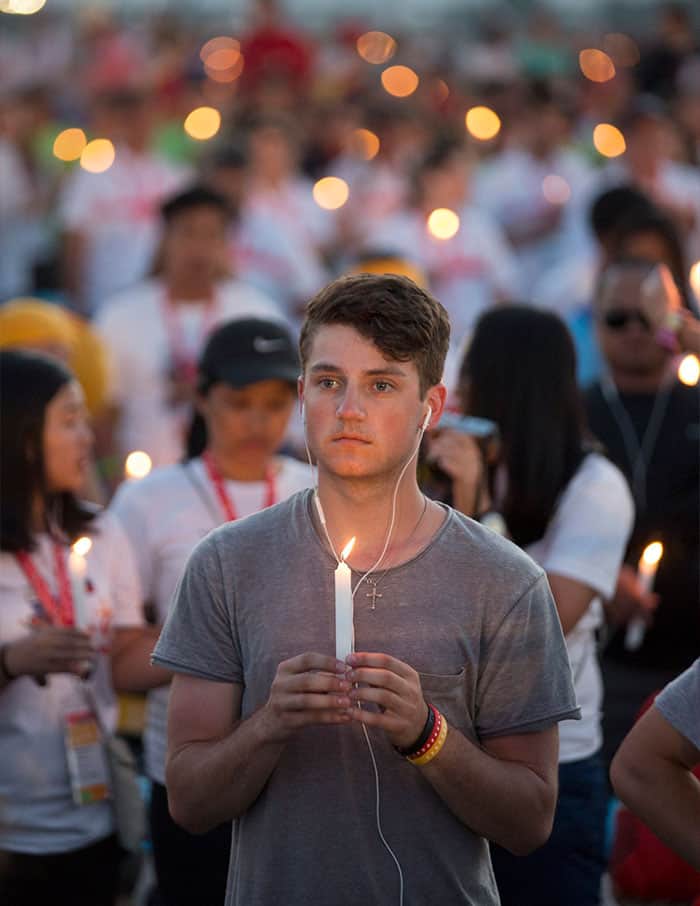 World Youth Day pilgrims hold candles during a prayer vigil with Pope Francis in Krakow, Poland, in this July 30, 2016, file photo. In a July 11 message to young people attending the “EU Youth Conference” in Prague, the pope said young men and women in Europe must look beyond “short-sighted ideologies” that are prevalent in today’s world. (CNS photo/Jaclyn Lippelmann, Catholic Standard)

Pope Francis also called on young Europeans to take the lead in protecting the environment and to resist the temptations “of a life of luxury reserved for a small slice of the world” that continuously exploits the world’s resources in a “self-destructive trend.”

“May you aspire to a life of dignity and sobriety, without luxury and waste, so that everyone in our world can enjoy a dignified existence,” the pope wrote. “There is an urgent need to reduce the consumption not only of fossil fuels but also of so many superfluous things.”

The need for solidarity and fraternity, he continued, is also evident given the “numerous conflicts taking place in different regions of the world,” especially in Ukraine where “a senseless war is being fought.”

The pope renewed his call for an end to the war in which, “as usual, a few powerful people decide and send thousands of young people to fight and die.”

He also recalled the example of Blessed Franz Jägerstätter, a Catholic Austrian farmer martyred by the Nazis for his stance as a conscientious objector, and urged young Europeans to learn from his example.

Like German Lutheran theologian Dietrich Bonhoeffer, Blessed Jägerstätter refused to swear allegiance to Adolf Hitler and “preferred to be killed than to kill” in a war he considered “totally unjustified.”

“If all the young men called to arms had done as he did, Hitler would not have been able to carry out his diabolical plans. To triumph, evil needs accomplices,” the pope said.

Pope Francis called on the young conference participants to look to the future and encouraged them to seek “the real meaning of your life, where you come from and where you are going, and the truth, because we cannot live authentically if we do not seek the truth.”

“Walk with your feet firmly planted on the earth, but with a broad gaze, open to the horizon, open to the sky,” the pope said.

Featured image: Young people walk near the Guggenheim Museum in Bilbao, Spain, in this June 17, 2022, file photo. In a July 11 message to young people attending the “EU Youth Conference” in Prague, Pope Francis said young men and women in Europe must look beyond “short-sighted ideologies” that are prevalent in today’s world. (CNS photo/Vincent West, Reuters)