Pope Francis blessed the archbishops’ palliums on the Feast of Saints Peter and Paul while emphasizing the Church’s call to inclusive mission.

VATICAN CITY (CNS) — Like Sts. Peter and Paul, the church must go out to evangelize and not be bound by the chains of routine and spiritual mediocrity that stifles the Gospel message, Pope Francis said. At times, Christians may be overcome by laziness and “prefer to sit and contemplate the few sure things that we possess, rather than getting up and looking to new horizons, toward the open sea,” the pope said during his homily at Mass for the feast of Sts. Peter and Paul June 29, traditionally known as the Pallium Mass.

Nevertheless, the upcoming Synod of Bishops on synodality is a call for the church not to be “turned in on itself, but capable of pressing forward, leaving behind its own prisons and setting out to meet the world,” the pope said.

Christians are called to be a “church that is free and humble, that ‘gets up quickly’ and does not temporize or dillydally before the challenges of the present time; a church that does not linger in its sacred precincts, but is driven by enthusiasm for the preaching of the Gospel and the desire to encounter and accept everyone,” he said.

The feast day celebration in St. Peter’s Basilica included the traditional blessing of the pallium, the woolen band that the heads of archdioceses wear around their shoulders over their Mass vestments.

The pallium symbolizes an archbishop’s unity with the pope and his authority and responsibility to care for the flock the pope entrusted to him. The pope blessed the palliums after they were brought up from the crypt above the tomb of St. Peter.

According to the Vatican, 44 archbishops from 32 countries who were named over the past 12 months were to receive the palliums, including: U.S. Archbishop Shelton J. Fabre of Louisville; Mexican Archbishop Jorge Patrón Wong of Jalapa; Irish Archbishop Francis Duffy of Tuam; Scottish Archbishop William Nolan of Glasgow; and French Archbishop Laurent Ulrich of Paris.

As has become standard practice, Pope Francis did not confer the pallium on new archbishops during the liturgy, but rather, blessed the palliums after they had been brought up from the crypt above the tomb of St. Peter.

As each archbishop approached him by the altar, the pope handed each one a small wooden box tied with a thin gold ribbon. The actual imposition of the woolen band was to take place in the archbishop’s archdiocese in the presence of his faithful and bishops from neighboring dioceses.

U.S. House Speaker Nancy Pelosi and her husband, Paul, were among those present at the Mass.

In his homily, the pope reflected on the day’s first reading from the Acts of the Apostles, which recounted Peter’s arrest by King Herod. 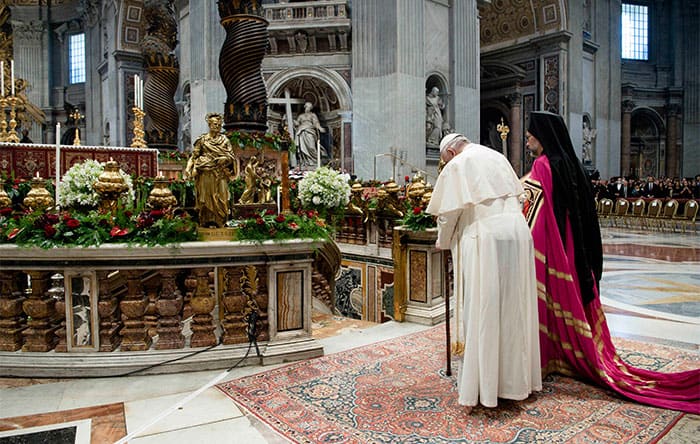 Pope Francis and Orthodox Archbishop Job of Telmessos, head a delegation from the Ecumenical Patriarchate of Constantinople, pray in front of the tomb of St. Peter in St. Peter’s Basilica at the Vatican on the feast of Sts. Peter and Paul, June 29, 2022. (CNS photo/Vatican Media)

Just like Peter, who was imprisoned and released from his chains by an angel, Christians are also called “to get up quickly, to enter into the mystery of the resurrection, and to let the Lord guide us along the paths that he wishes to point out to us.”

However, he added, “at times, as a church, we are overcome by laziness; we prefer to sit and contemplate the few sure things that we possess, rather than getting up and looking to new horizons, toward the open sea. Often, we are like Peter in chains, imprisoned by our habits, fearful of change and bound to the chains of our routine.”

Instead, the pope continued, the church is called to be “without chains and walls,” where everyone “can feel welcomed and accompanied, one where listening, dialogue and participation are cultivated under the sole authority of the Holy Spirit.”

Departing from his prepared remarks, the pope emphasized the need for the church to welcome “the blind, the deaf, the lame, the sick, the just, the sinner; everyone.”

“Everyone, everyone! This word of the Lord must resound in the mind and in the heart,” he said. “In the church, there is room for everyone! And many times, we become a church of open doors but to bid farewell to people, to condemn people.”

“Yesterday,” he said addressing the archbishops, “one of you told me that for the church, this isn’t a time to say farewell, it’s a time of welcome. If they haven’t come to the banquet, go out to the street,” he added.

To become a more “humane, just and solidary” church, Pope Francis said Christians must avoid retreating “into our ecclesial circles and remain pinned to some of our fruitless debates,” and instead help each other become the “leaven in the dough of this world.”

Speaking off the cuff, the pope warned of the dangers of “falling into clericalism.”

“Clericalism is a perversion; the minister who behaves in a clerical manner has taken a wrong path. Clerical laity are even worse. We must be attentive to this perversion of clericalism,” he said.

Addressing the archbishops appointed over the past year, Pope Francis encouraged them to be “vigilant sentinels” over their flock and to “‘fight the good fight,’ never alone, but together with all the holy and faithful people of God.”

“As good shepherds, you must be in front of the people, in the midst of the people and behind the people,” the pope said, “but always with the holy faithful people of God.”

Keeping with a long tradition, a delegation from the Ecumenical Patriarchate of Constantinople, led by Orthodox Archbishop Job of Telmessos, attended the Mass, as well as choir of the Orthodox Patriarchate of Georgia.

Due to his knee pain, the pope was unable to descend the stairs below the main altar to pray at St. Peter’s tomb. Instead, the pope and the Orthodox archbishop remained above the steps and bowed their heads in prayer.

Featured image: Pope Francis shakes the hand of Archbishop Luis Javier Argüello Garcia of Valladolid, Spain, after handing him a box containing a pallium, a woolen stole worn around the shoulders, at the end of a Mass in St. Peter’s Basilica at the Vatican June 29, 2022, the feast of Sts. Peter and Paul. (CNS photo/Vatican Media)