Pope Francis says Christians must not only to give alms to the poor but should truly empathize with them.

VATICAN CITY (CNS) — Christians are called to follow the example of the good Samaritan and not just look with compassion at those who suffer, but also draw near to them, Pope Francis said.

Like the priest and the Levite in Jesus’ parable, who pass by the injured man along the road and look the other way, Christians can sometimes be tempted to “take refuge behind dogmatisms to defend themselves from reality,” the pope said July 10 during his Sunday Angelus address.

Before praying the Angelus prayer with pilgrims gathered in St. Peter’s Square, the pope reflected on the Sunday Gospel reading from St. Luke.

The pope noted that St. Luke specifies the Samaritan was on a journey, meaning that “even though he had his own plans,” he did not “come up with an excuse” to not help the injured man.

“Let us think about this,” the pope said. “Isn’t the Lord teaching us to do just that? To look off into the distance, to our final destination, while paying close attention to the steps to take here and now in order to get there.” 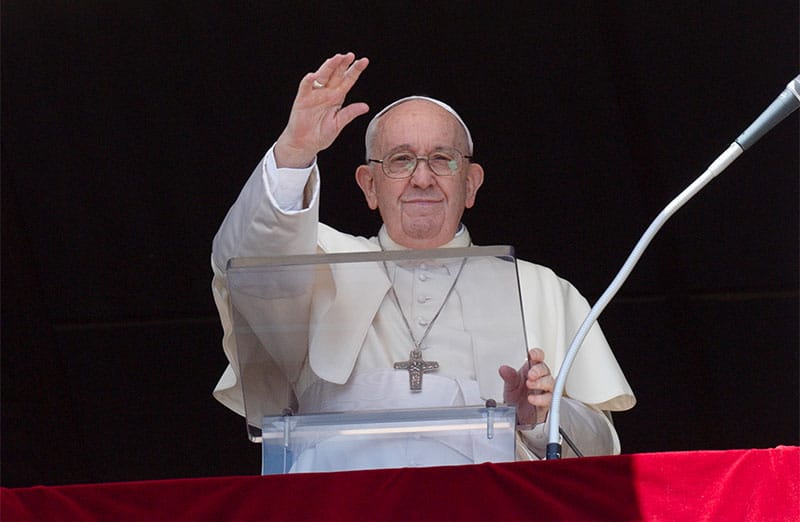 Pope Francis greets the crowd as he leads the Angelus from the window of his studio overlooking St. Peter’s Square at the Vatican July 10, 2022. In his remarks the pope said the parable of the good Samaritan is a call for Christians to “have compassion on those whom we encounter along the way, above all on those who suffer and are in need.” (CNS photo/Vatican Media)

Those who truly follow in Jesus’ footsteps, he continued, learn “to see and to have compassion” for others and do not spend their time “pointing fingers at others, comparing them to the priest or the Levite.”

Christians should not only “recognize when we have been indifferent and have justified ourselves,” but also pray and ask God “to help us overcome our selfish indifference” to become true followers of Christ, he added.

Pope Francis concluded his address by encouraging Christians not only to give alms to the poor but also to look in their eyes and truly empathize with them.

“If you give alms without touching the reality, without looking into the eyes of the person in need, those alms are for you, not for that person,” the pope said.

“Think about this. Do I touch misery, even the misery that I am helping? Do I look into the eyes of the people who suffer, of the people that I help? I leave you with this thought — to see and to have compassion,” he said.

Featured image: People in St. Peter’s Square cheer as Pope Francis leads the Angelus from the window of his studio overlooking the square at the Vatican July 10, 2022. In his remarks the pope said the parable of the good Samaritan is a call for Christians to “have compassion on those whom we encounter along the way, above all on those who suffer and are in need.” (CNS photo/Vatican Media)