“Great poverty” is produced by wars that strike the defenseless and vulnerable, Pope Francis say in message for World Day of the Poor.

VATICAN CITY (CNS) — War produces tremendous poverty, and its violence strikes those who are defenseless and vulnerable, Pope Francis said.

“In these situations, reason is darkened, and those who feel its effects are the countless ordinary people who end up being added to the already great numbers of those in need,” the pope said in a message for the World Day of the Poor.

The war in Ukraine is now one of several regional wars that “for years have taken a heavy toll of death and destruction,” the pope said in the message dated June 13, the feast of St. Anthony of Padua, patron saint of the poor. The Vatican released the pope’s message June 14.

“Yet here the situation is even more complex due to the direct intervention of a ‘superpower’ aimed at imposing its own will in violation of the principle of the self-determination of peoples. Tragic scenarios are being reenacted and once more reciprocal extortionate demands made by a few potentates are stifling the voice of a humanity that cries out for peace,” he wrote.

The World Day of the Poor — marked each year on the 33rd Sunday of Ordinary Time — will be celebrated Nov. 13 this year with the theme: “For your sakes Christ became poor.”

“What great poverty is produced by the senselessness of war!” the pope said in his message.

“Violence strikes those who are defenseless and vulnerable,” he wrote.

The impact can be seen in the “deportation of thousands of persons, above all young boys and girls, in order to sever their roots and impose on them another identity,” he wrote, and with the millions of women, children and elderly people “being forced to brave the danger of bombs just to find safety” elsewhere. “How many others remain in the war zones, living each day with fear and the lack of food, water, medical care and above all human affections?”

Pope Francis‘ message focused on the Christian responsibility to “respond adequately” and with joy to the needs of the poor so that “none of our brothers or sisters will lack the necessities of life.”

“Solidarity is sharing the little we have with those who have nothing, so that no one will go without,” he wrote.

One obstacle, however, is “a kind of laxity,” he said, which includes an attitude of outright indifference to the poor.

“It also happens that some Christians, out of excessive attachment to money, remain mired in a poor use of their goods and wealth. These situations reveal a weak faith and feeble, myopic hope,” he wrote.

The problem is not money itself, he wrote, but making money the “absolute and chief purpose in life.”

“Nothing worse could happen to a Christian and to a community than to be dazzled by the idol of wealth, which ends up chaining us to an ephemeral and bankrupt vision of life,” he wrote. 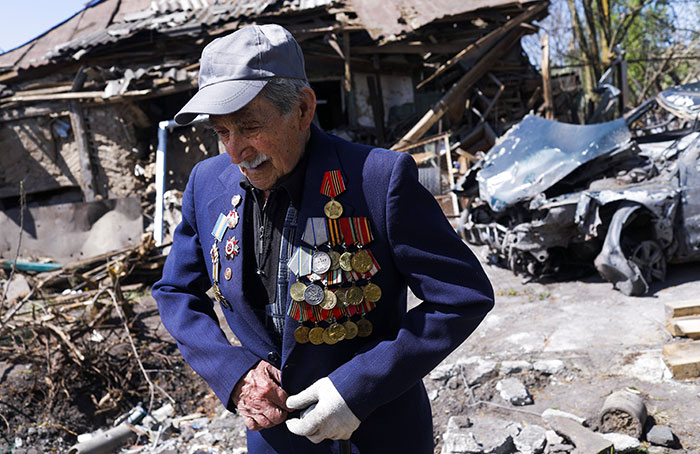 War World II veteran Ivan Lisun, 97, who was left homeless after Russian airstrikes destroyed his home, wears a jacket with his medals and pins outside his home in Zolochiv, Ukraine, May 6, 2022. The senselessness of war produces tremendous poverty, and its violence strikes those who are defenseless and vulnerable, Pope Francis said in message for the World Day of the Poor, which will be marked Nov. 13, 2022. (CNS photo/Ricardo Moraes, Reuters)

The Christian approach to the poor is not a kind of “welfare mentality” or a patronizing activism, but it involves a “sincere and generous concern that makes us approach a poor person as a brother or sister, who lends a hand to help me shake off the lethargy into which I have fallen,” the pope wrote.

Jesus shows “there is a poverty that humiliates and kills, and another poverty, Christ’s own poverty, that sets us free and brings us peace,” he wrote.

When profit is the bottom line, he said, others are seen “simply as objects to be exploited,” and “new forms of slavery emerge and entrap persons who lack alternatives and are forced to accept this toxic injustice simply to eke out a living.”

“The poverty that sets us free, on the other hand, is one that results from a responsible decision to cast off all dead weight and concentrate on what is essential” and value “the treasure that no one can steal from us: true and gratuitous love.”

“We are not in this world merely to survive, but to live a dignified and happy life,” he wrote, and if “we want life to triumph over death and dignity to be redeemed from injustice, we need to follow Christ’s path of poverty, sharing our lives out of love” beginning with love for those most in need.

“This is the way to create equality, to free the poor from their misery and the rich from their vanity, and both from despair,” he wrote.

He told reporters that he hoped the ongoing easing of restrictions aimed at curbing the spread of COVID-19 would mean the Vatican could once again set up temporary medical tents near St. Peter’s Square to provide free tests and care for those in need as they did before the pandemic.

Pope Francis is scheduled to mark the day with a special Mass Nov. 13, he said, and there will be initiatives throughout the week aimed at reaching out “to the many forms of poverty in his Diocese of Rome.”

Featured image: A woman from Rio de Janeiro disinfects the hands of a homeless man as she delivers him a meal April 11, 2020. The senselessness of war produces tremendous poverty, and its violence strikes those who are defenseless and vulnerable, Pope Francis said in message for the World Day of the Poor, which will be marked Nov. 13, 2022. (CNS photo/Lucas Landau, Reuters)