For returned Maryknoll Lay Missioner Merwyn De Mello, the withdrawal of the United States military forces from Afghanistan and its chaotic aftermath have been painful to watch. Yet, the influx of tens of thousands of refugees fleeing that country has also meant reconnecting with a people he considers among the most hospitable in the world.

Last summer, the world witnessed the chaos of throngs of Afghans swarming the Kabul airport, desperate to escape the country’s takeover by the Taliban. Having worked with his wife, Kirstin, in a peacebuilding project in Afghanistan from 2014 to 2017, De Mello felt “a great deal of sadness, anxiety, and concern” for people he knows there.

“The situation of my former colleagues is precarious,” he says, remembering the Afghans he worked with. He also worries about the Afghan people in general and what life will be like for those unable to leave.

“My fear, from my colleagues and friends to the common people like those selling vegetables on carts, is how are they going to live through this?” he asks. The plight of the people he had known and befriended while living in Kabul haunts him.

De Mello, who speaks Dari, which along with Pashto is one of the two official languages of Afghanistan, takes some solace in his personal experience of the Afghan people and the culture. “There is a great amount of resilience in the people,” he says. “So they find a way. They have survived decades of war and conflict and continue to find a way to exist and to live.”

“But,” he adds, this is “one of the most challenging times thus far in their turbulent history.” 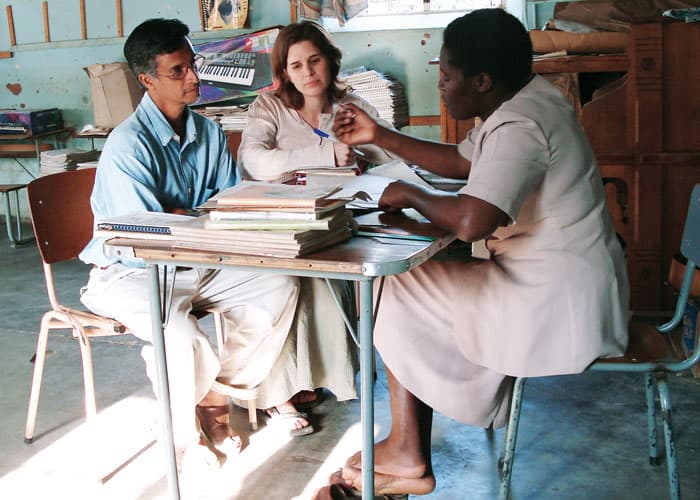 Merwyn and Kirstin De Mello receive a Shona language class from a teacher in a Jesuit parish near Harare, the capital of Zimbabwe. (Courtesy Merwyn De Mello/Zimbabwe)

“The need in some cases was pretty dire,” he says. “These were individuals with urgent need.” Some have pre-existing illnesses or conditions; others were injured just prior to the evacuation. Many carry the scars of trauma from their experience. To get to this site in the States, they had to transit through one or more countries, staying at military bases.

The goal, De Mello explains, was to help prepare the Afghans for resettlement in the United States. Services at the site included cultural orientation, English as a second language classes, orientation to the legal process and activities dedicated to the particular wellness needs of the women, men and children populations.

“I expressed my interest and was quickly integrated into the program because of my Dari language capacity and my familiarity with the Afghan culture,” he says. “An underlying value for me is my love and concern for the Afghan people.”

De Mello says his extensive cross-cultural experience was also a major asset in this service. Born in Kenya of Indian descent, his family moved back to India when he was 13 years old. He holds permanent residency in the United States. In 1994 De Mello began serving with the Maryknoll Lay Missioners, first in Japan and then in Tanzania. He and his wife were married in 2006 and served together with the lay missioners in Zimbabwe. After returning to the States, they served together with Community Peacemakers Teams (formerly Christian Peacemaker Teams) in Chicago. 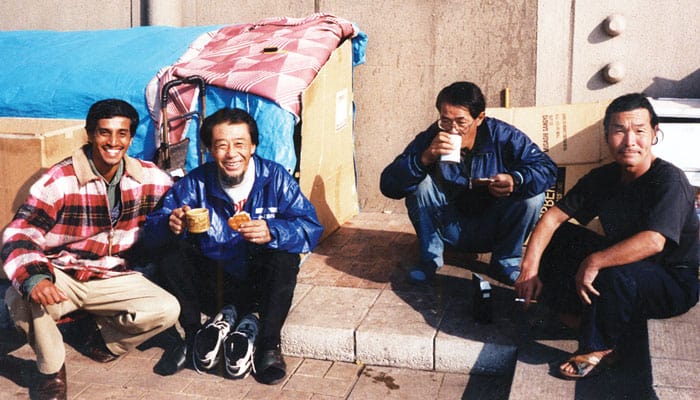 “We felt that our passion for overseas service was not over yet,” De Mello says. “When Afghanistan came up as a possibility, we were drawn toward it.”

The couple arrived in Kabul, the capital of Afghanistan, in 2014 as volunteers with the Mennonite Central Committee (MCC) assigned as peace advisors to a project of an MCC partner. They worked there until 2017, transitioning then to Bangladesh where they served until 2020, also as peace advisors.

“While I lived in Afghanistan, I interacted with all kinds of people in a variety of settings, as much as I could, given the stringent security measures,” he says. His Indian nationality, willingness to wear the Afghan male attire — the perahan shirt and tunban pants — and his growing dexterity with speaking Dari built bridges with the local people. The couple also made a point of getting to know their Afghan neighbors.

The relationships with their neighbors and local merchants and street vendors protected the couple, because people watched out for them, he says. “Sometimes I would be walking on the streets and a shop-owner or a vendor on a cart would pull me aside and say, ‘Please come and have tea with me … it’s better to sit in my house and have a cup of tea because we see some strangers roaming around. It is not safe on the street for you. OK?’ ”

That was part of the Afghan code of honor: to protect the guest and the foreigner, he says. “The hospitality and protection offered to a guest transcends differences of ethnicity, religion and economic status,” De Mello says. “Your being a guest in an Afghan home is a blessing from Allah to the family; protecting the guest is like an oath of honor.” 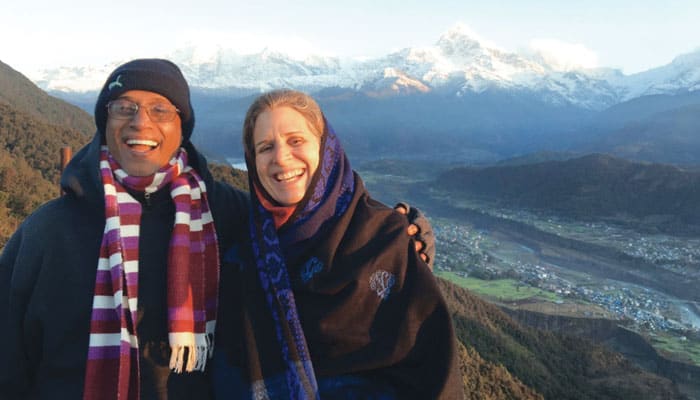 Merwyn and Kirstin De Mello, who worked in Afghanistan, are shown while on retreat in Nepal with the Himalayan Mountains in the background. (Courtesy Merwyn De Mello/Nepal)

“In all of the places where we have lived, we have received a warm and generous welcome,” De Mello says, “but we have never experienced elsewhere the kind of hospitality we experienced in Afghanistan.”

As De Mello worked with the new arrivals from Afghanistan, he again experienced the Afghan hospitality he had known in Kabul. While his work in Maryland involved providing cultural orientation, supporting English learning and helping with legal orientation, De Mello feels he also served as a bridge between the Afghans and other support staff serving them. He was able to form relationships with Afghan families.

Reflecting on the harrowing experiences of the Afghan refugee community, from the chaos of getting out of Kabul to their initial stays at U.S. military bases, De Mello says they still face an uncertain future. The Maryland site where he worked closed in March as the people were settled into homes in various cities across the country.

“This is a daunting phase for those in their resettlement environment, in their homes, having to negotiate the system for employment, money management, education, health care, transportation and immigration,” he says. “And additionally carrying anxiety and fear for the safety and security of loved ones left behind in Afghanistan.”

De Mello continues to accompany and support some Afghans who are at temporary residential sites or in their permanent homes. “I have learned so much from the richness of the Afghan culture, its tradition and customs,” he says. “I will continue to accompany at least those I got to know well, with whom I have forged a relationship.”

Featured image: Kirstin and Merwyn De Mello sit at the doorway of a mosque in Herat, Afghanistan’s third-largest city, an historic site along the Silk Road. (Courtesy Merwyn De Mello/Afghanistan)