The Vatican releases Pope Francis’ message for the upcoming World Day for Migrants and Refugees, calling for welcome and immigration reform.

VATICAN CITY (CNS) — Countries around the world must get serious about reforming their immigration policies to respect the rights of migrants and refugees and establish orderly procedures for welcoming newcomers, Pope Francis said.

“We cannot leave to future generations the burden of responsibility for decisions that need to be made now so that God’s plan for the world may be realized and his kingdom of justice, fraternity and peace may come,” the pope wrote in his message for the celebration Sept. 25 of the World Day of Migrants and Refugees.

Pope Francis’ message, focused on the theme “Building the Future with Migrants and Refugees,” was released at the Vatican May 12.

While welcoming migrants and refugees presents challenges in many countries, the pope wrote, doing so also can revitalize a nation and the local church and expand people’s knowledge of the world and its many cultures and religious traditions.

And, for Christians, he said, providing a dignified welcome and integrating newcomers into the community is part of their call to cooperate with God in building his kingdom.

God’s plan for the world and for humanity “calls for an intense work of construction, in which all of us must be personally involved,” the pope wrote. “It involves a meticulous effort aimed at personal conversion and the transformation of reality, so that it can correspond ever more fully to the divine plan.”

The world clearly is not close to being what the Book of Revelation describes as “the new Jerusalem, ‘the dwelling place of God with men,'” the pope wrote, but “this does not mean that we should lose heart.” 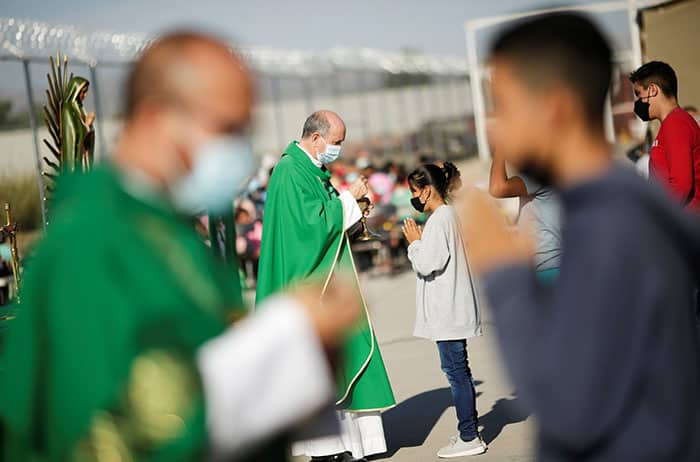 “In the light of what we have learned in the tribulations of recent times,” he said, “we are called to renew our commitment to building a future that conforms ever more fully to God’s plan of a world in which everyone can live in peace and dignity.”

“For this wondrous harmony to reign,” the pope said, “we must accept Christ’s salvation, his Gospel of love, so that the many forms of inequality and discrimination in the present world may be eliminated.”

In creating that future, migrants and refugees are not simply people in need, but are people who have much to contribute, the pope said.

“Indeed, history teaches us that the contribution of migrants and refugees has been fundamental to the social and economic growth of our societies,” Pope Francis wrote. The same is true today when newcomers’ “work, their youth, their enthusiasm and their willingness to sacrifice enrich the communities that receive them.”

The challenge, he said, is to “optimize and support” their contributions with “carefully developed programs and initiatives. Enormous potential exists, ready to be harnessed, if only it is given a chance.”

That potential is a gift to the Catholic Church as well, the pope wrote. “The arrival of Catholic migrants and refugees can energize the ecclesial life of the communities that welcome them,” bringing enthusiasm and sharing different devotions, which “offers us a privileged opportunity for experiencing more fully the catholicity of the people of God.” 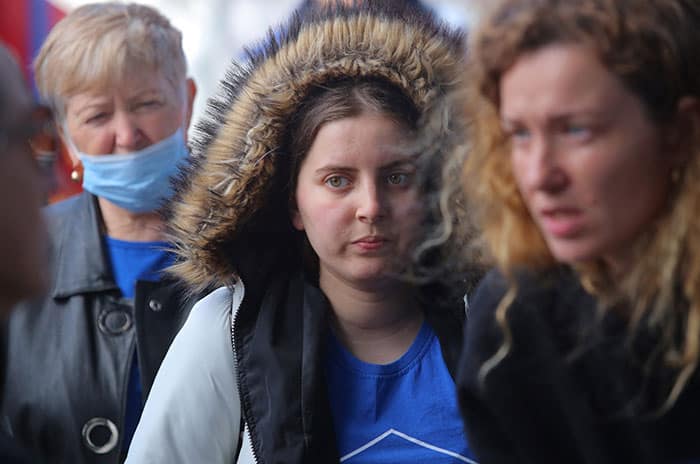 Ukrainian women seeking asylum in the United States wait in line to board a bus outside a shelter in Tijuana, Mexico, April 22, 2022. The Vatican has released Pope Francis’ message for this year’s World Day of Migrants and Refugees. (CNS photo/Jorge Duenes, Reuters)

At a Vatican news conference to present the message, Cardinal Francesco Montenegro, the retired archbishop of Agrigento, Italy, which includes the island of Lampedusa, told reporters, “The pope — and this is important — calls us to move from the logic of simple welcome to Gospel logic of universal fraternity in which ‘the other,’ particularly the poor, is a brother or sister with whom I am called to walk.”

“It will take effort to realize this,” he said, “but there are not those who welcome and those who are welcomed, but brothers and sisters who must learn to love each other and to make cultural, religious and social diversity an opportunity for growth for everyone.”

Scalabrinian Father Fabio Baggio, undersecretary of the Dicastery for Promoting Integral Human Development, was asked about the difference in how European countries and their people are welcoming refugees from Ukraine in comparison to the hesitation many have in welcoming migrants and refugees from North Africa and the Middle East.

“The Holy Father has repeated many times that a new crisis does not cancel the previous one,” he responded, and sooner or later Europe will have to come to grips again with its failure to find a truly shared response to the needs of those fleeing places other than Ukraine.

In addition, he said, it has been clear for years that categorizing migrants and refugees as “economic migrants” or “war refugees” or even the newer “climate refugees” does not reflect the complexity of factors that push people to seek safety and a better life for themselves and their families outside their homelands.