Pope Francis will be joined by the Anglican Archbishop of Canterbury and the leader of the Church of Scotland on the July 5-7 trip to South Sudan.

VATICAN CITY (CNS) — As violence in South Sudan continues to raise concerns, Pope Francis’ visit in July can serve as a much-needed boost for the hopes of millions who yearn for peace after decades of war and bloodshed, the country’s newest bishop said.

Bishop Christian Carlassare of Rumbek, who made headlines last year after he survived a failed assassination attempt, said the long-awaited papal visit will reassure the country that the Christian churches have no plans to abandon them.

Pope Francis, Anglican Archbishop Justin Welby of Canterbury and moderators of the Church of Scotland have wanted to visit the country since 2016. But political instability and the COVID-19 pandemic forced repeated delays of the trip.

The pope, the archbishop and the Rev. Dr. Iain M Greenshields, who takes office as moderator of the Presbyterian church in May, will visit South Sudan together July 5-7.

“I think the pope is coming here not just to see that peace is achieved but to ensure that the path to peace continues,” said Bishop Carlassare during an online meeting with journalists April 21.

“That is why it is necessary for the pope to come; to do everything to give a continuity to this call, to this invitation for peace. But above all, to bring that peace that is sought after by the politicians and give it to the people,” he said.

Italian-born Bishop Carlassare, 44, was shot in his legs at his residence in Rumbek April 26, 2021, slightly over a month after the Vatican appointed him to lead the diocese. The attack forced a yearlong delay of the Comboni priest’s ordination as the bishop of the diocese in central South Sudan.

Prior to his appointment, Rumbek had been without a bishop since 2011, following the death of Bishop Cesare Mazzolari, also a Comboni missionary. 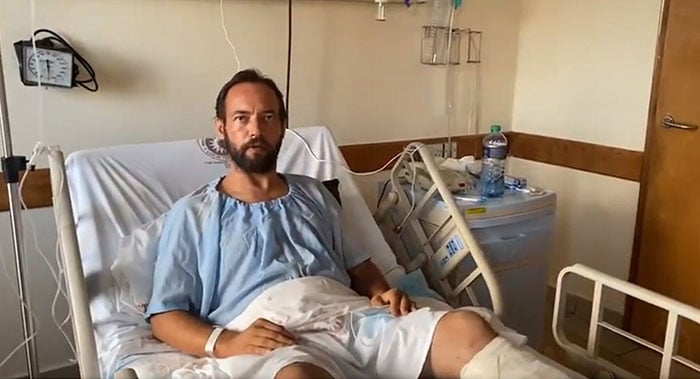 Italian-born Bishop Christian Carlassare of Rumbek, South Sudan, speaks from a hospital in Nairobi, Kenya, in a video message posted on Twitter April 28, 2021, as he recovered from being shot. Bishop Carlassare expressed hope that Pope Francis’ July 5-7 visit to South Sudan will give a much needed boost to peace in the country. (CNS photo/Comboni Missionaries)

A High Court judge in Juba ruled April 25 that a Catholic priest and three others — Father John Mathiang Machol, Moris Sebit Ater, Laat Makur Agok and Samuel Makir — were guilty of participating in the attack.

After his recovery in Nairobi and rehabilitation in Italy, Bishop Carlassare returned to Rumbek to begin his episcopal ministry. Despite the ordeal, the Italian bishop said he holds no ill will toward his attackers.

“The wounds I received were from people who are also wounded for some reason,” he said.

The experience, he said, inspired him to go around the diocese to listen and meet with the faithful to better “understand what has wounded this diocese, what are their fears and what are their needs.”

Peace cannot be achieved by “closing our eyes to what has happened. It is by looking for a justice that is, above all, reparative so that forgiveness is possible and never a punitive justice that doesn’t forgive. That would not help us,” he said.

South Sudan became independent from Sudan in 2011 after decades of war. But, just two years after independence, political tensions erupted into violence.

Bishop Carlassare said the pope and the Anglican and Presbyterian leaders had an impact on the peace process in the country after the Vatican hosted a spiritual retreat in April 2019 with the leaders of all the warring political factions and clans.

At the end of the retreat, the pope knelt and kissed the feet of the leaders of South Sudan, begging them to “remain in peace” and to “not be afraid” despite the many problems. 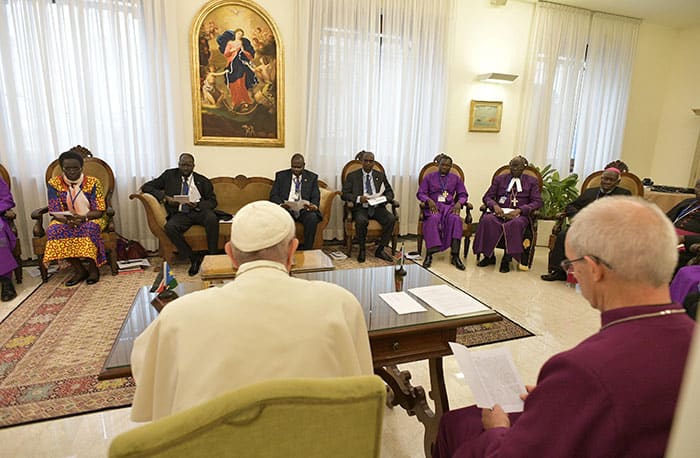 Pope Francis is seated next to Anglican Archbishop Justin Welby of Canterbury, England, spiritual leader of the Anglican Communion, during a meeting at the end of a two-day spiritual retreat with South Sudanese leaders at the Vatican in this April 11, 2019, file photo. (CNS photo/Vatican Media via Reuters)

The dramatic gesture shocked South Sudan President Salva Kiir, prompting him to tell the country’s parliament a month later that the pope’s planned visit “was a blessing and can be a curse if we play games with the lives of our people.”

Bishop Carlassare told journalists that prior to the retreat, the country’s leaders were “unable to come to an agreement” due to disputes over land size among the warring factions.

The pope’s request for peace brought much needed perspective to the peace process and a realization that finding an agreement “often means compromises and accepting perhaps a smaller slice (of land) so all may have a bit.”

Nevertheless, the bishop added, while the retreat “was a success, it is a success that must be repeated and renewed each year.”

With the visit drawing near, the people of South Sudan, after decades of suffering, need to know and understand that the church is near to them, he said, and the unity among the different Christian churches and communities in the country can become a powerful sign that peace is not an unrealistic goal.

“Many times, the South Sudanese people are divided within their own groups, and they believe their own tribal group or clan or ethnic group can give them more security than the government. There isn’t a lot of trust in the government,” Bishop Carlassare said.