The Diocese of Nuevo Laredo has put out an urgent appeal for humanitarian assistance for Haitians expected to surge at the U.S./Mexico border.

MEXICO CITY (CNS) — A Mexican border diocese has issued an urgent appeal for assistance as hundreds of Haitian migrants arrive in the oft-violent city of Nuevo Laredo, hoping to apply for asylum in the United States.

The Diocese of Nuevo Laredo warned of a “humanitarian crisis” in its April 29 appeal, saying in a brief message: “A large number of Haitian migrants have arrived in our city, and our brothers need our help.” The diocese asked for donations of personal hygiene items, masks and medicines.

“In Nuevo Laredo, all the shelters are being saturated,” said Father Eduardo Monsivais, diocesan spokesman. A migrant shelter run by the Scalabrinians normally can host 200 migrants, Father Monsivais said, but the crush of new arrivals is such that the diocese is repurposing a building to provide temporary housing.

The arrival of migrants in Nuevo Laredo, which borders Laredo, Texas, comes as the U.S. government prepares for the lifting of Title 42 May 23. Title 42 was imposed as a pandemic policy in March 2020 and allowed for migrants to be quickly returned to Mexico without being able to petition for asylum.

Advocates for increased border enforcement and members of the Biden administration expect the number of migrants and asylum-seekers arriving at the U.S. border to increase after more than two years of restricted access to the asylum process.

Homeland Security Secretary Alejandro Mayorkas told Congress April 27, “We expect migration levels to increase as smugglers seek to take advantage of and profit from vulnerable migrants.” The secretary also said: “Our department has been executing a comprehensive strategy to secure our borders and rebuild our immigration system.” 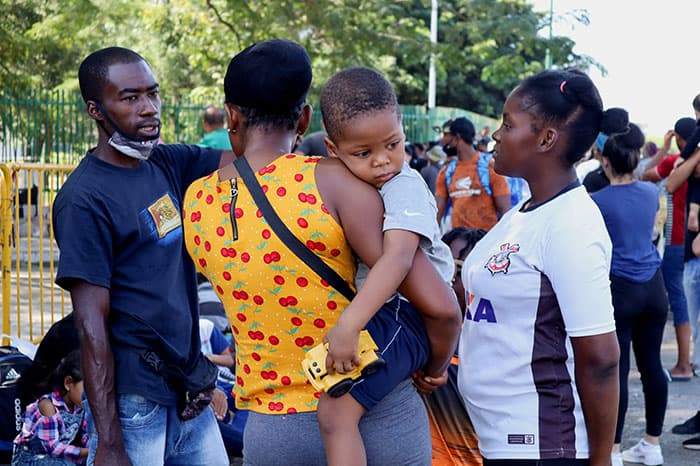 Haitian migrants line up as they wait for a QR code to register their migratory situation in Tapachula, Mexico, Dec. 29, 2021. The Diocese of Nuevo Laredo has issued and urgent appeal for assistance as hundreds of Haitian migrants arrive in the oft-violent city hoping to apply for asylum in the United States. (CNS photo/Jose Torres, Reuters)

Catholics working with migrants on the U.S.-Mexico border and in Latin America also expect more migrants to arrive at the border with the removal of Title 42.

Economic conditions had worsened in many countries, Father González said. “Two years of putting a break on migration due to health measures is now going to provoke a large flow” of migrants, he added.

The Tamaulipas state government said in a statement that some 529 Haitians with permission to be in Mexico had arrived in Nuevo Laredo.

In mid-April, Tamaulipas and three other border states reached agreements with Texas Gov. Greg Abbott to ease the slowing of border checkpoints. Texas had started inspecting trucks crossing the U.S.-Mexico border, causing economic losses in both Texas and Mexico.

Many Haitians have been stuck in Tapachula, near the Mexico-Guatemala border. Most of the Haitians had arrived in Mexico after spending time in South America and had not been in the Caribbean country for more than a decade, according to Catholics who work with migrants.

“Migrants here are often in danger due to the violence here in the city,” Father Monsivais said. They have to take risks to at least be protected in a shelter.

An October 2020 report from Doctors Without Borders found that three-quarters of the asylum-seekers it treated in Nuevo Laredo were victims of kidnapping.

Featured image: A young Haitian migrant girl traveling with her parents, seeking to reach the U.S., stands outside a temporary shelter at a church in Ciudad Juarez, Mexico, Dec. 20, 2021. The Diocese of Nuevo Laredo has issued and urgent appeal for assistance when Title 42 ends in May. (CNS photo/Jose Luis Gonzalez, Reuters)