WASHINGTON (CNS) — The chairman of the U.S. Conference of Catholic Bishops’ Committee on International Justice and Peace praised a May 16 statement announcing the lifting of restrictions against Cuba by the Biden administration, particularly those measures that will help family reunification.

The Biden administration said it will increase consular services on the island to help with visa processing “making it possible for more Cubans to join their families in the United States via regular migration channels.”

The State Department also announced plans to allow more people from the U.S. to engage with Cubans via group travel, allowing U.S. flights beyond Havana, and reinstating a remittance program for families in the U.S. to send up to $1,000 per quarter to family members on the island.

The move reverses restrictions imposed by the Trump administration, which had taken a more punitive stance on Cuba.

“We commend the administration’s renewed interest in restarting U.S. engagement with Cuba. Recognizing that points of contention remain between our two countries, Cuba’s punitive isolation has not produced the economic and social change that the United States has sought to effect,” said Bishop David J. Malloy of Rockford, Illinois, who chairs the USCCB’S international policy committee.

Under President Barack Obama, the U.S. paved a path of direct engagement with people on the island, reopening embassies in both countries and expanding opportunities for travel.

The Vatican, Pope Francis and the former archbishop of Havana, Cardinal Jaime Ortega, are said to have played a part in the reopening of diplomatic relations between the two countries.

“We are all happy because … we saw two nations, who were estranged for so many years, take a step to bring them close together,” said Pope Francis in December 2014, when the renewal of relations was announced. 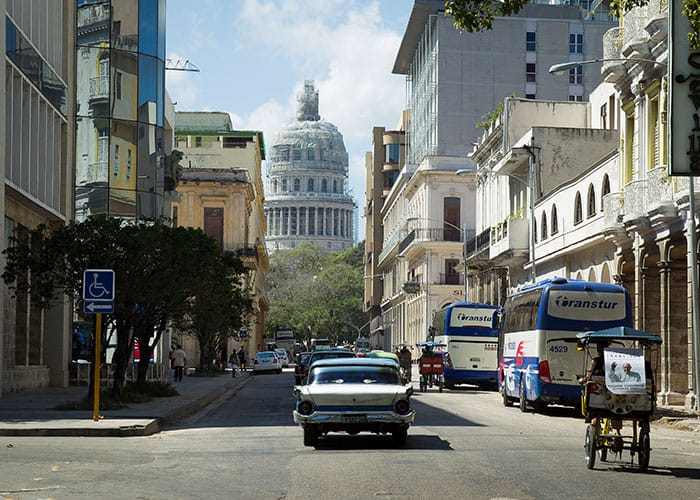 Cuba’s Capitol is seen under construction in Havana Sept. 19, 2015. The island country’s infrastructure suffers from decades of deterioration and the lack of much-needed repair. (CNS photo/Tyler Orsburn)

The USCCB has advocated for the U.S. engaging Cuba via dialogue, personal encounters between people, diplomacy and trade.

“The U.S. bishops, including the Cuban-American bishops, in conjunction with the Holy See and the bishops of Cuba, continue to stress the vital importance of bilateral engagement and mutually beneficial trade relations between the United States and Cuba as the key to transformative change on the island,” Bishop Malloy said in a May 19 statement.

He added that expanding travel opportunities for U.S. citizens, “as well as the lifting of onerous remittance limitations, will strengthen familial, economic and social ties between our countries. Cuba’s developing civil society and private sector depend on the leadership provided by active U.S. civil society engagement in Cuba.”

Some, like U.S. Sen. Bob Menendez, voiced disappointment with the announcement. The New Jersey Democrat, whose parents came to the U.S. from Cuba, said in a May 16 statement that the Biden administration’s announcement risked sending “the wrong message to the wrong people, at the wrong time and for all the wrong reasons.”

“For decades, the world has been traveling to Cuba and nothing has changed. For years, the United States foolishly eased travel restrictions, arguing millions of American dollars would bring about freedom, and nothing changed,” he said.

The USCCB, in its published “backgrounder on Cuba,” explained that it “has long held that universal human rights will be strengthened through more engagement between the Cuban and American people.”

The bishops’ conference said that over the years, it has denounced crackdowns on the Cuban people and their right to dissent. But engagement will do more than “past U.S. policy of isolation.”

The USCCB, like its counterpart on the island, the Cuban bishops’ conference, also has opposed the U.S. embargo against Cuba, saying that “the principal effect on the embargo has been to strengthen Cuban government control and to weaken an already fragile civil society and economy, thereby hurting the most vulnerable.”

Featured image: People gather near the White House in Washington July 25, 2021, during a protest calling for freedom in Cuba and urging U.S. President Joe Biden to do more to pressure the Cuban regime. (CNS photo/Tyler Orsburn)