Pope Francis has invited Ukrainian and Russian families, among others, to lead a Station of the Cross for this Good Friday’s Via Crucis.

Ukrainian and Russian families will carry the cross together during the Stations of the Cross led by Pope Francis at Rome’s Colosseum on Good Friday.

The Vatican has published the meditations and prayers for the pope’s Via Crucis, or Way of the Cross, which will focus this year on the many “crosses” of family life.

The meditations include reflections from a couple without children, a family with a disabled child, a family with an ill grandparent, a family of migrants, and families suffering due to the Ukraine war.

For the 13th station, “Jesus dies on the Cross,” a Ukrainian family and a Russian family will read a reflection that they wrote together about how their lives were upended by the pain of war. 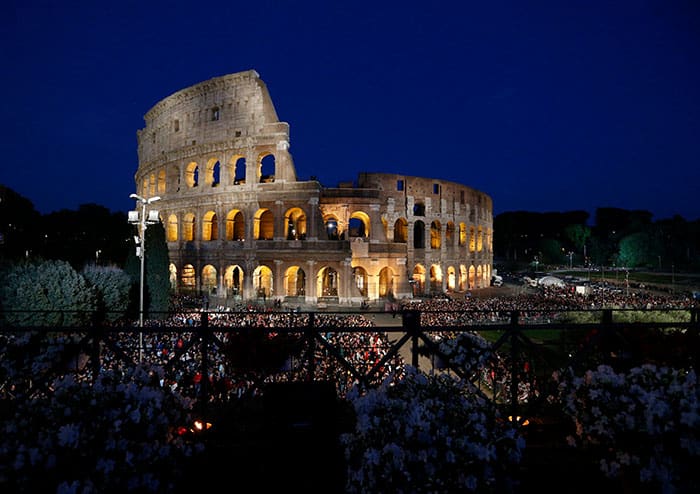 People gather outside Rome’s Colosseum April 19, 2019, before Pope Francis leads the Way of the Cross. People following the Stations of the Cross at the Colosseum this year will find a message of hope, including with a Russian and Ukrainian family carrying a cross together at the nighttime ceremony. (CNS photo/Paul Haring)

“Why has my land become as dark as Golgotha? We have no tears left. Anger has given way to resignation,” the text of the reflection says.

“Lord, where are you? Speak to us amid the silence of death and division, and teach us to be peacemakers, brothers and sisters, and to rebuild what bombs tried to destroy,” it says.

The prayer following the meditation calls Jesus’ pierced side a “wellspring of reconciliation for all peoples” and asks God that “families devastated by tears and blood may believe in the power of forgiveness.”

The two families, whose home countries are at war, will carry a wooden cross together for the 13th station in the Colosseum before passing it to a family of migrants, who will carry the cross for the final station.

The plans for Ukrainian and Russian families to carry the cross together drew criticism early this week from the head of the Ukrainian Greek Catholic Church and from the new Ukrainian ambassador to the Holy See. Major Archbishop Sviatoslav Shevchuk said: “I consider such an idea untimely, ambiguous, and such that it does not take into account the context of Russia’s military aggression against Ukraine.”

Shevchuk’s comments followed those of Andrii Yurash, the Ukrainian ambassador to the Vatican, who expressed concern about the format of the Way of the Cross in a social media post on Tuesday. He wrote that “we are working on the issue trying to explain difficulties of its realization and possible consequences.”

On Friday at 9:15 p.m., Pope Francis will preside over the Stations of the Cross at the Colosseum, a Roman practice dating back to the pontificate of Benedict XIV, who died in 1758.

This is the first time that the pope is returning to the Colosseum on Good Friday since the outbreak of the COVID-19 pandemic. In the past two years, papal liturgies during Holy Week were kept very small due to pandemic restrictions.

While in the past, the pope himself used to carry the cross from station to station around the Colosseum, it is now carried by individuals and families.

This year’s cross-bearers include a widow, a family that lost a child, a young married couple, and a missionary family.

According to the Vatican, 15 families were selected to write the Stations of the Cross meditations to mark the Amoris Laetitia Family Year, which will conclude on June 26 with the 10th edition of the World Meeting of Families, which will be held in Rome.

Featured image: Rome’s Colosseum is illuminated during the Way of the Cross in this March 30, 2018, file photo. After two years of the COVID-19 pandemic, the Via Crucis will return to the Colosseum on Good Friday April 15, 2022. (CNS photo/Paul Haring)

Catholic News Agency (www.catholicnewsagency.com) was founded in 2004, in response to Pope St. John Paul II’s call for a “New Evangelization." CNA provides news affecting the Universal Church, giving particular emphasis to the words of the Holy Father and happenings of the Holy See. It is owned and operated by EWTN Global Catholic Network.