In an anguished letter to Pope Francis, Major Serhiy Volyna writes of witnessing scenes of violence in Mariupol that compare only to hell.

VATICAN CITY (CNS) — A Ukrainian Marine commander pleaded with Pope Francis to do everything to save the city of Mariupol, which is close to being captured by Russian forces.

“I am turning to you for help because the time has come when prayers are not enough,” Maj. Serhiy Volyna, commander of the 36th Separate Marine Brigade, wrote in a letter published April 18 by the Ukrainian online newspaper Pravda.

The commander’s letter to the pope was also shared on Twitter by Andrii Yurash, Ukraine’s ambassador to the Holy See.

Russian forces have focused their attacks on eastern Ukraine, particularly Mariupol. If captured, the port city would connect the Donbas region with Crimea, which was annexed by Russia in 2014.

In his letter, Volyna said he had not read about the pope’s appeals to the world on Ukraine’s behalf because he had “been fighting for more than 50 days, completely surrounded, and all I have time for is a fierce battle for every meter of this city that is surrounded by the enemy.” 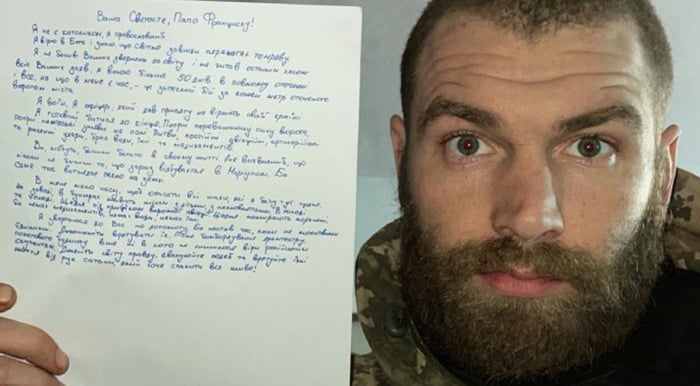 Maj. Serhiy Volyna, commander of Ukraine’s 36th Separate Marine Brigade, holds a letter he wrote to Pope Francis. In his letter, published April 18, 2022, by the Ukrainian online newspaper Pravda, Volyna pleaded with the pope to save the people of Mariupol. (CNS photo/Ukrainska Pravda)

“I am a warrior. I am an officer who took an oath of allegiance to his country. And I am ready to fight to the end. (I do so) despite the overwhelming force of the enemy, despite the inhumane conditions on the battlefield, the constant artillery and rocket fire, the lack of water, food and medicine,” he wrote.

He also wrote that while he is sure Pope Francis has seen a lot in his life, “I am sure that you have never seen the things that are happening to Mariupol, because this is what hell on earth looks like.”

“I have little time to describe all the horrors I see here every day. Women with children and babies are living in bunkers at the factory, they are hungry and cold. Every day they are living in the sights of enemy aircraft. The wounded die every day because there is no medicine, no water, no food,” Volyna wrote.

Volyna urged Pope Francis to aid the people of Mariupol and to bring the world’s attention to the atrocities committed by Russian forces.

“Bring the truth to the world, evacuate people and save their lives from the hands of Satan, who wants to burn all living things,” he wrote.