LVIV, Ukraine (CNS) — The obvious signs of war crimes committed by Russian forces in Bucha and other Ukrainian cities led members of the Ukrainian Council of Churches and Religions to call Russia a “terrorist state” and to plea once more to NATO countries to provide Ukraine with the weapons necessary defend Ukraine and defeat Russia.

“We pray for the complete victory of Ukraine over this evil, for the defeat of the Russian occupying forces, for the downfall of the people-hating regime in Russia (and) for the enlightenment and repentance of the Russian people, who have been victimized by Russian propaganda,” said a statement adopted by the council April 6.

“Hundreds, perhaps thousands, of innocent Ukrainians were tortured and killed in the weeks of Russian occupation,” they said.

The victims include people, with their hands bound, shot in the head, as well as women and girls who appear to have been raped before being killed. The European Union has promised to assist Ukraine in conducting an investigation for war crimes,  while Russia continues to claim that the dead were killed by Ukrainian forces after the Russians had left.

The joint statement followed the declarations of individual Catholic and Orthodox leaders April 5 after videos and photographs of the scenes in Bucha were widely circulated and, in several cases, verified by professional journalists.

“The whole world was horrified to see what was happening in Bucha,” said Archbishop Mieczyslaw Mokrzycki, the Latin-rite archbishop of Lviv. He called “on everyone to pray for those who gave their lives, for all those who suffered, for peace, for the motherland. I think that God will give us the long-awaited peace, and the sacrifice will not be in vain.” 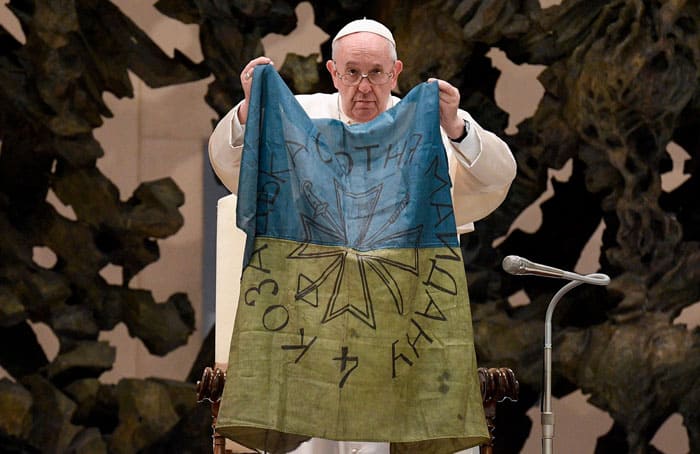 Pope Francis holds a Ukrainian national flag from Bucha during his general audience in the Paul VI hall at the Vatican April 6, 2022. (CNS photo/Vatican Media)

At his April 6 general audience, Pope Francis once again pleaded for an end to the bloodshed and violence in Ukraine.
“The recent news of the war in Ukraine, instead of bringing relief and hope, attest to new atrocities, such as the massacre of Bucha,” the pope said. The world is witnessing “ever-more horrendous acts of cruelty done against civilians, unarmed women and children, whose innocent blood cries out to heaven and implores, ‘End this war. Silence the weapons. Stop sowing death and destruction.'”
Archbishop Sviatoslav Shevchuk, major archbishop of the Ukrainian Catholic Church, said Russia’s war on Ukraine “has a clear ideological basis – this has been said in recent days at the highest levels of the Russian government. This war is a denial of the existence of a multimillion-strong Ukrainian people.”

Archbishop Shevchuk called for the establishment of an international war crimes tribunal to investigate and prosecute the perpetrators.

Metropolitan Epiphanius of Kyiv, head of the independent Ukrainian Orthodox Church, condemned not only the atrocities but also the “Russian World” teaching espoused by Russian Orthodox Patriarch Kirill of Moscow and President Vladimir Putin, which sees an expanded role for Russia in the region, even at the cost of subjugating Ukraine.

Metropolitan Onufry of Kyiv, head of the Ukrainian Orthodox Church tied to the Moscow Patriarchate, told the news site Glavkom that “grief filled my heart” when he read about what happened in Bucha.

Murderers and rapists will face “the judgment of God, from which no one can hide,” he said, without mentioning Russia or its troops.

Featured image: A man mourns next to the grave of his friend in Bucha, Ukraine, April 6, 2022. The Ukrainian Council of Churches and Religious Organizations as well as individual religious leaders have condemned the atrocities apparently committed by Russian troops in Bucha and other cities. (CNS photo/Alkis Konstantinidis, Reuters)