Pope Francis, who avoids inflammatory rhetoric against Russia, questions the concept of just war and calls for reconciliation, not escalation.

No matter how much one reporter pressed Pope Francis on the plane to Rome from Malta, asking, “What would be your message to Putin?” “What would you say to him?” the pope didn’t bite, insisting everything he has already said to every leader is on public record.

Jesuit Father Antonio Spadaro, editor of La Civiltà Cattolica, explained the next day that the pope wants to be a peacemaker, which is why “he does not attack religious and political leaders.”

The pope has condemned this and every war, “but he wants to piece and put together, not cut off,” the priest wrote in an editorial April 5 in the Italian daily, “Il Fatto Quotidiano.”

Instead of issuing a personal rebuke on the plane, the pope told the reporter, “I think that behind your question there is also doubt about just and unjust wars.”

And for Pope Francis, “There is no such thing as a just war: they do not exist!” as he told educators March 18.

“The Gospel only asks us not to look the other way,” he said; the war now “is on our doorstep. What am I doing?”

What are Catholics and people of goodwill to do when name-calling, taking sides and buying more weapons are off the table?

“I fully understand Pope Francis saying that we should get away from this ‘just-unjust’ war, from taking sides and using, what I would call, the ‘logic of war’ language,” which is common in “the Anglo-Saxon debate,” he told Catholic News Service by phone April 5. 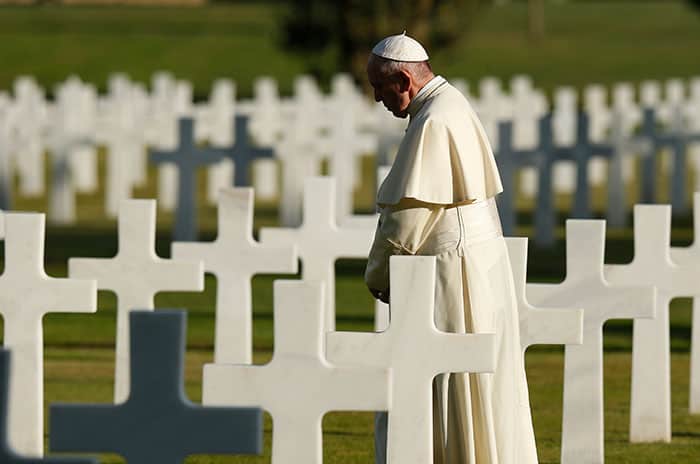 Pope Francis prays in the Sicily-Rome American Cemetery in Nettuno, Italy, in this Nov. 2, 2014, file photo. The pope has condemned all war, saying that a just war does not exist. (CNS photo/Paul Haring)

Instead of trying to justify or align oneself with a “just war,” he said, people should be orienting and conforming their actions toward “the idea of just peace.”

The horrors of war compelled Popes Benedict XV and Pius XII to push for establishing peace through law and to eradicate the old idea of “just war,” which argued “you might need force to implement a legal order,” Justenhoven said.

Since then, the church has been advocating building a “peaceful international order on the basis of international law,” not on aggression, said Justenhoven, who also teaches theology at the Albert-Ludwigs University of Freiburg.

“This, I would say, is the blueprint of peace that we have to look at,” and it was the great hope when creating the United Nations, he said. “The idea of the United Nations” is the closest humankind has come to responding to “what the Sermon on the Mount is demanding in today’s world.”

Every nation has the right to self-defense, he said, and “it is the duty of the international community to defend Ukraine as an act of solidarity.”

However, the U.N. Security Council — the mechanism established to maintain international peace and security — cannot approve a decision if one of the five permanent member states vetoes a resolution. This is what happened when Russia vetoed the resolution demanding it immediately stop its attack on Ukraine and withdraw all troops.

Even though now “the international community is blocked,” Justenhoven said, “the rest of those who are ready to help Ukraine to defend itself are called to do whatever is necessary.”

However, the problem is “if we were siding with the Ukrainian army against the Russian army, we would risk a nuclear escalation and that is why, for good reason, many heads of state are hesitant to actually do what is necessary,” he said.

This difficult situation falls in the realm of “political pragmatism” and “political prudence” and is outside the church’s domain, he said. “Where the church actually should stay and where we are” is respecting the right of self-defense and promoting aid for the victims of aggression.

Justenhoven was asked about a possible distortion of the notion of self-defense, given Russian Orthodox Patriarch Kirill’s repeated remarks that Russia is defending itself along with its values and God’s truth. 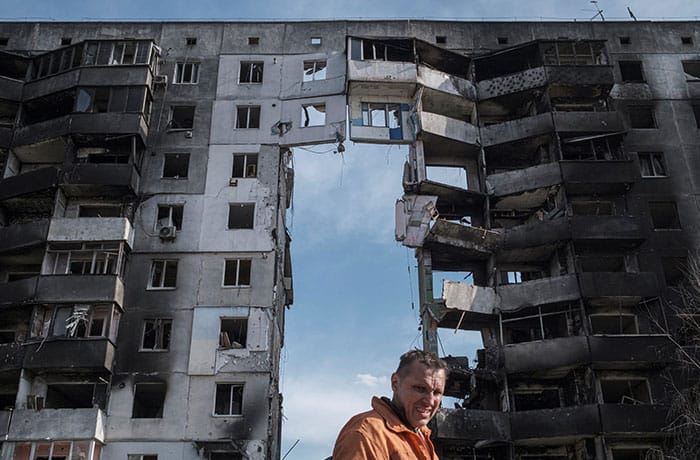 A clean up worker walks past buildings that were destroyed by Russian shelling in Borodyanka, Ukraine, near Kyiv, April 7, 2022. (CNS photo/Marko Djurica, Reuters)

“Even though he uses the words, ‘defense against,’ we would say that’s exactly the reason why we abstain from the ‘just-war’ language, because everybody would claim that ‘We, the authority of the state, are entitled to decide whether there is a just case or not.’ And in the end, you have an all-out war, everybody against everybody,” he said.

Pope Francis, in fact, has not focused much on the right of self-defense, but has made scattered remarks about his “respect” for and “understanding” of this “political problem.”

But he also showed frustration on the flight from Malta that despite everyone’s dream for peace, few seem willing or capable of “thinking of the pattern of peace.”

“We are in love with wars, with the spirit of Cain,” the pope said.

“Every war stems from an injustice,” which includes investing in weapons, he said. “Some people say, ‘But we need them to defend ourselves.’ And this is the pattern of war.”

The European Defense Agency’s most recent report said defense spending among its 26 member states reached its highest level ever in 2020, with total defense spending at 198 billion euros, a 5% increase from 2019. And Russia’s latest aggression against Ukraine has only served to spur more increases.

When the pope cries out for an immediate end to violence and a courageous wager on peace, he’s not talking just about the conflict in Ukraine, “he’s talking to us, as well, the international community and, honestly, we haven’t done enough to overcome violence, to overcome war,” the German theologian said.

When individual nations or coalitions are left to aid a nation under attack, “it can always be denounced by the other side as an illegal war,” he said. “Only if it is mandated by the United Nations is there a chance to say, ‘OK, we have this institution, it’s impartial, all the states are organized within it,'” and its mandate is based on international law.

“We need the international institutions, the means to really enforce international law as a collective means,” he said. “It’s our only way to get out of the circle of violence.”