Among the 12,000 Salvadorans detained for gang-related charges during the three weeks before Holy Week, some were picked up randomly.

SAN SALVADOR, El Salvador (CNS) — The statue of Jesus, blindfolded and cuffed, ubiquitous during Holy Week processions here, hit close to home for Gabriela Rivas. Like many women in El Salvador, Rivas spent Holy Week looking for help for her husband, detained without cause by government authorities April 10, Palm Sunday, she said.

“We don’t know what condition he’s in, we have access to nothing, there’s no communication, no visits,” and no way to get him out, said Rivas, a Catholic mother of two, in an April 15 interview with Catholic News Service.

Rivas’ husband is one of more than 12,000 Salvadorans the government has detained since March 27, the day legislators approved an emergency law that made detentions in the Central American country easier. Government authorities said the move was necessary to battle gang violence following a weekend that set a record number of homicides in late March.

But Rivas said her husband was not a terrorist or a gang member. He was a bus driver trying to provide for his family when the government unjustly detained him using the emergency law.

The measure suspends for 30 days constitutional freedoms, such as the right to assemble, due process and privacy in communications, and it threatens to detain suspected gang “collaborators.”

Many in the Central American country of about 6 million have applauded the arrests showcased in the president’s Twitter account with photos of some of those detained sporting gang-affiliated tattoos. But recently, Marvin Reyes, a representative of the Salvadoran Police Workers Union, told news agencies that police officers have been pressured to give “false statements” in order to meet a quota of detentions. 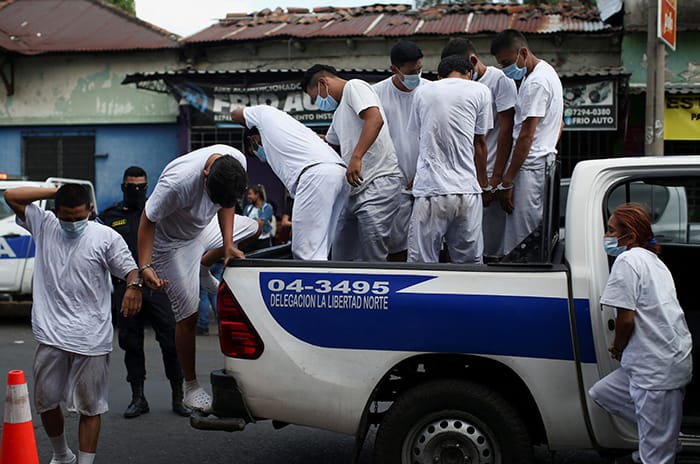 Handcuffed men climb out of a police pickup truck outside a detention center in San Salvador, El Salvador, March 31, 2022. More than 12,000 Salvadorans have been detained by the government since March 27 in an effort to battle gang violence. (CNS photo/Jose Cabezas, Reuters)

Rivas believes that is what happened to her husband, who has no criminal record and no affiliation with gangs. He was just a number to add to a quota, she believes.

“An official told me he was detained because of the friendships he had,” she said, adding that an officer made up the accusation, signaling her husband, not as a gang member, but a “collaborator,” without proof.

Bukele acknowledged via Twitter the “1%” likelihood that some innocent people may be detained under the mass detention, but that’s normal under any circumstance, he said.

Among the most notable of the questionable detentions was an April 9 incident involving four baristas captured as they headed home after a shift. Authorities photographed them handcuffed, wearing the uniform of the popular coffee shop where they worked, uploaded their photos to Twitter, identified the young men as gang members and said their tips were proceeds from illegal activity. Following public outcry, however, the baristas were freed.

The newspaper El Diario de Hoy also reported April 11 the case of a Salvadoran visiting from the U.S. with his nephew, a minor from Virginia. Both were detained when police raided a fundraising event for a person suffering from kidney disease. Friends and acquaintances took to Twitter to raise awareness of their detention, but there’s no word on whether they have been freed.

Some say police officers have been going door to door in some of the poorest neighborhoods in the country, asking which residents have tattoos, since gang members use them to identify with a particular criminal group.

Like a lot of Salvadorans, Rivas said she’s sick of the gangs and the misery they have unleashed, largely on El Salvador’s poor, but she said stomping on the basic rights of the innocent to wipe them out is wrong.

“We agree with the government, that they fight the gangs, but there should be some kind of a serious investigation, a warrant, something that says ‘we’re going to detain you for this reason’ before taking someone away. There’s no (due) process,” Rivas said.

In an April 17 news conference, Archbishop Jose Luis Escobar Alas of San Salvador compared the detentions to “bitter medicine,” saying they had been deemed necessary to stop the level of violence. He said he had spoken to “many people” who saw “hope” in what was happening. 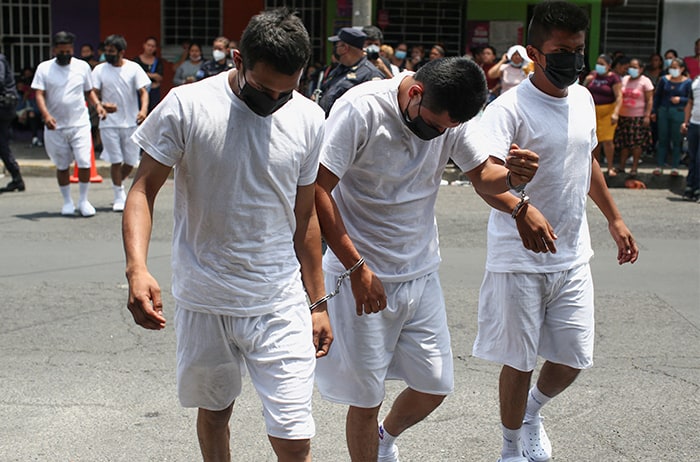 Handcuffed men walk into a police detention center in San Salvador, El Salvador, March 31, 2022. One police union representative said officers have been pressured to give “false statements” in order to meet a quota of detentions. (CNS photo/Jose Cabezas, Reuters)

“I have been able to talk with people, people who ride the bus daily or who have small businesses, etc., and the truth is, all these people, they tell me they agree (with the measures), that they feel happy, they are grateful because they feel a sense relief from the situation,” he said. “They say that they now feel they can walk about safely. That must be said, and, well, it also must be said that the violence in this country is a real problem.”

The Salvadoran Catholic bishops’ conference has been silent on the matter, though some bishops publicly prayed for the families whose loved ones have been detained without proof, and others, such as Cardinal Gregorio Rosa Chavez, urged the government to seek dialogue with other actors in civil society.

Some argue that the emergency measures have been used to target and curtail the media, which the president and the Nuevas Ideas party he founded have repeatedly attacked.

In an April 5 statement, U.S. Secretary of State Antony Blinken warned the government against some of the violations of rights that have suffered while in pursuit of criminal elements.

“Gangs pose a threat to the national security of El Salvador and the United States,” he said. “We urge El Salvador to address this threat while also protecting vital civil liberties, including freedom of the press, due process and freedom of speech.”

He also urged the Salvadoran government to allow the extradition of certain gang leaders in the country “to face justice in the United States,” a request that has been refused.

Archbishop Escobar Alas said his hope is that lawyers will be able to straighten out any cases that have involved the detention of innocent people, and he urged the government to provide information to families on the whereabouts of their loved ones.

For those like Rivas, however, the damage already has been done. She’s hired a lawyer, which has taken money away from an already precarious economic situation for the family. The lawyer told her to collect statements from neighbors, friends, anyone so that once her husband is allowed to have a day in court, perhaps community support can free him, much like the baristas were freed. Her children have been crying, so have her in-laws, and she’s worried about the economic havoc the situation has unleashed on her family.

“He has two children who depend on him, a bank loan that needs to be paid,” and even though she contributes to the family’s monthly income, he’s the one who pays the majority of the monthly bills, she said.

“He was never involved in problems, even when he was young, much less now that he’s an adult with children to support,” she said. “This has affected us a very regrettable manner. We never expected this.”