Publishing a two-page plea to the country’s leaders, Peru’s bishops wrote, “Our weak democracy cannot stand the instability any longer.”

“Our weak democracy cannot stand the instability any longer,” the bishops wrote. “It is crucial that both the executive branch and the legislative branch bring together people who are well-qualified and above reproach” for top government jobs.

Special interests must be set aside, they said, “in order to establish an agenda of priorities that respond to the basic needs of the population, especially those who are poorest,” and which guarantee stable governance.

The April 21 message came a day after the country’s prime minister referred to Cardinal Pedro Barreto Jimeno of Huancayo as a “miserable” person, after the cardinal spoke publicly about a meeting he had had with President Pedro Castillo.

Castillo, a rural elementary schoolteacher and teachers’ union leader with no government experience, won the presidency in 2021 just months after a standoff between the executive and legislative branches caused the country to have three presidents in 10 days. The president has been battling congressional opposition, as well as accusations of corruption and criticism for placing political cronies in top government jobs. 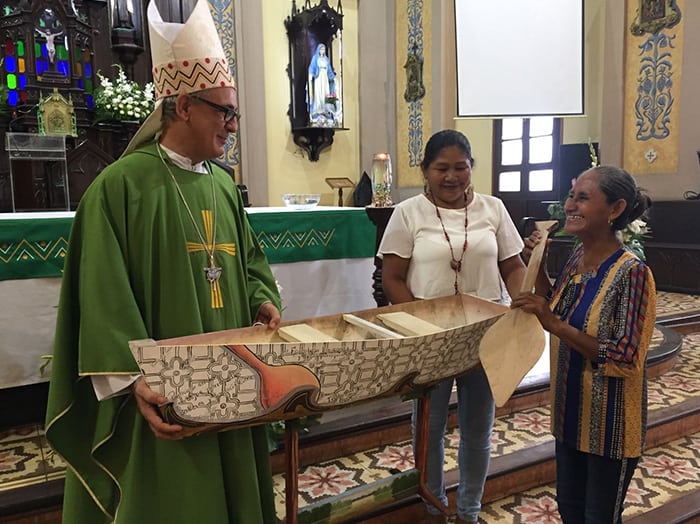 Bishop Miguel Angel Cadenas of Iquitos, Peru, talks with Emilsen Flores (right) and Mari Luz Cañaquiri, leaders of a Kukama women’s organization, after a Feb. 13, 2022, Mass in Iquitos. In mid-April, the bishops said Peru’s poorest and most vulnerable citizens suffer most from the nation’s political instability. (CNS photo/Barbara Fraser)

Rising fuel and food prices and shortages of fertilizer, exacerbated by the COVID-19 pandemic and the war in Ukraine, have led to strikes and roadblocks by transportation workers and farmers in recent weeks. Protests also have shut down several copper mines in a country where mining is a key source of revenue, and an air traffic controller’s strike snarled airports and caused flight cancellations during Holy Week, a peak travel time.

Cardinal Barreto met with Castillo April 14 at the president’s invitation to discuss the ongoing political crisis. After the meeting, the cardinal told reporters that he expected the president to make a “radical change” in his government, including forming a new Cabinet less connected to the Peru Libre party. Such a shakeup, which would usher in the fifth Cabinet in less than a year, would likely mean the ouster of Prime Minister Aníbal Torres, who serves as Cabinet chief.

Cardinal Barreto’s comments drew criticism from the leader of Castillo’s Peru Libre party, who questioned the church’s involvement in politics, as well as from Torres, who later said his reference to the cardinal as a “miserable person,” when he apparently had forgotten the prelate’s name, had been misinterpreted.

In their message, the bishops wrote that “the poorest and most vulnerable citizens are the ones who suffer the greatest impact from the consequences of this political instability,” and added that measures to create jobs and stimulate the economy have fallen short. 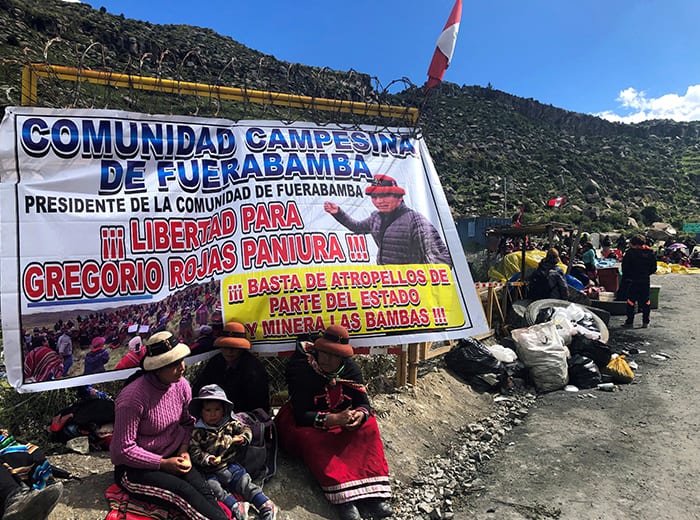 Demonstrators block a road access to a copper mine during a protest in Fuerabamba, Peru, March 29, 2019. Recent protests have shut down several copper mines in a country where mining is a key source of revenue. (CNS photo/Mitra Taj, Reuters)

The bishops called on the country’s political leaders to “address current events with greater responsibility: setting aside selfish interests; reaching consensus about the political reforms that are necessary to get the country moving forward; and establishing radical measures against corruption.”

Although they did not refer directly to the number of high-level government jobs filled by members of the Peru Libre party, the bishops wrote that, according to the Peruvian Constitution, the president “represents all of us equally, not one group, not subordinate interests, much less political-party quotas, which only undermine our weak institutional system.”

The president’s job, they added, is “to work for the general welfare of the Peruvian people.”

In a sentence printed in boldface, underlined and set off with exclamation marks, the bishops called for the president and members of Congress to “assume your responsibility for which you have been elected!”

Democracy, they said, should lead people to seek the common good, freedom of expression, separation of powers and respect for human dignity. In earlier remarks to reporters, Cardinal Barreto said that responsibility lies not only with the president and Congress, but with all Peruvians.