Refugees International tells of famine, population displacement and acts of atrocities being suffered in Tigray, Ethiopia.

NAIROBI, Kenya (CNS) — As Catholic officials in Tigray continue to call for meaningful peace talks and an end to atrocities and the humanitarian aid blockade, an international refugees organization is warning that Eritrean refugees in the northern region have nowhere to run.

Refugees International, a global organization advocating for displaced and stateless people, said in a report released March 3 that the humanitarian situation in Tigray was abysmal, with atrocities similar to war crimes displacing at least 2.5 million people inside and out of the country.

“The Ethiopian government has blocked virtually all food and medical shipments into Tigray, using food as a weapon of war,” Sarah Miller, a senior fellow with Refugees International, said in the report, “Nowhere to Run: Eritrean Refugees in Tigray.”

With starvation deaths mounting each day, she said in the report, and nearly 900,000 people in famine conditions, there are fears that the current situation in Ethiopia will mirror the Great Famine of the 1980s, when more than 1 million people died of starvation. 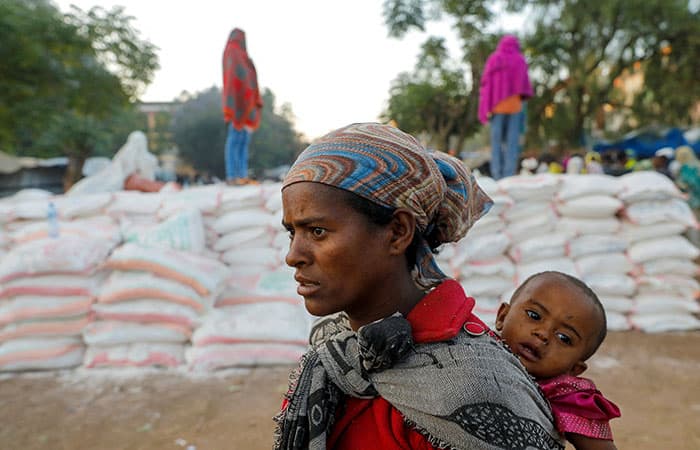 A woman carries an infant as she stands in line for food at the Tsehaye primary school, which was turned into a temporary shelter for people displaced by conflict, in the town of Shire, in Ethiopia’s Tigray region, in this March 15, 2021, file photo. (CNS photo/Baz Ratner, Reuters)

“The world should continue to be shocked at what is taking place in Tigray — manmade famine is something that should outrage all of us, including people of faith,” Miller told Catholic News Service in an interview, while underscoring the role of faith groups in responding to the crisis and refugees in particular.

“Religious leaders inside Tigray and around the world have raised their voices in support of those suffering as a result of the humanitarian blockade. They should continue speaking out as much as they are able and sharing information with their communities about what is going on,” she added.

Her views resonated with those of Catholic clergy from the region.

“We have statements indicating that half of the population in Tigray will die of starvation by the end of this year. In a literal sense, yes: We think this is a direction things may take if things continue as they are,” said a cleric who could not be named for security reasons.

In a raft of measures, Refugees International wants the U.N. High Commissioner for Refugees to reconsider moving the refugees to new camps near active war zones. It also suggests quick resettlement of the refugees and neighboring countries, including Kenya and Sudan, to open their doors to them.

Miller said faith groups in the U.S. can voice support for refugees and welcome them, “including by helping them to find housing, jobs, and enrolling in school, etc.”

She said that, while the situation in Ukraine is dire, the world should not forget the crisis in Ethiopia.

“We hope that people will look beyond the headlines and remember that the crisis in Ethiopia is not over for those facing famine, internal displacement, and for specific refugee groups, including Eritrean refugees in Ethiopia, who need international protection and assistance and immediate access to their rights,” she said.

Featured image: A woman stands in line to receive food donations at a temporary shelter for people displaced by conflict, in Shire, in Ethiopia’s Tigray region, in this March 15, 2021, file photo. A new report from Refugees International says: The humanitarian situation in Tigray is abysmal. (CNS photo/Baz Ratner, Reuters)