Catholic bishops around the world to join Pope Francis in consecration of Ukraine and Russia to the Immaculate Heart of Mary.

VATICAN CITY (CNS) — Pope Francis will consecrate Russia and Ukraine to the Immaculate Heart of Mary during a penitential prayer service in St. Peter’s Basilica on Friday, March 25, the Vatican said.

On the same day, the feast of the Annunciation, Cardinal Konrad Krajewski, the papal almoner, will carry out a similar consecration at the Shrine of Our Lady of Fatima in Portugal.

The pope has asked bishops around the world to join him in consecrating Ukraine and Russia to the Immaculate Heart of Mary, something bishops in every part of the globe had started announcing the minute they heard what the pope had planned.

“Pope Francis has invited the bishops of the whole world, along with their priests, to join him in the prayer for peace and in the consecration and entrustment of Russia and of Ukraine to the Immaculate Heart of Mary,” Matteo Bruni, director of the Vatican press office, said.

According to the Vatican’s translation of the messages of Fatima, when Mary appeared to the three shepherd children in Fatima in 1917, she told them, “God wishes to establish in the world devotion to my Immaculate Heart. If what I say to you is done, many souls will be saved, and there will be peace.”

Warning of “war, famine, and persecutions of the church and of the Holy Father,” Mary told the children, “to prevent this, I shall come to ask for the consecration of Russia to my Immaculate Heart.” 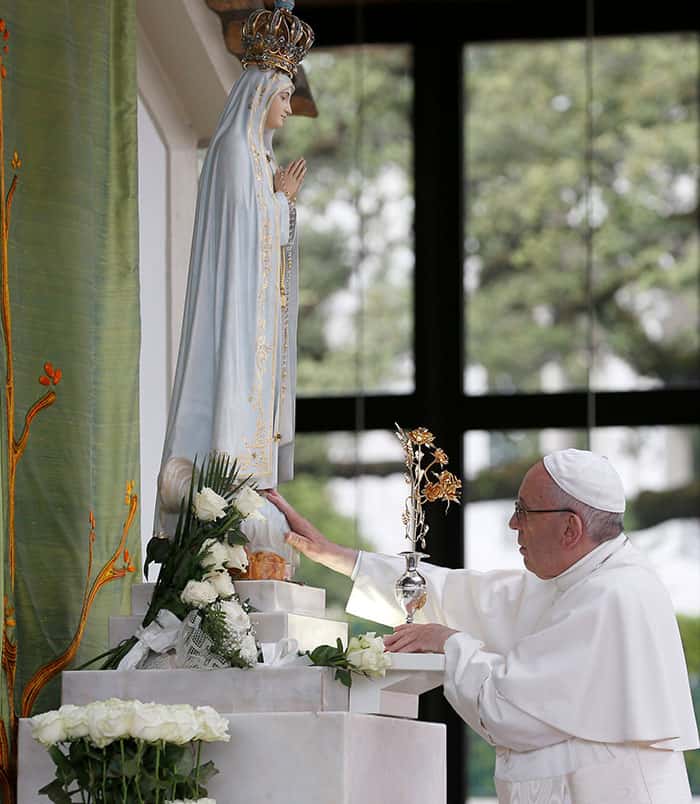 Pope Francis places flowers near a statue of Mary as he prays in the Little Chapel of the Apparitions at the Shrine of Our Lady of Fatima in Portugal May 12, 2017. The Vatican said Pope Francis will consecrate Russia and Ukraine to the Immaculate Heart of Mary March 25, 2022. (CNS photo/Paul Haring)

While Pope Francis and bishops around the world will consecrate themselves and all humanity to the Immaculate Heart of Mary, they will include the phrase, “especially Russia and Ukraine.”

The key passage of the text of the pope’s prayer reads: “Mother of God and our mother, to your Immaculate Heart we solemnly entrust and consecrate ourselves, the church and all humanity, especially Russia and Ukraine.”

Some groups have continued to argue that Mary’s wish at Fatima was never fulfilled or that it was never done properly because the pope consecrated the world and not “Russia.” The Vatican, however, has insisted St. John Paul II did so in 1984 when he led the world’s bishops in the consecration of Russia and the world.

Before her death, the last surviving visionary, Sister Lucia dos Santos, insisted — in letters published in the Italian Catholic magazine 30 Giorni and in person to Cardinal Tarcisio Bertone — that the consecration had been performed correctly in 1984 by St. John Paul.

The papal text pleads with Mary to “accept this act that we carry out with confidence and love. Grant that war may end, and peace spread throughout the world.”

The Eastern- and Latin-rite Catholic bishops of Ukraine had been asking Pope Francis for the consecration. Archbishop Sviatoslav Shevchuk of Kyiv-Halych, head of the Eastern-rite Ukrainian Catholic Church, said, “Ukrainian Catholics have been asking for this act since the beginning of Russian aggression in 2014 (in Crimea and Eastern Ukraine) as urgently needed to avoid the worsening of the war and the dangers coming from Russia.”

“With the invasion of Russia on a massive scale,” he said, “prayers to do this came from all parts of the world from our faithful.”

The country’s Latin-rite bishops published their appeal to Pope Francis on March 2, telling him that their priests, religious and laity all asked that he “consecrate our motherland and Russia to the Immaculate Heart of Mary.”

In a brief March 16 statement following a two-day plenary in Irkutsk, Russia’s Catholic bishops welcomed the pope’s decision with “joy and gratitude,” and called on Catholic parishes and communities across the country to schedule “appropriate prayers” and individuals to combine prayer with fasting and “deeds of love.”

“We call on all Catholics, remembering that ‘reality is always higher than ideas,’ in the words of Pope Francis, to strive for mutual understanding and be heralds of the word of reconciliation,” they said.

At Pope Francis’ Sunday recitations of the Angelus since Russia invaded Ukraine Feb. 24, people have been showing up in St. Peter’s Square with signs asking the pope for the consecration of Russia or of Russia and Ukraine to Mary.

The Fatima message promised: “If my requests are heeded, Russia will be converted, and there will be peace; if not, she will spread her errors throughout the world, causing wars and persecutions of the church. The good will be martyred; the Holy Father will have much to suffer; various nations will be annihilated.”

But, the message continued: “In the end, my Immaculate Heart will triumph. The Holy Father will consecrate Russia to me, and she shall be converted, and a period of peace will be granted to the world.”

Featured image: A sign in St. Peter’s Square calls for the consecration of Russia and Ukraine to Mary, before the start of Pope Francis’ Angelus at the Vatican March 13, 2022.  (CNS photo/Paul Haring)