Deacon Carlos Campoverde, coordinator of the Hispanic Apostolate at the Church of the Assumption in Peekskill, New York, says, “I have worked my whole life in social ministry.”

Recently the deacon took yet another step in missionary discipleship by participating in a trip to the U.S./Mexico border with Maryknoll. “Hearing their cries, I became aware of our sisters and brothers’ pain there,” he says.

Deacon Campoverde’s faith grows from roots of mission planted in his home diocese, the Archdiocese of Cuenca, Ecuador. It all started, he says, when he joined his wife Ines volunteering at their parish there. “I entered a catechists’ group and I participated in the charismatic movement,” he explains. Their family life was transformed. 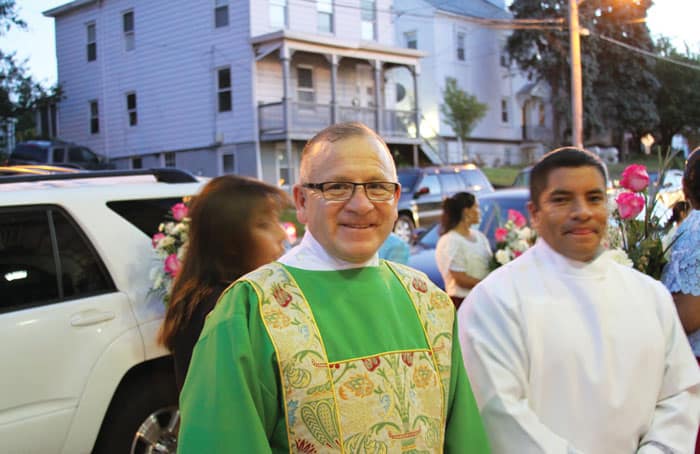 Deacon Campoverde, ordained in 2011 and pictured in 2014, serves on the parish staff of the Church of the Assumption in Peekskill, New York. (Giovana Soria/U.S.)

He got involved in diocesan social ministry programs preventing alcohol and drug abuse. He and Ines also went on mission trips to rural areas, visiting campesinos, taking their three young sons with them. His missionary call was awakened “right then and there.”

“I was a banker,” says Campoverde, who earned a degree in education at the Catholic University of Cuenca. “I left the bank. I wanted to work 100% for the Church.” He served in church-related work in Ecuador until he and his family emigrated to the United States in 1999.

Living in Queens, the family frequently visited friends and relatives in Peekskill’s growing Ecuadoran community. Maryknoll priests, whose headquarters are located nearby, came to say Mass in Spanish at the Church of the Assumption. Among the Maryknoll priests who have helped at Assumption, Campoverde names Fathers Richard Albertine and Rafael Dávila and the late Father José Arámburu. 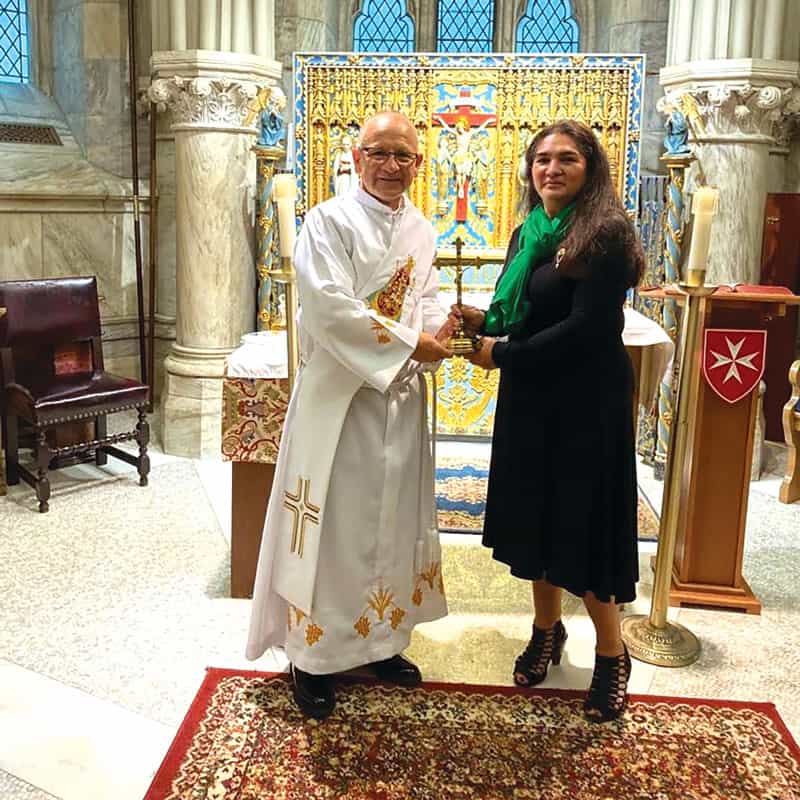 Carlos and his wife, Ines, served in a special Mass in honor of Ecuador’s Our Lady of Cisne, held in a chapel of Saint Patrick’s Cathedral in New York. (Courtesy Carlos Campoverde/U.S.)

“I was told to start with a needs assessment because there were a lot of Hispanics in Peekskill, but only 15 or 20 came to Mass,” Campoverde recalls. He went door to door, inviting Hispanic families to the parish. As Campoverde himself drew even closer to the Church, he studied for the permanent diaconate and was ordained in 2011.

“Carlos has been the key person in transforming the parish’s Hispanic ministry over the past 20 years, from very little participation to now a thriving community,” says Deacon Kevin McCarthy, who works in catechist outreach for the Maryknoll Fathers and Brothers.

“Our parish is a busy place,” says Father Sánchez, who adds that Hispanic Catholics come from miles around, attracted to the vibrant parish life at Assumption. The congregation includes Ecuadorans, Guatemalans, Mexicans, Dominicans and Peruvians. More than 600 children are enrolled in religious education, says Ines, who serves as program secretary.

Last August, Deacon Campoverde joined an immersion trip to El Paso, Texas, sponsored by the Maryknoll Society and led by the Encuentro Project, a faith-based organization that promotes understanding of border issues. The deacon did not anticipate how deeply the trip would affect him. “I was unprepared for what awaited me,” he says. “It was so painful, and so real.” He was particularly moved visiting the handicapped children at Santo Niño (Holy Child), a day center in Ciudad Juarez run by the Sisters of Charity of Cincinnati. 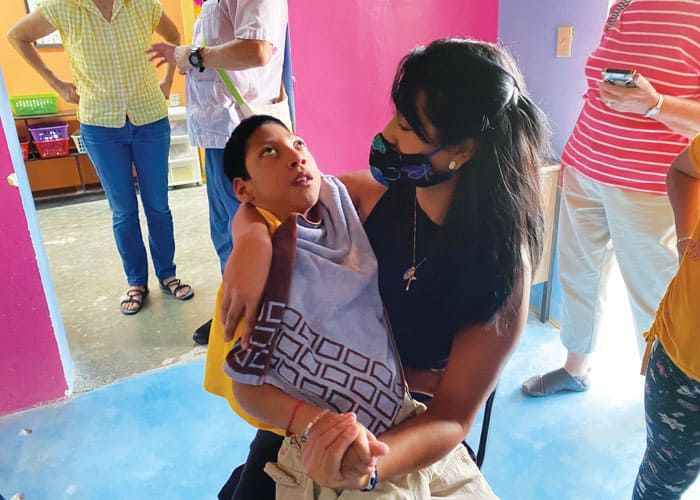 At Casa del Refugiado (Refugee House) in El Paso, Deacon Campoverde met a young family from his own home city, Cuenca. Traveling to the Mexican side of the border, the parents and their 4-year-old son had been kidnapped and held for ransom by organized crime. Once released, they pleaded for asylum at the border. After processing at a detention center, they were brought to Casa del Refugiado.

Thinking of families such as this, Deacon Campoverde says, “At night, I couldn’t sleep. I stayed up, thinking, ‘How can I free myself up, how can I change, to do more?’ ”

Returning to Peekskill, he continues with his responsibilities in the active parish. Now, however, he brings the border experience to his ministry. “Being there, I became aware, but returning, my goal is to make other people aware, too,” he says. “In our community, we are all immigrants.”

Last September, Deacon Campoverde and other members of the Hispanic community’s Open Hands-Migrant Ministry group held a vigil to recognize immigrant pioneers in their Peekskill community and to express concern for contemporary migrants. The group prayed for five people from the first Latin American families in Peekskill who had died recently and also prayed for newcomers. “We had funeral hymns and joyous songs, too. We sang, we prayed, and above all, we created solidarity,” he says.

He adds, “The Church does not abandon migrants.”