Some leading causes of the food shortages are armed conflict and climate change. While the violence resulting from the conflict has hurt livelihoods and caused deaths, climate change-induced floods have displaced families, swept away homes and farmlands. This has made it difficult for people to plant and harvest crops or replenish their food stocks.

And now, as the communities race to find food, humanitarian aid workers are being caught in the crossfire, with some being killed and aid convoys, warehouses and medical teams being attacked or looted.

“Aid workers are losing their lives and their service on the way, as the aid is robbed or looted because the people are desperate,” said Father James Oyet Latansio, a Catholic priest who is general secretary of the South Sudan Council of Churches. “They are not looting to go and sell the aid in the market, but to keep in their homes, so that they can eat.”

According to the U.N. World Food Program, an estimated 8.3 million people in South Sudan out of a population of 12.4 million will face extreme hunger in the coming months. The U.N. officials and some clerics warn that this is happening as the world is fixated on the war in Ukraine. 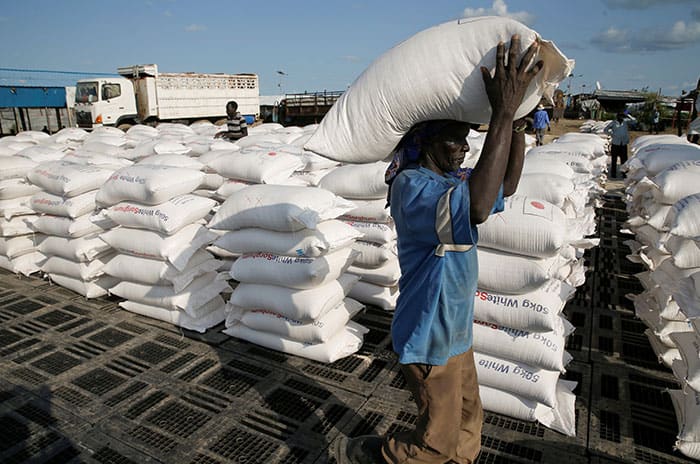 A man carries sacks of food aid for distribution to internally displaced people in near the town of Malakal, South Sudan, Sept. 9, 2018. (CNS photo/Baz Ratner, Reuters)

“The depth and extent of this crisis is unsettling. We’re seeing people across the country have exhausted all their available options to make ends meet, and now they are left with nothing,” said Adeyinka Badejo, deputy country director for the World Food Program in South Sudan.

Christian relief agencies — including Catholic agencies like members of the Caritas network — are some of the biggest movers of humanitarian aid in South Sudan. Catholic agencies contacted by Catholic News Service did not wish to comment for fear of putting their workers in danger.

On Feb. 28, medical teams from Doctors Without Borders were attacked by gunmen and two of their vehicles burned near Yei. The medical charity was forced to suspend operations outside the town. On the same day, a World Food Program convoy was attacked on a road in Jonglei; an escorting peacekeeper was injured.

“The food was there in the store, but the people could not wait for (the) day of distribution. They looted and took it to their homes. The food was made for 23,000 people,” said the priest.

At least 130 humanitarian workers, most South Sudan nationals, have been killed while on duty since 2013. At least five aid workers were killed last year in 370 recorded attacks.

On March 7, retired Bishop Macram Max Gassis of El-Obeid, Sudan, said priests and occupants in a convoy of clearly marked vehicles from a church humanitarian organization traveling in Abyei, South Sudan, were stopped twice by armed men and threatened at gunpoint. He urged all parties to respect church and humanitarian workers.